Home / Assessing the Flying Five & implications for the market

Assessing the Flying Five & implications for the market

A while ago I wrote a Halloween blog. It covered some of the historic anomalies that have occurred on the stock market this year. Here is the blog.

One of the observations I made was that the markets breadth has been narrow. That is, there has been a lack of broad participation by the stocks that comprise the major US indices as they put in new highs throughout the year.  I’ve noted that the classic “Dow Theory divergence” between the Dow Transports and the Dow Industrials has been presenting a sell signal lately. Here is my blog on that observation.

One point I brought up in my Halloween blog was that:

I’ve affectionately named these stocks the “Flying Five” (you heard it here first!). I wanted to take a look at the charts on these tech giants today. I’ll examine their potential for being overbought candidates.  Beyond being temporarily overbought, I wanted to find out how “healthy” their stock charts look for the longer term. Are any of these stocks exhibiting potential signs of being in a bubble that’s bound to implode? Given their obvious importance to the continued trend in the market, the health of these stocks matter to all market participants at this time, whether we own them or not. The question of their long termed trend sustainability is an important one.

The big picture:  Is the stock in an uptrend? How has its historical volatility looked?  Is it exhibiting a healthy series of price swing-corrections or is it parabolic?  Have overbought conditions within the larger uptrend been corrected normally? Black vertical lines on the charts below illustrate RSI over 70 and prices 10% over the 40 week SMA.

The neartermed picture: Is the stock too far over its 200 day (40 week) SMA (Simple Moving Average) at this time? Is RSI overbought right now?

With these objectives in mind, let’s get at it! 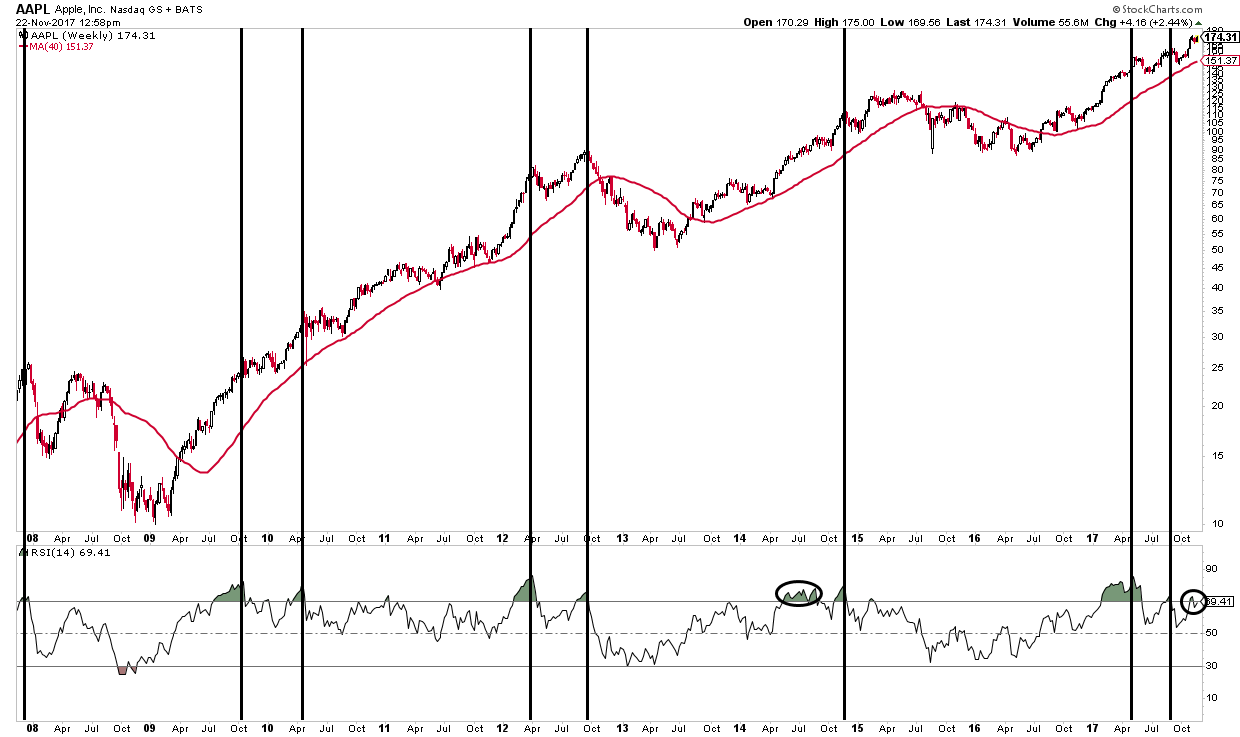 Apple has a healthy big-picture chart. Lots of price swings both large and small over the past 10 years. Even in the past year, its had some price swings. On occasion, the stock can go parabolic for a while – exhibited by its continued overbought conditions in 2014 (note how the RSI signal remained overbought from May-Sept in 2014). Typically, though, when the stock goes 10% or more above its 40 week SMA in conjunction with overbought and hooking down RSI- it corrects in a healthy manner.  It does look like its in that position right now. I’d not hesitate to buy this stock on a correction, and that correction may not be too far away. 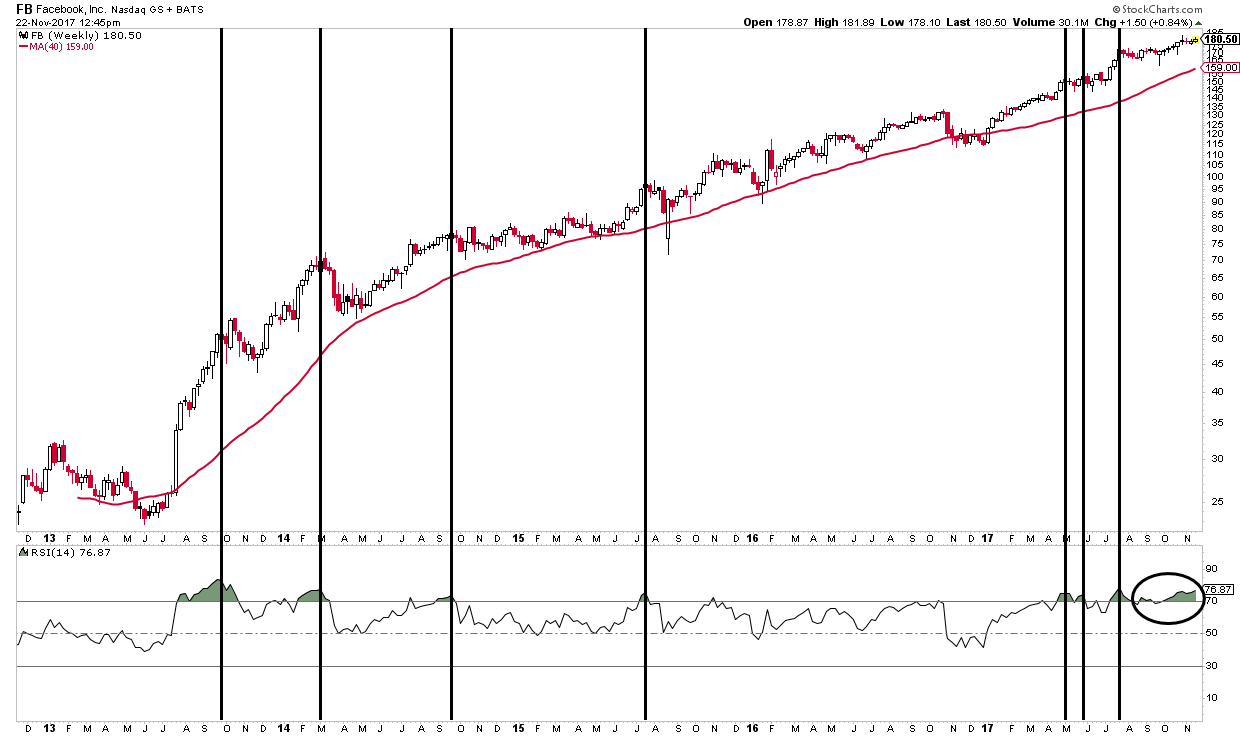 Facebook has a chart that, to my eyes, appears parabolic. Beyond a minuscule correction in July, the stock has moved in very tight formation.  The stock really hasn’t had any healthy corrections since the fall of 2016. Its currently 10% over its 200 day SMA, and its been overbought since August according to RSI. This stock is a likely candidate for the “too good to be true” award. Recipients of that award are destined to be a news headline in the bad way sooner or later, unless a normal series of healthy corrections (such as those seen on AAPL’s chart above) start to appear. 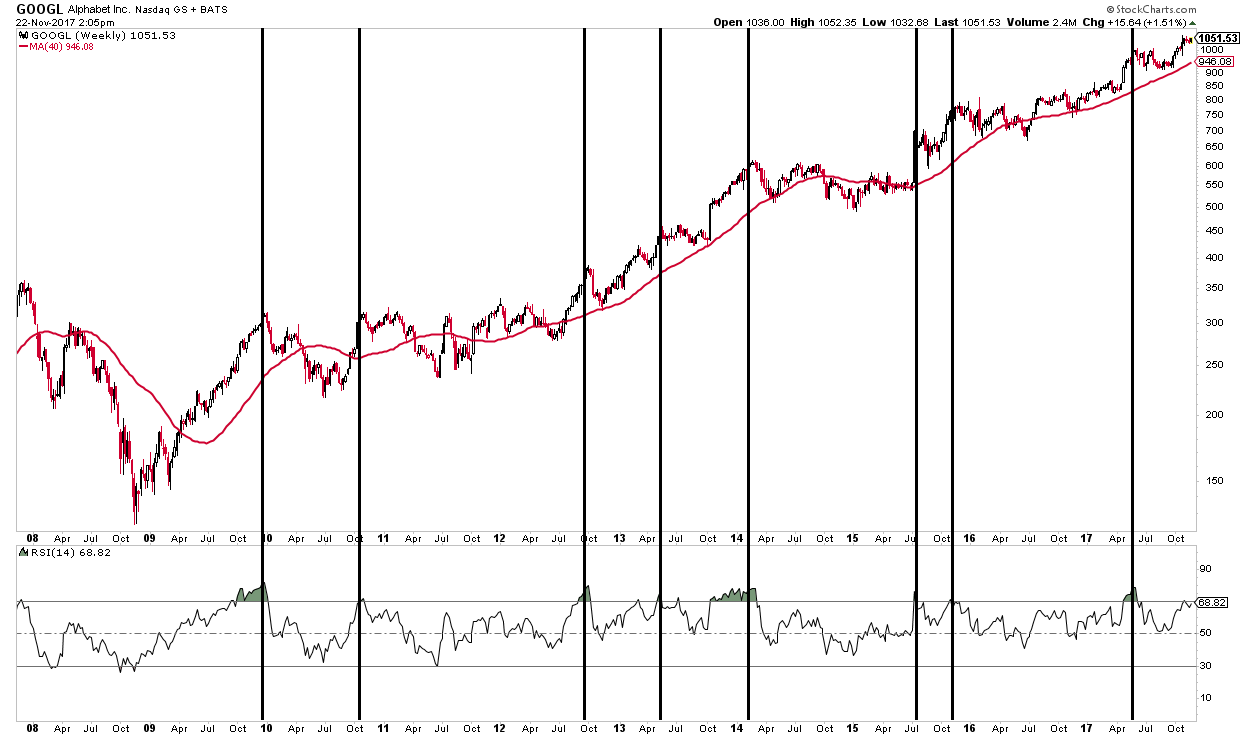 Google has a healthy big-picture. Like Apple, it sometimes corrects. You know, like stocks are supposed to do? The stock had a decent pullback in the late summer. The stock got overbought from a moving average and RSI perspective—and did what its supposed to do – pull back! Currently, it’s not overbought on the weekly chart—but it’s getting there. It’s probably good for a bit more upside but I’d prefer to wait with new cash. The stock is bound to correct as it gets back into overbought territory shortly. I wouldn’t hesitate to buy the stock on a correction. 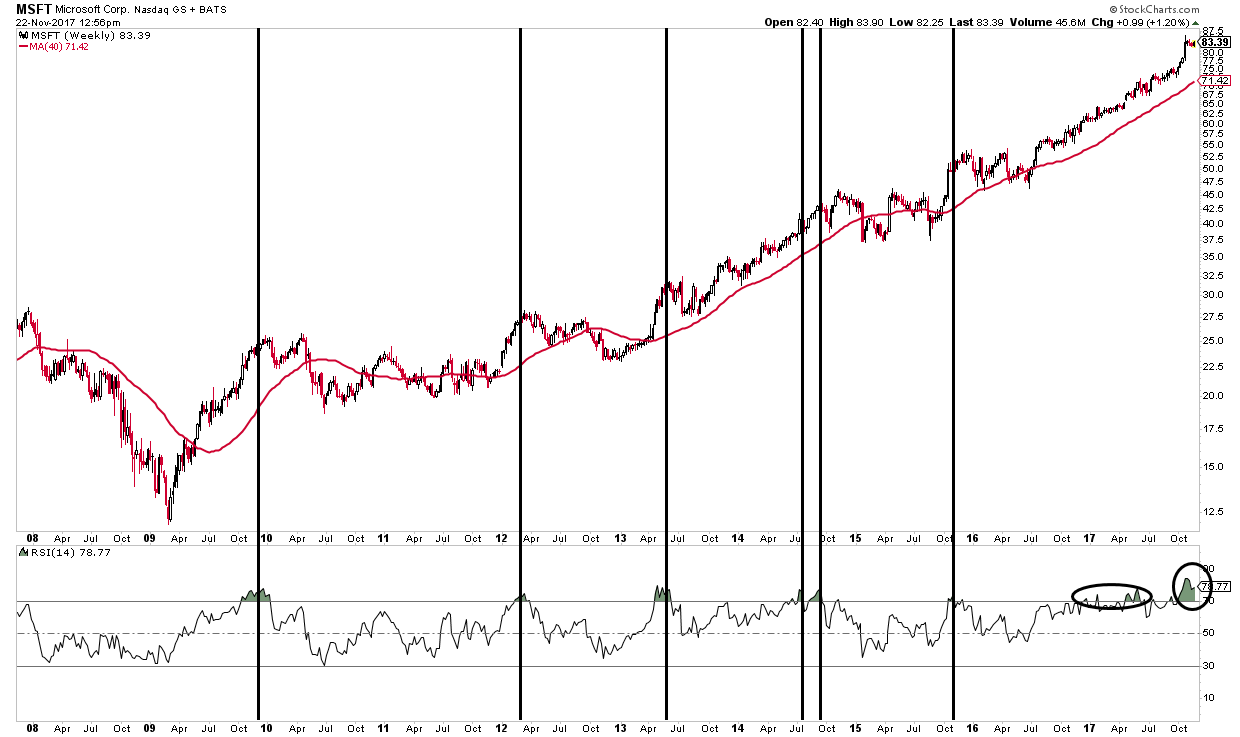 At ValueTrend, we hold a position in this stock. It’s the only one we still hold of this group. Having said that, the stock has gone parabolic since October of 2016. Overbought RSI and moving average distance signals matter not. This stock has been a rocket ship.  It recently jumped off of its already-tight trendline – and now its outright crazy-overbought! Yes, the RSI line is rounding over but no pullback yet. Another “too good to be true” picture- similar to Facebook. While I am glad that I didn’t sell the stock (and sorry I sold AMZN and GOOGL in the summer)—this is getting ridiculous. Damned if you do sell, but probably damned if you don’t – eventually. Yeah, I’m concerned. It won’t take much for me to push the sell button on this stock. 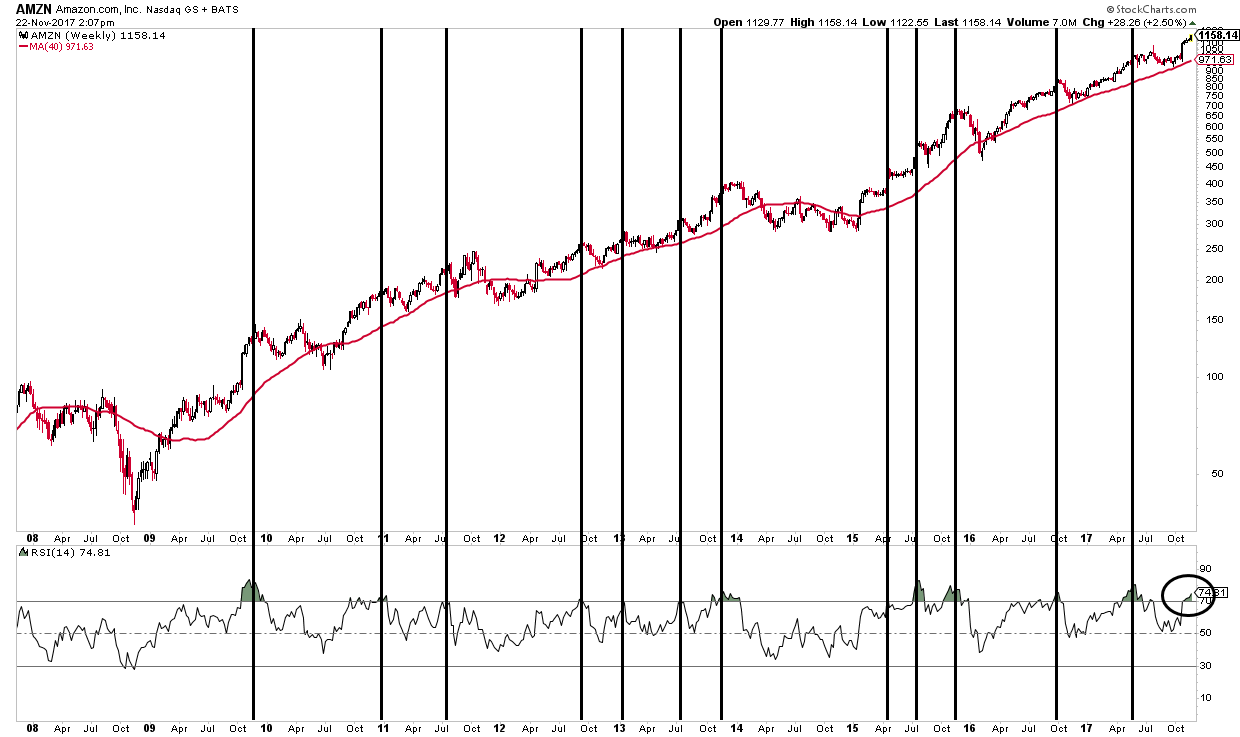 As noted above, we sold this stock, along with Google, back in the summer. Doh! Mind you, it did correct after we sold it, but we didn’t get back in. We focused on the seasonal tendency for tech’s to underperform at that time of the year. That, and the fact that our Bear-o-meter had a reading of “3” at the time. The Bear-o-meter was suggesting potentially higher risk on the markets.  So we avoided holding too much beta in the portfolio and we held cash. Hindsight being what it is – we should have jumped back into the stock by September as AMZN tested the 200 day moving average. The stock illustrates a good uptrend with normal, healthy corrections. It’s overbought again – according to the 40 week SMA and the RSI indicator. New money might want to wait for a correction. I will buy on such a move.

Examining the Flying Five stocks above, only Facebook and Microsoft are in the goofy-overbought category. The others are trending normally, and pullbacks will likely represent opportunities rather than sell signals. That changes, of course, if we get a lower low and a break of the 40 week SMA on the weekly chart. But for now, 3 outta five of these stocks look good. And that’s good for the markets.