Home / Ask me Anything: Part 2

Ask me Anything: Part 2

OK, lets get started with this second round of “Answers” from last weeks “Ask me Anything” blog. Thanks again to all those who asked a question. Be sure to check the comments of that blog if you don’t see your question answered on this or my last blog. Some of the questions were easily enough answered in a sentence or two – so I just posted the response in the comments section of that initial blog.

On with the show…

John asked about covered calls. I’ll quote his question: “Are most of the buyers of calls ( and puts) retail investors or does the option exchange get involved in providing a market for them? if so, since option buyers often lose, where do the funds for this market come from? are there enough funds from the option commissions to cover this need?”

I asked ValueTrend’s resident CFA and Fundamental Analyst Craig Aucoin to add his input on Johns question. Here is what Craig says:

Your observation refers to a very real difference between an equity exchange and an option exchange. The equity market is a public exchange for securities. The option exchange allows the facilitation of trades, both buys and sales. These derivative trades are based on an underlying security. This options market place has many more variables that contribute to establishing a price, one the big factors not present on equity exchange is time. It may appear that the retail investor is at a disadvantage but the contract entered into applies to the buyer and seller equally. The commissions you pay are more of a business factor related to your provider (dealer), rather separate from the exchange. The option exchange matches buyers and sellers and a clearinghouse essentially eliminates any credit risk from the trade.

Starting with the TLT – what we see below is a pretty straight forward looking picture. That is, a sideways market from 2015 – 2019, followed by a massive breakout that lasted to early this year. Since the start of 2020, the TLT has been contained between $160-$170, with occasional non-stickable spikes. Basically, the TLT is in a holding pattern.  With a lousy yield and no sign of life, it doesn’t seem too attractive to me.

Below is a chart of the Canadian long bond ETF, XLB. Beyond the massive spike, then drop in March of this year, the trend looks to be in tact for XLB. Like the US bond, it was treading water from 2015 to 2019. But the breakout thereafter has stuck. So far, anyhow. The recent candlestick is a longer bar to the downside. No doubt a reaction to the US bond selloff, and not helped by Canadian credit rating problems, as discussed here. Bottom line: I’d go Canadian long bonds for the time being, but I’d keep an eye on that trend line. There is very little upside in the bond market from here, but the Canadian bond ETF still offers about 2.8% CY – subject to change. TLT sits at 1.6% CY.

Real quick one here – Bruce wants to know my outlook for Canadian banks, and Ron asked about a spit corp for the banks.

First, I’ll note that I have never been a fan of those split corps issued on banks and other dividend paying Canadian sectors. They can be ill- liquid, and have differing items in their prospectuses you need to be aware of. I haven’t explored Ron’s specific security he noted that he holds. But I’d rather have the liquidity of an ETF, even if the yield is higher in the split corp. I always ask myself with split corp shares…”What do I actually own”? With a bank stock like RY or even an ETF, I do know I own shares of Royal Bank, or shares of (say) 6 banks in a basket marked to market by a market maker – and I can sell them right back to the market maker or fellow investor on the exchange if I want to ditch them. This may be so with the split corps, but you really need to study the conditions before buying one. Call me lazy–I’d rather own the stock, or a well structured and well backed ETF that I trust.

As for the bank outlook..

The ZEB (equal weight) bank chart shows us that the sector is struggling at the old support levels of around $26.50. Not much upside to that level, and I dont think there is fundamental impetus with interest rates so low that they will break it for a while. However, the dividends are likely safe for the foreseeable future. If you are an income investor, banks are an OK addition to a diversified portfolio. But don’t buy the Canadian banks for much in the way of gains. At least for the next while…

Sam asks for my outlook on the CDN vs USD. That question ties into Dev’s question about currency hedged ETF’s. Dev asked if one can trade back and forth between a currency hedged ETF and un-hedged (USD) ETF, is it worth doing if one perceives a rising or falling CDN.

Starting with Dev’s question – yes, swapping between such ETF’s can be a good idea if you guess right (that being the hard part!!). Obviously, technical ‘s can help, and I’ll address that in my response to Sam in a minute…The only things to keep in mind is that every buy and sell of any security involves slippage through the bid/ ask spread. Plus commissions. Plus timing (market moves during the time to sell one, wait for fill, buy other, etc). Its inefficiencies that count here. But..if you expect a move on the dollar in your favor by say 2,3,4,5 cents…it might be worth the chance.

Re the dollar, here is the chart:

The chart above shows us that the major downtrend (red trendline) for the loonie  has been broken. But wait..that happened in January of this year and it didn’t last. Will this attempt stick? Well, as noted in this blog, there are reasons it may not stick. The first thing to address is the significant resistance near 0.78. This implies that the current rally by the CDN$ (which is more driven by a decline in the USD rather than fundamental strengths on our side…) has 2-3 cents to go on the upside. From there, my call is for a failure to break 0.78.

The USD (chart below) vs world currencies is becoming oversold. The chart below is one I have posted before. My original support line at 93 is being tested. Whether that test draws down another percent or two against the USD, implications are for some relief soon. That would potentially kibosh the loonies advance, per the above chart. Perhaps my 0.78 CDN$ target and the USD oversold chart below will converge soon. We shall see.  I will say that any attempt of the loonie to approach 0.78 will inspire me to buy significant amounts of USD’s. I am inclined to believe it wont go much higher than that, and the risk might be to the downside for the loonie thereafter.  In a nutshell: short termed outlook up by 2 cents or so. Longer termed outlook for a decline in the loonie. 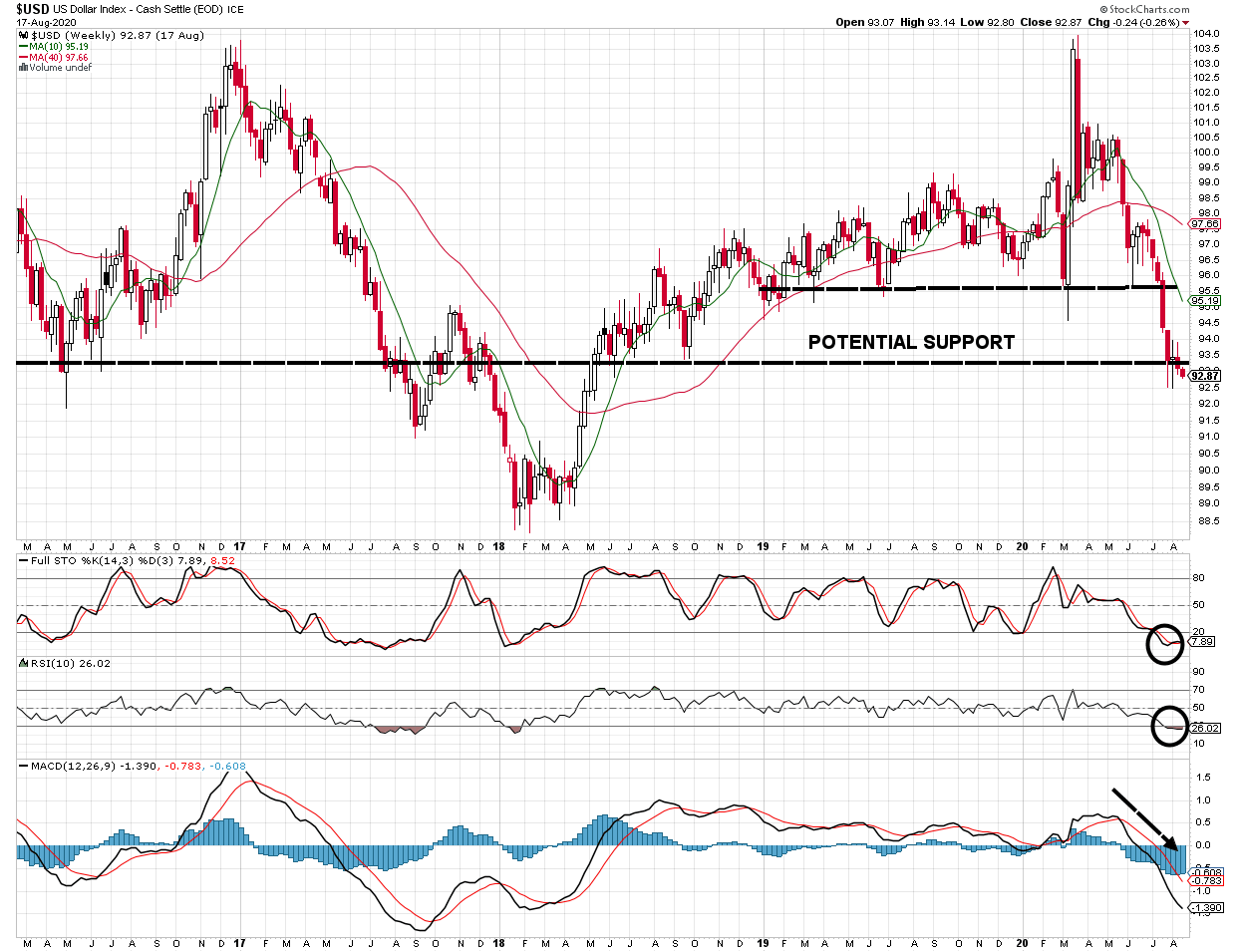 The remaining 2 questions will be answered on the next blog – probably Wednesday or Thursday of this week. I’ll cover my SPX outlook, and a technical analysis technique question. Stay tuned for Part 3 of the “Answers” blogs!