Ask me Anything Answers: Part 3 of 3

We’re into the home stretch, baby! Today’s questions are being bundled together, given that they both focused on commodities. Before going to the charts, let me again thank all question-posters for their participation. If you didn’t see your question answered on the three “Answers” blogs this week, please check for my response on last weeks “Ask me” blog. I addressed them directly in the comments section, given that they were not a “big” enough topic to cover on this weeks blogs. Lets get started:

David asks if XBM has an upside target on the Base Metals ETF XBM. Adam asks for my outlook on gold, silver, coffee, coal (which I couldn’t find a chart for on stockcharts.com), Nat gas and Oil. Between these two readers, I think we’re covering the commodities space pretty thoroughly. Nice to be able to do that on one blog! Starting with the base metals group…

XBM is the iShares TSX-listed base metals ETF. This index ETF holds the producers, not the metals themselves. You’ll be familiar with the big names in this ETF. The chart above illustrates a holding pattern between roughly $8.50 to $13.50 for the ETF. At nearly $12, its half way through the range. But, the upside to $13.50 is still probably enough to warrant consideration as a portfolio holding. David wanted to know how high this ETF could go if it breaks out. Well, there is an old adage in Technical Analysis that says the longer the base, the greater the case. Almost 10 years of sideways action gives a pretty good base to break out of. But will it….? Lets assume that the infaltion fears (which I happen to buy into) materialize. That may push all commodities, including the metals, up – and through this resistance point. If that happens, then we can use that old adage and do a measured move on the chart. That would imply massive upside that I’m too conservative to even print. But if we want a more subdued target, we can see that there is a little bit of clustering on the left side of the chart at $16. Certainly that would be realistic as a starting target upon a breakout. But keep in mind that a breakout from an 11 year base is indeed going to need some genuine reasons to happen. Inflation might be one of them. Meanwhile, it looks like a fair bet to see $13+.

Now lets go on to the other commodities. I will slam through them with briefer notes than what I did for XBM. To-the-point analysis, you might say. 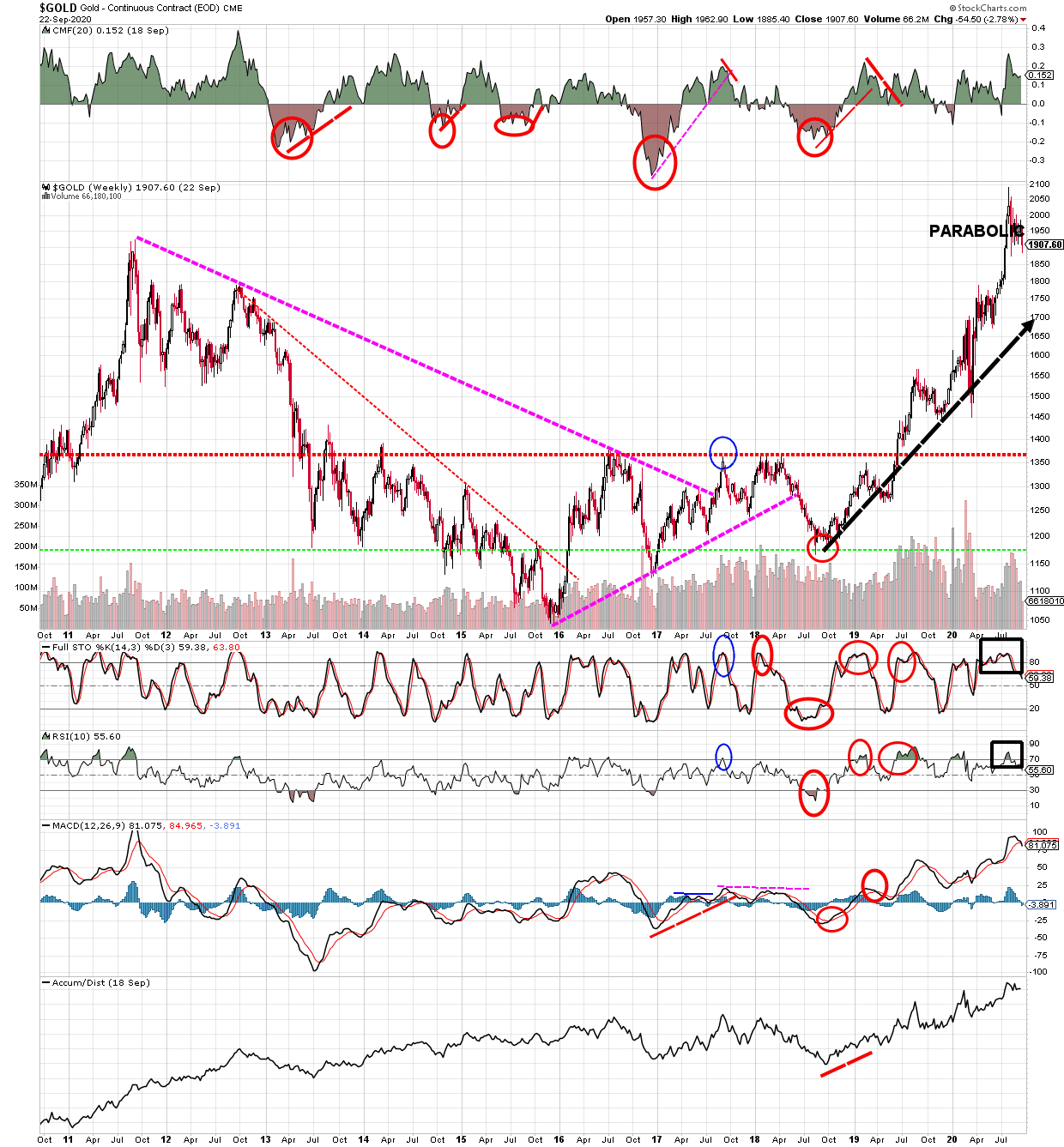 The breakout for gold through $1360 in 2019 was significant, given its inability to crack that level for the 6 prior years. It passed the 2011 highs and went parabolic this year. Clearly, it is consolidating around those levels seen in 2011-2012. Its not a concern to see this happen, given that all parabolic moves must be corrected. I’d expect more back n’ fill on this chart havering above $1800. But after a period of consolidation, I do believe there is quite a bit left in the gold move in the longer run. 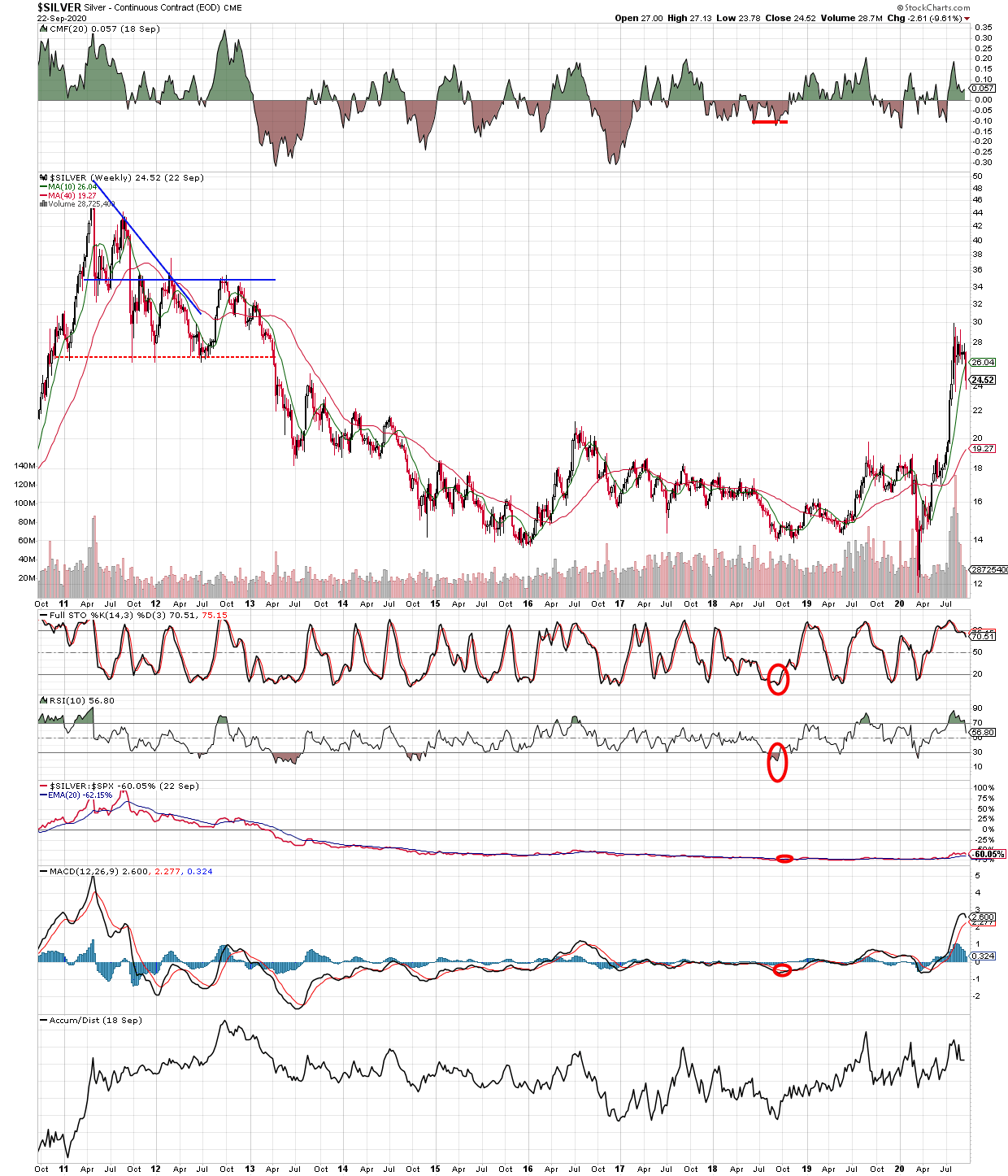 Another breakout that’s resulted in a parabolic & overbought chart. Silver found resistance near the 2011 – 2012 levels in the low $30’s. My thoughts are similar to gold – a bit more consolidation with support near $22, then back on the job with higher prices over the longer term.

Nothing better than a great cup of coffee in the morning to start your jets! The coffee chart suggests a nice trading range between $090 to $1.25. If it breaks that, away to the races – it would be like a fresh shot of caffeine! Not showing any signs of that happening yet. I’d trade the range if I was to get involved with this commodity.

Natural gas had a nice double bottom breakout, and hit its recent 2019 highs of $2.70. Perfect technical follow-through if there ever was one! Hard to say if it will break $2.70. If it does, there’s tons of noise ahead in the $3 area. At this level, I think risk is bigger than reward potential.

I covered oil on this blog about 2 weeks ago. My opinion still stands. Buy oil when it breaks out, but not until then.

Back next week with our normally scheduled programing.