Home / Ask me anything: Answers part 2

Ask me anything: Answers part 2

Once again, thanks for all of the great questions submitted form my recent Ask Me Anything blog(s). This blog covers the balance of the questions submitted. Note that if you didn’t see your question answered between this blog and the last one, I still addressed it within the comments section of that last blog. So please take a look if that’s the case.

On with the show…

Doug and Burton asked about the emerging markets, and the potential for out performance given a resurgence in oil and commodities.

To start, yes, many of the emerging market economies can do very well in rising commodity price environments. For example, Brazil is a big commodity exporter. There is a strong case that can be made for inflation. This outlook ties into the next question on hedging against inflation, but for now, lets assume you believe there’s a decent chance that low rates and the Fed’s helicopter money-dropping (all over the world, actually) will push prices up. This not only benefits commodity producing nations, it benefits economies offering cheap labor and goods. That’d be your emerging markets, folks!

Here’s the BMO Emerging Markets ETF chart. We own some of this ETF,  alongside some select individual emerging market country ETF’s. You can probably see the clear support near $17-$18 (barring the COVID crash, which overextended that zone temporarily). Resistance lies around $21. If you examine some of the individual names, you might find even better setups. We’re legging in a bit at a time to select countries, as this wont be an overnight play. But to answer the question – yes, we like the EM space, and expect to be overweight that play before next winter.

John, Burton and Mark asked questions surrounding the low (or negative) interest rates and inflation hedging, including the outlook for gold and/or silver. As noted in the quetion above, I do think there is potential for inflationary pressures in the coming year or two. Clearly, we will enter into a deflationary period for a short time, given the still-high unemployment figures, business closures and indebted consumers. But, as noted above, helicopter money and low rates will eventually result in a reversal of that deflation. The hard part will be in determining when that might come. 6 months? 1 year? 2 years? Hard to say…so, we at ValueTrend are legging into the inflation strategy a little at a time.

Gold is the classic bearish USD/ inflation hedge. So, lets look at its chart first. Its actually a pretty good chart, albeit facing some strong resistance near $1800. I’m thinking that you might see some pullback in the coming weeks. But it may just prove to break through those highs should our hypothesis of inflation prove correct.

Actually, I like the producers more, from a technical perspective…we own some iShares gold producer ETF. And we’re watching some individual names for potential entry soon….note the breakout(s) and current retest of old resistance on the chart below. This is a technically favorable setup.

Silver, on the other hand, is a little less favorable. Not to say that the producers are not worthy of consideration. But the silver chart below presents a little less upside than that of golds. The iShares silver ETF suggests $13.25 support and $17.75 resistance. That’s a nice trading range that can be exploited. But its not followed the clear breakouts that gold has – leading me to think that silver isn’t a great longer termed play. A breakout through $18 might change my mind…

Market outlook for the mid-longer term

Paula asks about my market outlook. Will the market tread water for the summer? Will the market rally in the fall per normal seasonal patterns, especially in light of a less-certain Republican win for the Oval Office?

I noted in a recent blog that the market has experienced 10 years of news headlines in the past 10 weeks. So we have to bear in mind that things really ARE different (sorry, John Templeton) right now. As such, we can look at the charts and make generalizations. But I’m going to provide a massive caveat that another news bomb, COVID resurgence, or social uprising can errupt at the drop of a hat–probably more likely than ever before. So lets say that my outlook is what it is for now, but subject to change!

I’ll start off with a non-technical opinion provided by Larry McDonald of Beartraps research. He feels that the rally we are seeing this week may be a head-fake:

The “New” Fed Corporate Bond buying facility is just an updated version of OLD news. In our view, proactive Powell doesn’t want to get ‘why did you choose BlackRock ETFs’ questions, when he’s on the Hill in front of Congress later this week.

Only change; they weren’t going be able to buy some bonds before (some push back on voluntarily transparency, Corporate stigma**).. and now they can. But, size and how much capital they deploy is still not decided.

Here’s my mid-termed SPX chart. It suggests some positive momentum studies (despite the negative Bear-o-meter reading a week ago). Note my bearish momentum observations (in black) prior to the COVID crash vs. the positive momentum studies (in green) of late. So far, the vital 200 day SMA is holding out (red line). If the market stays above that line, it can lead into sideways, or positive action. Until that line is broken, we should assume the best, but prepare for the worst – as is said. You know my plan (remaining mostly invested but still hold some cash, some gold, with some emphasis on value stocks). 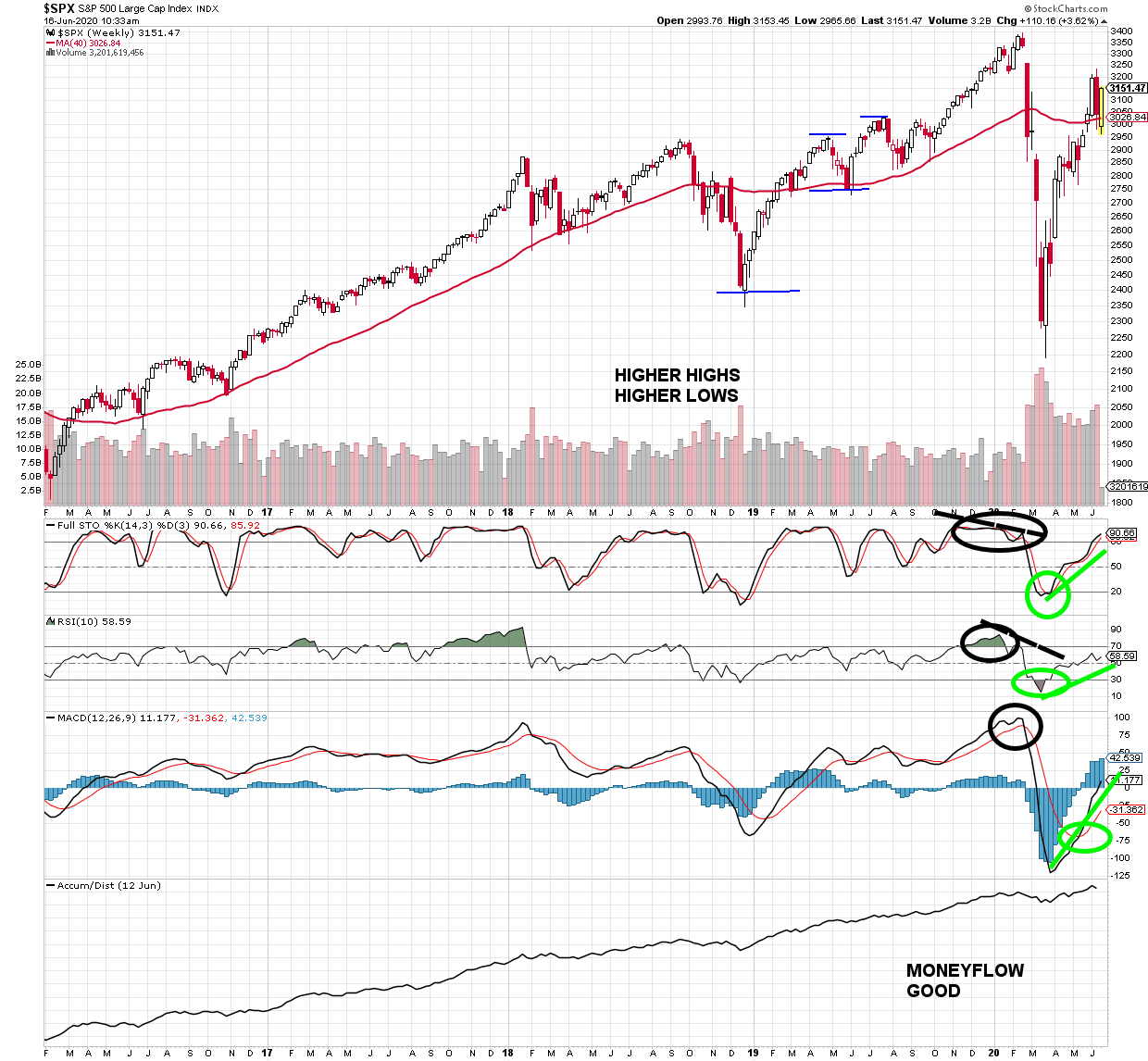 The current bull market has not reached the length that the great bull market of 1982- 1999 (17 years) reached. We’re at 11 years right now, but that falls into the range that most bull market periods last. 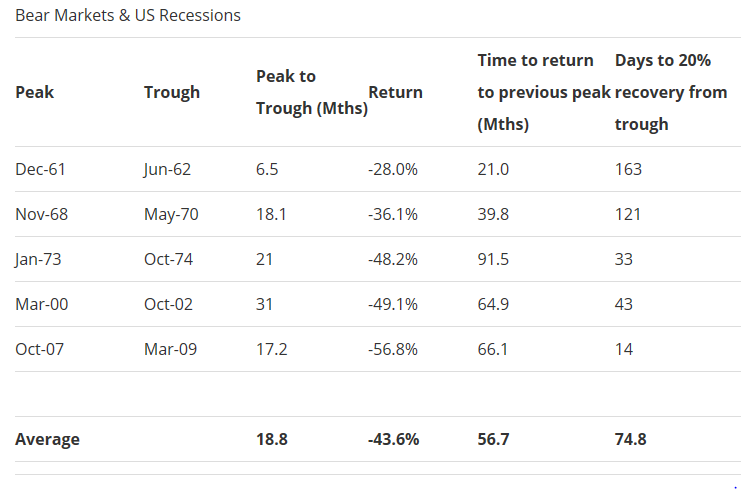 Here’s a chart that I have posted in the past. It tracks the Fed’s moves since the 2009 crash. Note that the market staged two smaller bull markets leading into the 2000 peak then the 2007 peak without fed interference (beyond monetary / rate policy). Note the big green trendline that suggests the bull may be intact…but the recent breaks (Dec. 2018, March 2020) sure did test the convictions of that trend.

I’ve used red font to indicate a less accommodating “Fed moment”. Notice what happens to the market…..it sold off!

I’ve used green and blue fonts to indicate an accommodating “Fed moment”. Plus the Trump bump (which I consider closely tied to the Fed movements, given his pressure on the Fed to stimulate since day 1). The black arrow on the right shows us the greatest Fed package of all time – aka the recent COVID bailout. Notice what happens to the market each time it gets a Fed boost….it goes up!

My question for the longer term is….what happens when the Fed stimulation ends????? History suggests it ain’t pretty.

Sentimentrader.com looked at periods with similar PE ratios as we have now. Here are their longer termed views based on historic patterns for the S&P 500:

As you can see, valuations today are MUCH higher than in 2009. This isn’t to say that stocks ca’tn surge for another 1-2 years: it certainly did from 1998-2000. But high valuations prevent a massive bull market like 2009-2020 from reoccurring.

I made note of some other fundamental valuation statistics (profit margin squeeze vs. SPX)  here and (SPX vs. PE ratio scatter gram) here.