Home / Ask me Anything: Answers Part 2

Ask me Anything: Answers Part 2 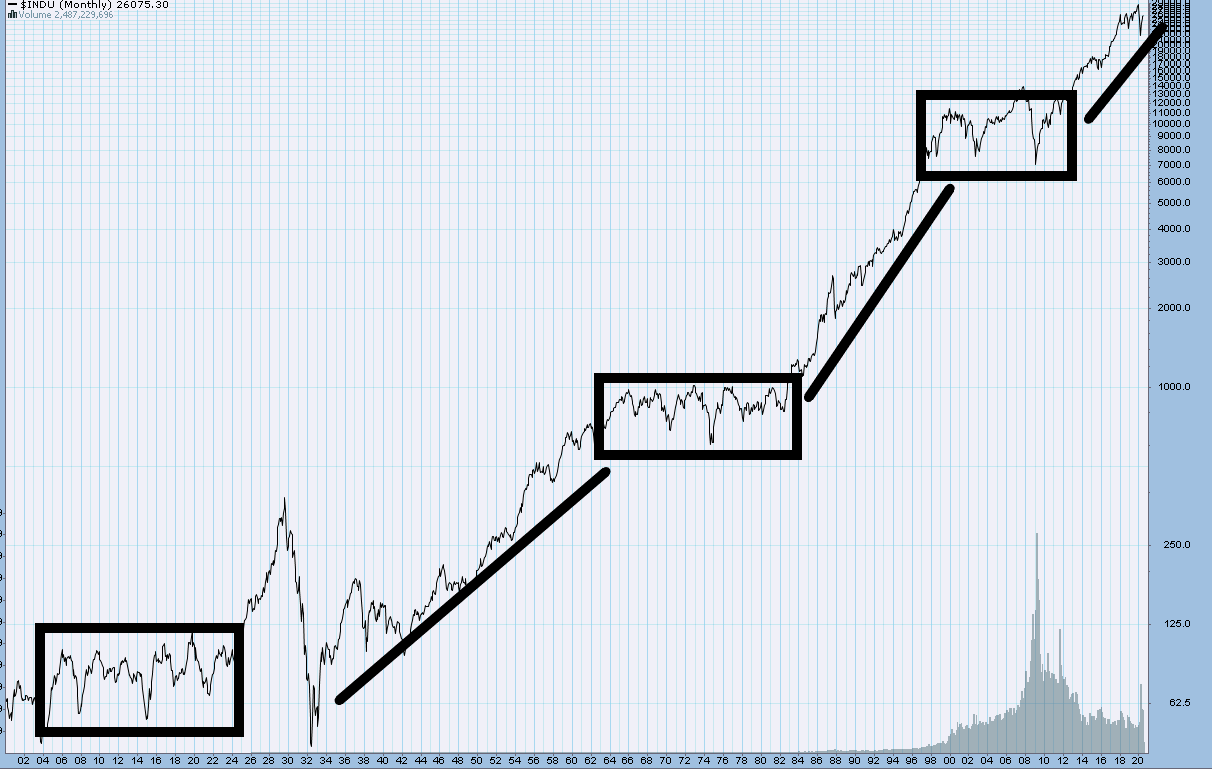 The next batch of questions involve market prognostics and sector rotation/tax loss selling victims. I’ve tied them into one general answer. This is the only question answered today, given its depth. Lets get at it…

Don asks for a 2021 projection on the markets. He wonders if the second wave of COVID/China Virus/Pandemic/ (whatever its called!) will create new economic stresses that would influence the markets in 2021.  Tied into Don’s question, Dan asks about tax loss selling in specific underperforming sectors like financials, energy, REITs, etc. Finally, Alan asks if we like oil – which is one of the tax loss selling potential victims.

Projecting out a year or more in todays market is becoming a bit of a mugs game. But I can offer some neartermed thoughts that may help with Dan’s questions on tax loss selling into the year end, and then tie those thoughts into the outlook into the coming year. This is the best my “murky” crystal ball will allow.

At this juncture, there are some very oversold sectors like REITs, financials, energy, and utilities. True enough, some of those sectors will be sold off in the coming weeks as portfolio managers attempt to offset capital gains in their tech stock sales with the losses in those sectors. Further, by selling unfavorable stocks before year end, their annual reports don’t show the ugly ducklings to their clients. This is known as “window dressing”. As an aside, ValueTrend clients hold “Individually managed accounts”, so they get to see all of their holdings online every day. Window dressing wouldn’t hide our losers! But for a fund or pension manager, hiding the dogs before the year end holdings reports come out can save a lot of face!

Another factor that may affect the markets in December will be rebalancing of portfolios. For example, balanced mutual funds and ETF’s have had tremendous gains on the stock side of their portfolios. Meanwhile, bonds have lagged in performance. A traditional balanced fund holds a 60/40 mix of stocks to bonds. If that now looks like 70/30, you will see some stock selling and bond buying in the coming weeks by these folks to keep with the mandate. Same goes for pension funds. They have mandates to contain asset classes within a certain range. If stocks go too far out of their allotted range, there will be rebalancing at the end of the year. True, all of these institutions do this quarterly in most cases. But the final quarter will be influenced by a double-whammy of tax loss selling across the board, along with institutional rebalancing.

Adding to that is the resurgence in optimism as shown on many of the sentiment indicators I follow. Take just one of them, the CBOE put/call ratio. Its at the same level as its been before several corrections. The chart below illustrates where it was prior to the 25% correction in 2011, the spring COVID crash, and it gave a very early signal in the summer that lead into the volatility this fall. Adding to that is the complacency I am seeing on several other sentiment studies that form part of the Bear-o-meter – which have moved from neutral to bearish. I’ll report on those factors next week – but suffice to say, the market is likely in for a short termed correction. We are still holding about 15% cash for this reason. We view such a movement as opportunistic -as I will discuss below.

Getting back to tax loss selling: The caveat to this potential for year end selling will by WHAT the managers and tax loss seller will actually sell. For example, I suspected oil might be a victim of tax loss selling before it began its strong rise in the past month or so. I blogged on the opportunity back in October. Well, it seems that most investors are convinced that oil is an opportunity now, so they may be less inclined to sell their holdings off in the current environment. Meanwhile, the US REIT’s in particular continue to underperform. So, yes, there may be pressure on groups like that. The chart below shows us the Vanguard US REIT ETF. The sector remains relatively contained to its consolidation pattern, despite breakouts on most other value sectors of the market.

While I can’t answer Don’s question re the economy, I can relay that the market projects a forward view on the economy usually by 6-8 months or so. Given the vaccines coming out, the market is telling us – though a resurgence in the reflation names (cyclicals, etc.) and value names (traditional economy vs. technology) – that it believes the economy will be strong in the coming year. So there’s that.

Adding to the bull case for 2021: At the very top of this blog, you will see the mega-long termed chart of the DJIA going back to 1900. I was a youngster back then, so I don’t remember much (ha-ha). Mind you, Joe Biden said he got to the Senate 180 years ago. He might remember. Anyhow, notice how the chart  illustrates the long termed sideways periods that can last 1-2 decades. I’ve enclosed these mega-consolidations with black boxes. From there, I note the bull markets with thick black trendlines. Note that these mega bull markets last decades as well. The bull coming off of the 1929 crash ended up with a 20-fold gain before it ended in the mid- 60’s. The bull that began in 1982 after that consolidation ended with a 10-fold gain coming into 1999. The ensuing sideways period lasted until 2013, but the bottom of the consolidation leading into the current bull was in 2009.

The current bull is already up 3-fold. The chart below gives us some comparable to the last bull market. If history is a guide, we have lots of room both on a percentage gain basis, and in the lifetime of this bull. This does not imply a lack of corrections like our recent COVID crash. In the last bull market, we had some pretty severe corrections – the worst of which was in 1987 (Black Monday). So it wont be a smooth ride. But history suggests it will be long and prosperous. 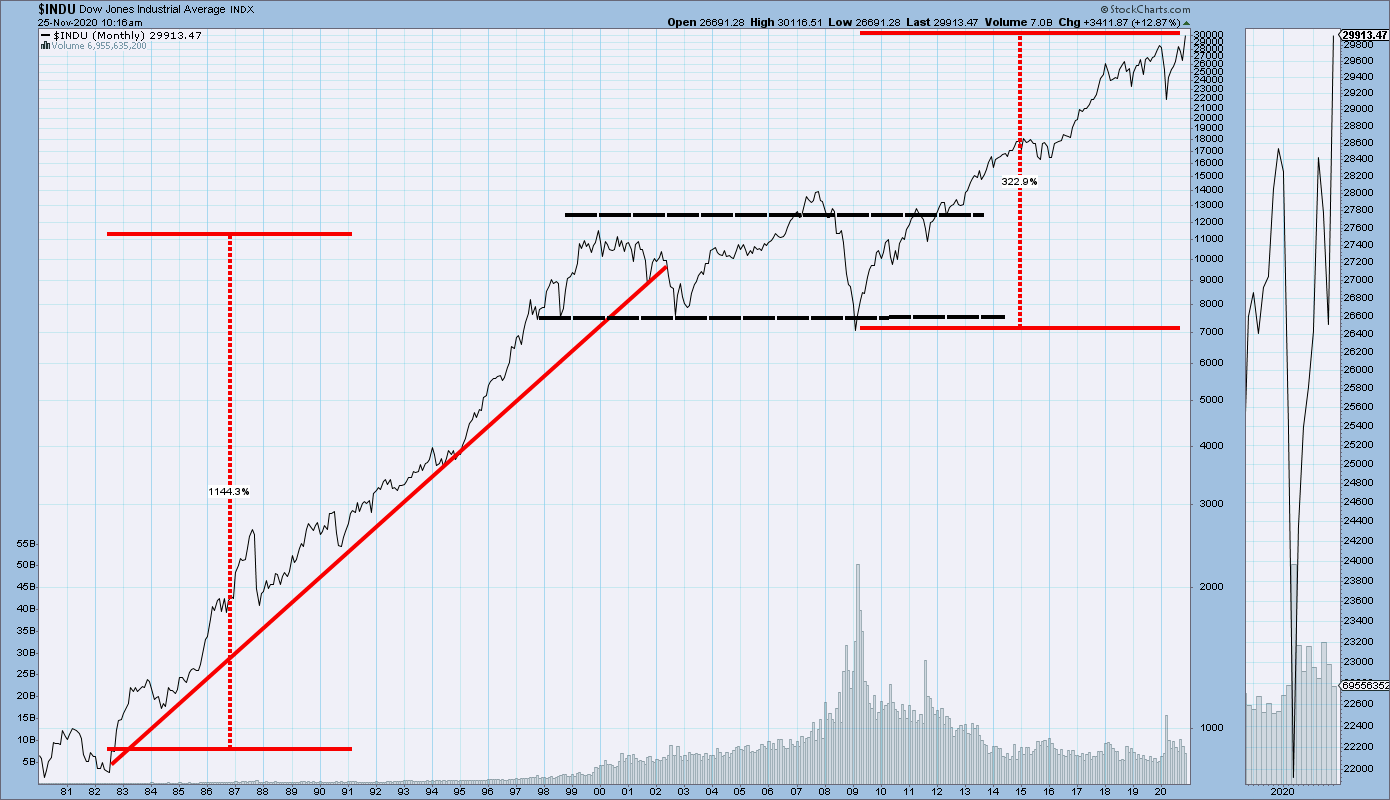 That’s it for today folks. I’ll finish up the last questions on my next “Answers” blog either Thursday or Friday. Stay tuned.