Home / Ask me Anything Answers: Part 1

Ask me Anything Answers: Part 1

Last week I posted a blog noting that readers can “Ask me Anything” so long as its not about a specific stock. As with my last ‘Ask me” blog, I am humbled by your enthusiasm. Lots of questions, and that is so nice of “y’all” to post them.

A few questions were answered right on the comment section of last weeks blog. Some questions were simple enough to cover right on the spot rather than dedicate a larger coverage on this weeks “Answers” blogs. So if you don’t see your question being answered here, check last week under the comments. Also, there were so many questions that I am spreading them over at least 2 blogs. I tend to condense the question into a  single sentence – so don’t be offended by that if you wrote a detailed question and I’ve simplified it. I’ve taken a further step by combining similar questions together when appropriate.

Finally – I’m answering them in no particular order, so don’t worry if your question was posted earlier than somebody else yet wasn’t answered today. As I mentioned – if you look at last weeks Question blog and don’t see a response by me directly below your comment – its going to be covered this week. I promise…So, lets get started!

Shawn and Dev asked about gaps. Specifically, Shawn wants to know if I find the “all gaps must be filled” theory largely correct (aka accurate enough to trade by). Shawn – I have written on this subject before. Please rad this blog, and this blog for a more comprehensive look at the gaps and their trading accuracy.

Dev noted several gaps over the past few months. The daily chart below highlights Dev’s observations and a few others I spotted since the year began. Yes, its been a pretty “emotional” year for investors, as illustrated by the numerous gaps. Note the lack of gaps prior to 2020. Gaps occur because investors are so excited (positive) that they bid prices higher than yesterday’s close right from the get-go. Or, they form when investors are so utterly fearful that they sell so despondently from the start of the trading day that they just don’t care what price they have to sell at – hence the gap between the two days.

During an aggressive downtrend like we saw between mid February and March 23rd – the down-gaps could not be expected to fill any time soon. Similarly, there was an aggressive uptrend from March 23rd to mid-June, when we witnessed a slew of  mostly gap-ups. In such cases, as I noted in the links above, you don’t always get to see the gap filled. Things are just not normal in these situations, so rules that make sense in normal times don’t apply.

But as a rule of thumb, gaps ARE typically filled so long as the broader trend is not in some type of longer lasting panic move or goofy upside euphoria as seen just after the March 23rd bottom. Typically, if a panic move (up or down) causes a gap within an otherwise orderly 45-degree angle type of trendline, you will see it filled pretty quickly (days or a couple of weeks). Hope that helps.

Is gold a stock market hedge? 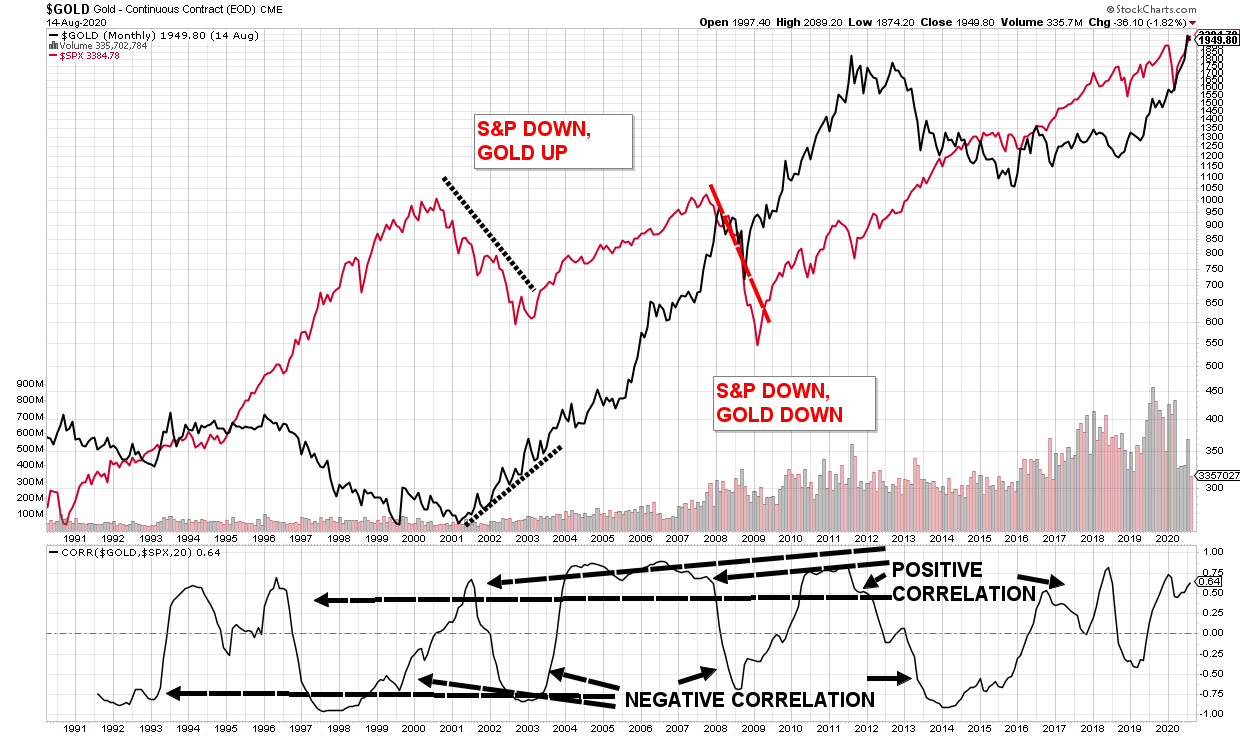 Having said all of that, I have covered gold’s tendency to be negatively correlated to the USD on many blogs in the past. Here’s my most recent coverage of that relationship.

Also – We covered gold stocks vs the broad stock market on a blog here if you are interested. They are correlated most of the time.

Brent asks if I like silver miners right now. The quick answer:  I don’t like them for a near termed trade. They are overbought and clearly rounding over after testing 2016 highs. The SIL chart below suggests that there is some pullback ahead for the sector – note the overbought momentum studies below the price chart. Having said that, any support near $0 might indicate a return and eventual blow thought the $50 highs of late. I’d say that its best to stay on the sidelines and see if it  retreats and finds support as momentum indicators calm down. Conversely, if it does manage to defy gravity and blow through the old highs of (about) $52, it might make a case for more neartermed upside. That wouldn’t be my bet at this time. But anything can happen. 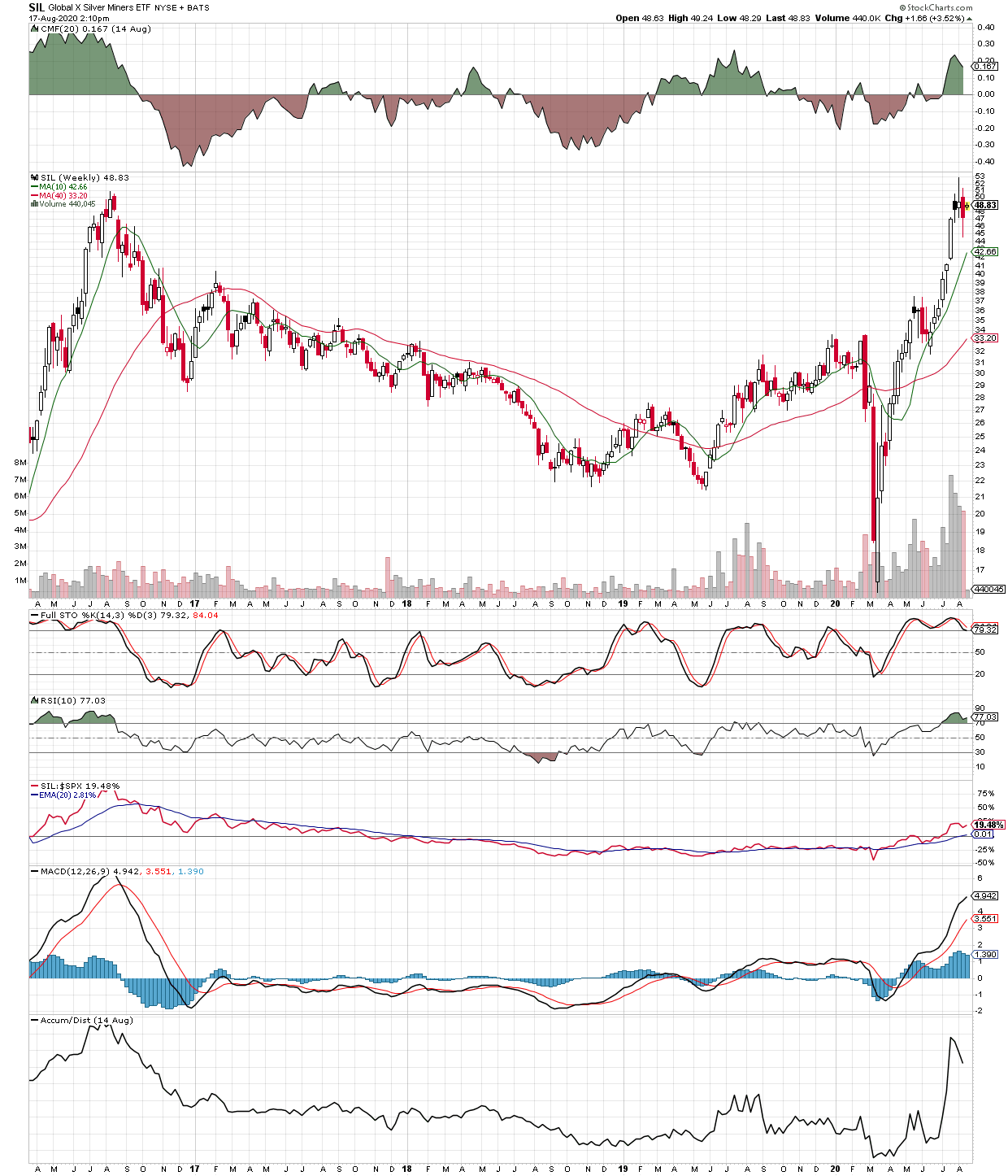 Final question of the day is from Dave – who wants my outlook on energy.

The iShares Capped Energy ETF (XEG-T) is a pretty good barometer for this sector. I’m sure that most of you are aware that energy stocks will depend on the movement of oil (largely) and gas (less). So – we shouldn’t be surprised to see a relationship between the charts. Below is the WTIC chart. I did not make annotations on it–I simply want you to take a snapshot of its “look” for comparison to the XEG ETF.

Below is the XEG chart. Yup  – kinda looks like the oil chart above, doesn’t it? Go figure. The big difference is that the producers are lagging behind the commodity. Note that WTIC above is hitting its old support levels near $42 or so. Meanwhile, XEG  on the chart below is way below its old support levels of $7.50. Mind you, XEG, being a stock index rather than a pure commodity play, can be encumbered by lagging effects that may cause energy stocks to under perform after a rough period for the commodity. Thus, it might be expected that the stocks as a group will under perform for some time as the commodity/ commodities rights itself.

Nonetheless, there is some semblance of relationship between the chart patterns. So we should watch them both. I would note that many of the technical developments of the XEG chart are encouraging. Near termed moneyflow momentum (top pane) is rising, despite the longer downtrend for cumulative moneyflow (bottom pane). Comparative relative strength to the SPX is flat now – having been negative since late 2016. That might be a good sign. Further, we have rising momentum indicators while the sector continues to build a base. It may be worth buying into the sector if XEG can break $5.50 again. It tried back in May – but failed. The technical’s have improved since that failed attempt. I’d think that a new breakout might just stick next time. 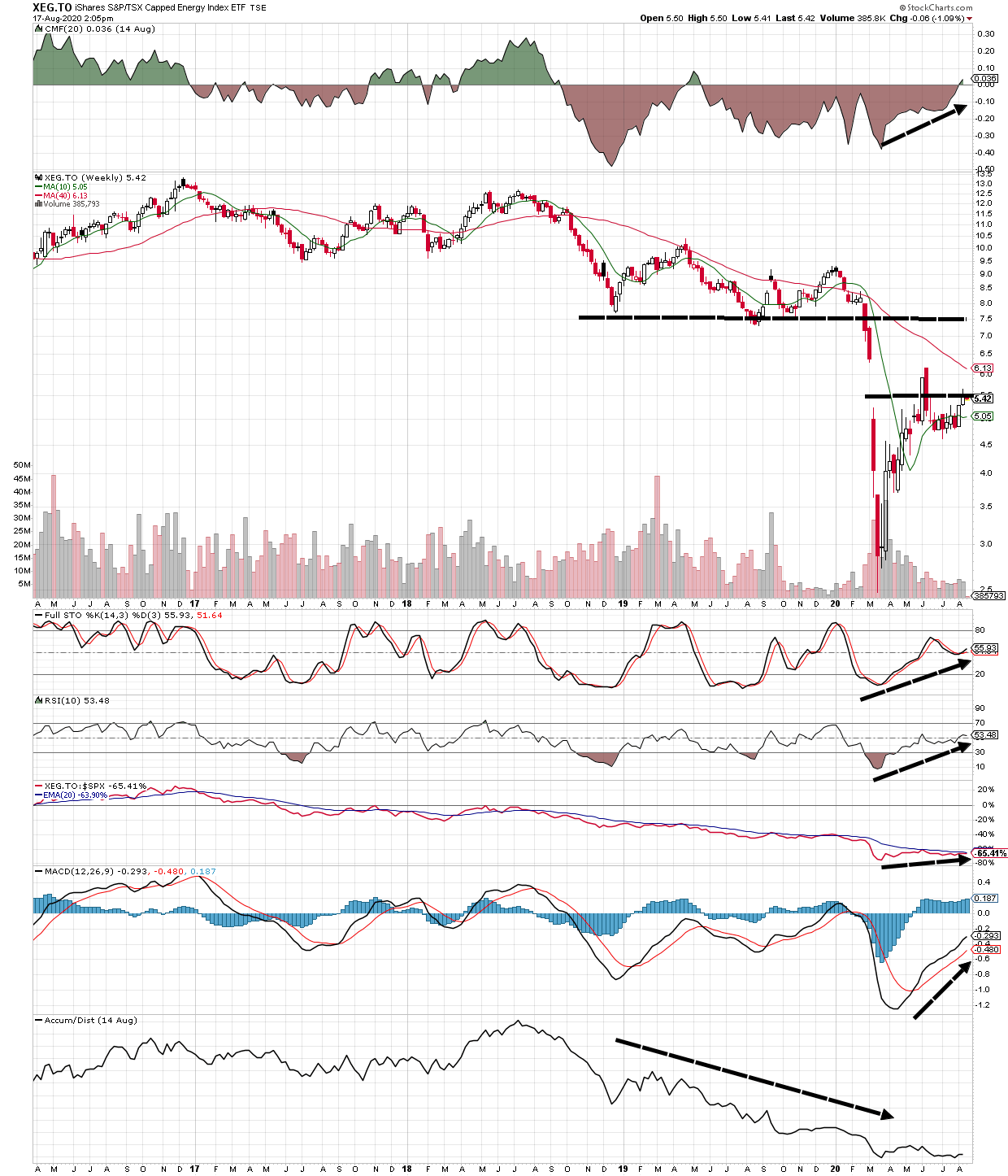 The remaining questions will be answered on the next blog – probably Wednesday of this week. Stay tuned!