Home / Ask me Anything: Answers Part 1

Ask me Anything: Answers Part 1

Whew! Well, thankyou to everyone who submitted a question on last week’s ‘Ask me” post. As always, its overwhelming, and gratifying, to see your input and questions. I answered a few questions on the initial blog’s comment section – so please check there to see if your question was covered already.

Also – due to the number of questions received, I will likely divide them over 3 blogs. This will be the first of them.

Before getting to our first batch of questions – a couple of exciting announcements:

First, I have hired a professional digital marketing agent to help bring some new material to my readers of this blog. In fact, I’m hoping this new content will expand the audience – and I continue to encourage you to recommend it to your friends and family if you find it of use. More readers = more commitment from me to produce new material. Anyhow, the new material will focus on short, to the point YouTube video’s. We are redesigning the ValueTrend webpage with a special section for these videos. And here’s the really cool thing: Going forward, I will do “Ask me Anything” blogs on a Zoom format. In this way, you can interact with me live with questions, and we will have the session recorded for those who can’t attend.

Next: I am writing a new book! A bit early to get too excited by it, as its probably not going to be out until next spring or summer. But I wanted you to know about it today.  The book will cover contrarian investing. It will cover the sentiment tools that I often talk about on this blog, along with non-traditional tools to measure investor psychology. It will also examine new tools like social media flow surrounding markets, and how to use them. This book will take the basic technical process that I describe in my last book, Sideways, and go further down the rabbit hole. Yet I’m still writing it in my usual straightforward narrative style. I know you’ll enjoy it. Gimme a few months, and you’ll hear all about it!

That aside. On with the show…

I had a few questions surrounding gold, silver, and the producers of these products, along with an agricultural play in corn. Thankyou Lance, Burton, & Steve for the submissions. I’ll cover them all here.

Here’s the gold chart. I keep a few charts of gold on my file and update them regularly. You’ll note that I circled the overbought status of the metal on this blog in August. We ended up reducing our position in the gold producers ETF XGD, buying it back later after it declined. However, that decline has continued. Doh! So, why would I continue to hold it given the fairly significant decline of late? Well, as the chart indicates by the black uptrend arrow, the trend is still there. While my chart doesn’t show it, the 200 day SMA was recently broken. That’s a bad thing. But the other rule of selling out of a trend I use is the takeout of a lower low by at least 3 bars. In this case, because its a longer termed uptrend, I use 3 weekly bars. You can see on the chart that the last low was in July, near 1850. Thats been broken, but so far only by one bar. So I’ll give it the benefit of the doubt and hold for another 2 weeks, then sell if that level isnt retraced. Thats my strategy, so take it for what it is. Supporting a rebound at current levels are the momentum indicators. Stochastics is very oversold. RSI is getting there. The only scarey one is MACD, which hasn’t come to a halt yet, and could get considerably lower. Again, I will give it until December and then re-assess. Its on the cusp of being a sell for me. 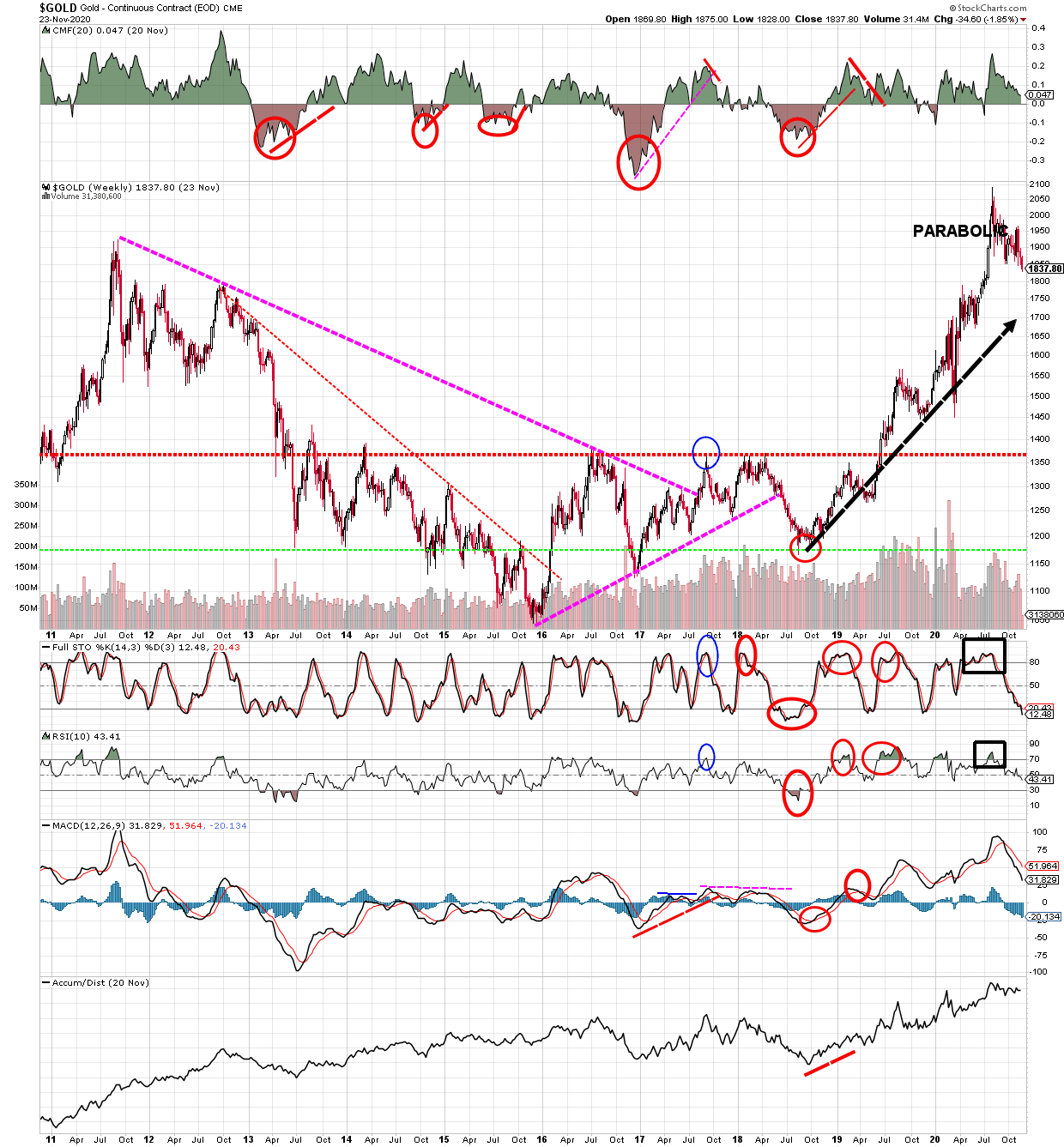 Silver looks a bit better than gold, in that it is basing and finding support after its decline. Here is the chart: 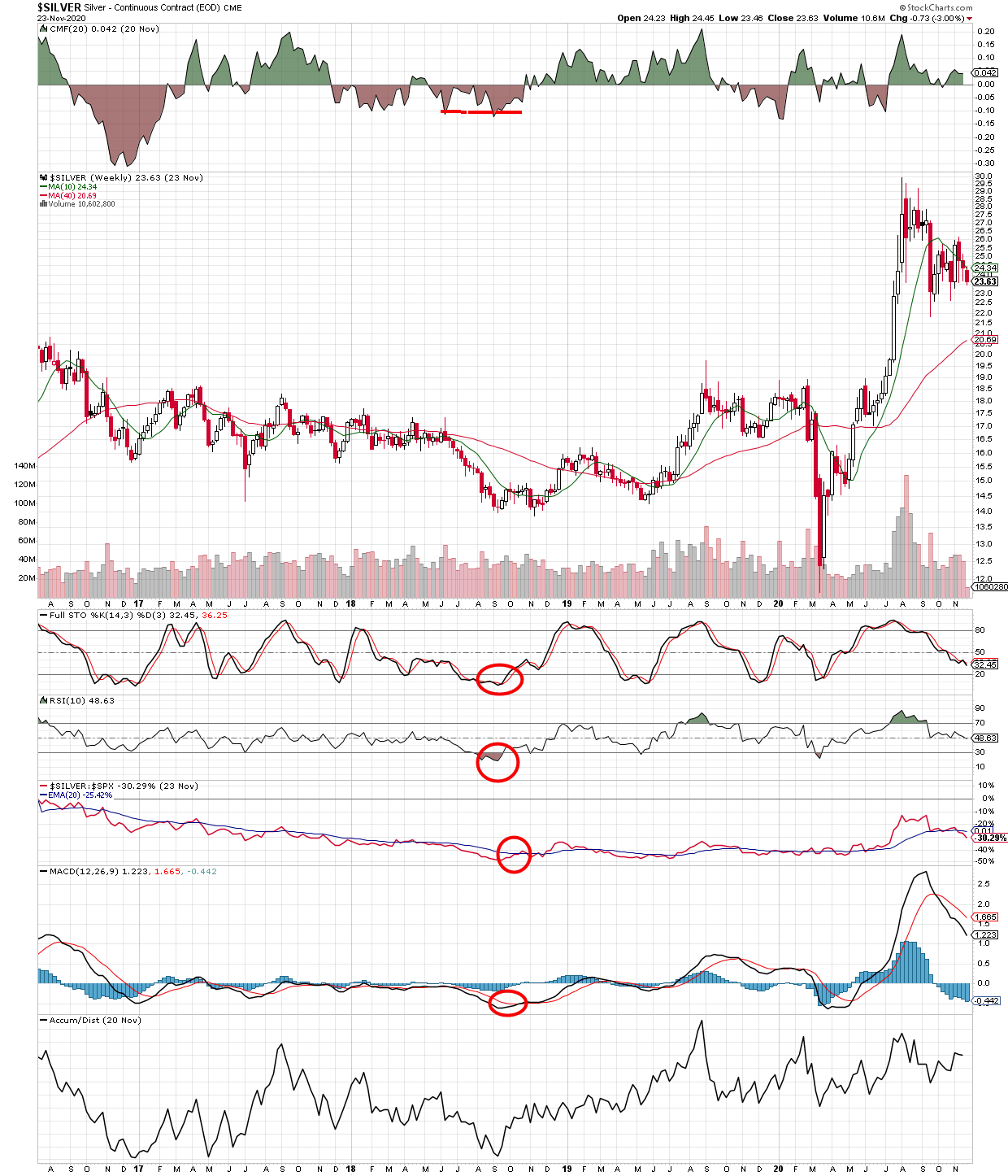 I was asked about the producers, along with the juniors. So lets look at a couple of them. First, the big XGD ETF, which we hold at ValueTrend. Note the horizontal blue line – which was the breakout test line near $19. I suspect that may hold, but a break would bring it to near $17. Again, I am reviewing this, along with the bullion break of $1850 and waiting out my 3-bar rule before selling. I’d probably buy it back (assuming a sell) near $17 if that held:

I won’t print the chart of the gold juniors per Burton’s request, because its similar to the seniors in that it is approaching a support zone. I think they will either hold, or fold together. The silver producers (Sr. and Jr.) look similar to the silver bullion chart. That is, they are consolidating without breaking support. My thoughts are that silver is a better play at this moment than gold. New money might want to avoid gold, given its toss-up between breaking support or bouncing. Silver is holding the fort, and presents a better picture. Here’s the junior’s ETF – note the support being held just above $13:

Finally, Corn – another question by Burton. In a nutshell: Nice chart! Looks like the downtrend is ending. Short termed overbought, to be sure (see the momentum studies). But MACD implies the longer termed picture is healthy. As does the downtrend break.  Note the higher high, the double bottom, the “golden cross” of the 50 day SMA through the 200. The fund is above its 200 day SMA too. Thanks for pointing this one out Burton–I am looking at it for a play – although it may decline a bit and erase its overbought status. As such, I may wait for an entry point. 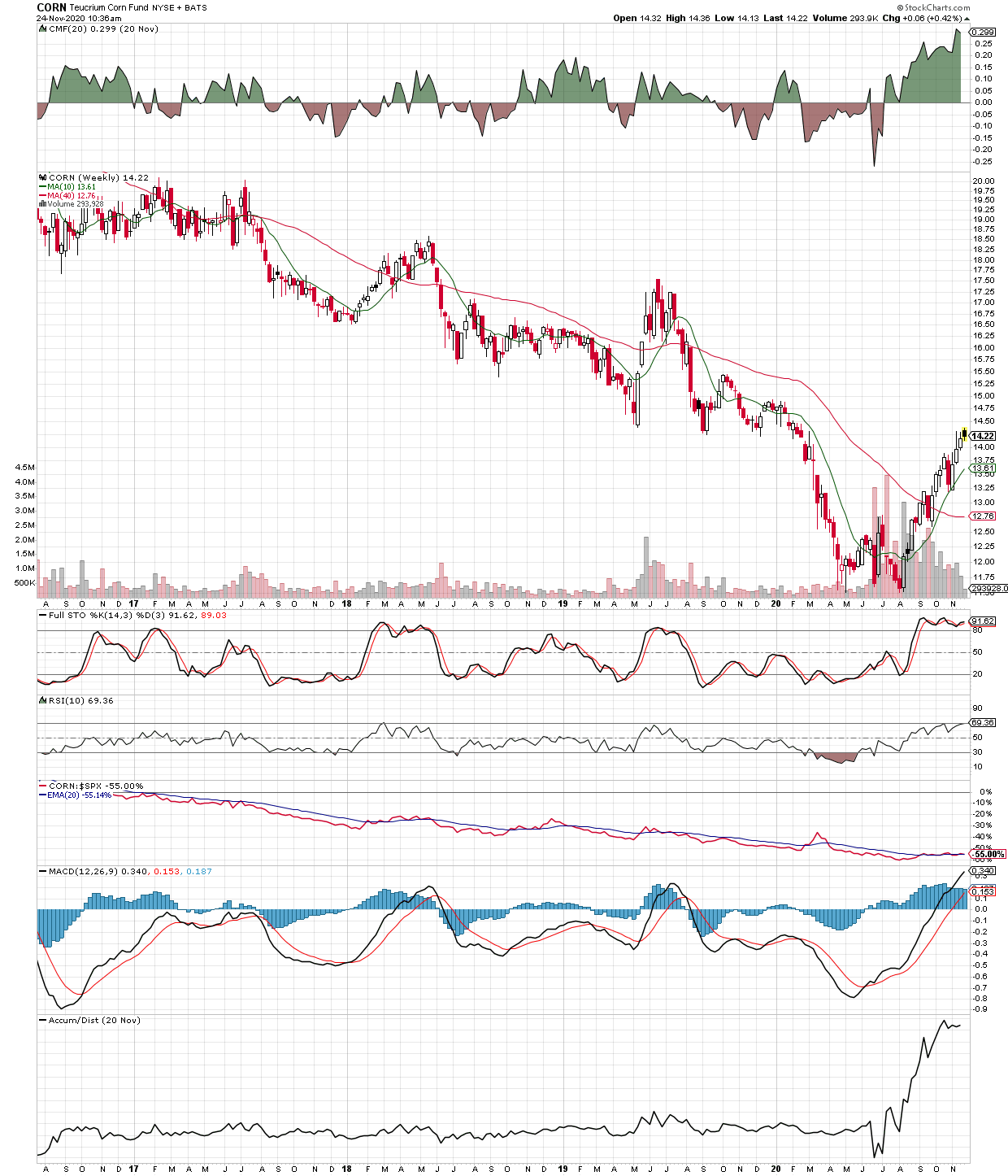 Steve and Jim both asked for my opinion on the USD/CD$ outlook. Steve asked if the Emerging Markets can be a hedge. Lets take a look at the charts:

The C$ chart, above, is coming into some very significant resistance near $0.77. vs the USD.

Meanwhile, the USD – chart below- is bouncing off of some significant support vs. the world basket of currencies. Its also displaying bullish momentum oscillators. 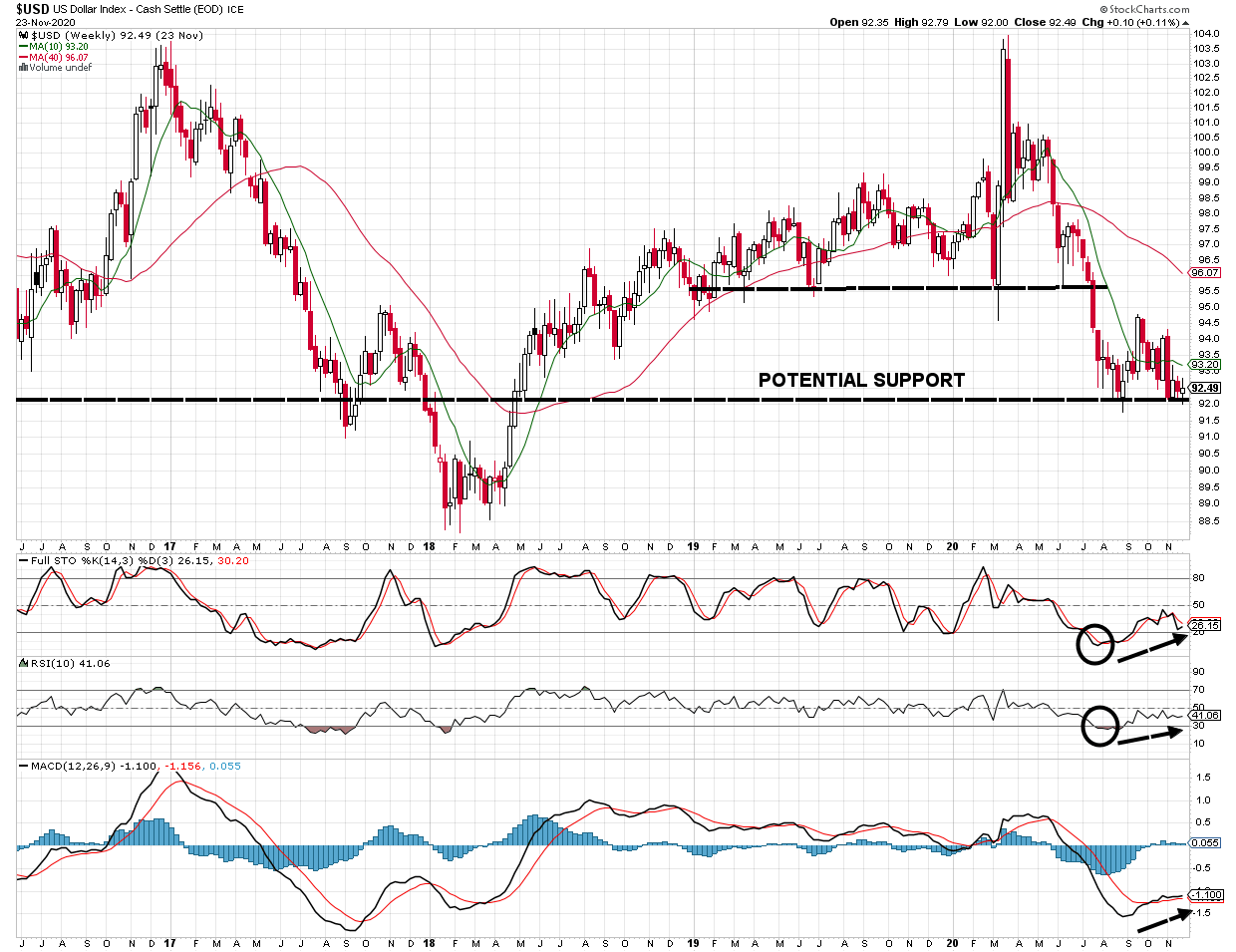 I am inclined to think that the C$ momentum might stall in another half penny or so. Especially if the USD sees a bit of technical upside in the near-term. As far as the long term goes, it will depend on the USD/world currency basket holding support near $0.92. Meanwhile, if the C$ breaks $0.77 to the upside, that would imply further strength. For now, the resistance on the C$ chart with the support on the USD chart imply greater probability to C$ weakness. But we’re seeing a potential inflection point coming if those levels crack.

Finally, to address Steve’s question re the potential hedging of USD with emerging markets equity ETF’s – here is the correlation chart: 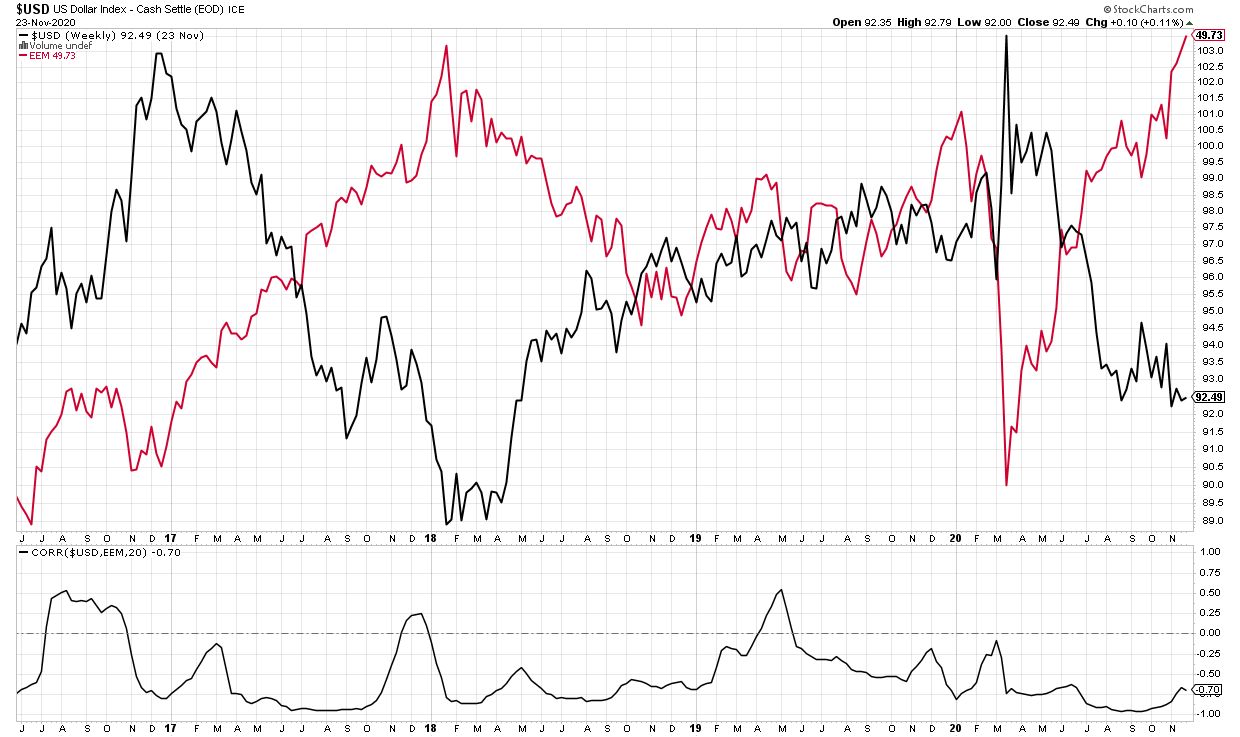 You’ll note on the chart that the USD (black line) zigs and the Emerging Markets ETF (EEM) zags pretty rhythmically. In other words, they are fairly negatively correlated. The line below the chart is a correlation study. The horizontal line is the “0” line. If the line is below this “0” line, it implies a negative correlation. Note how the relationship between these assets are indeed more often than not below the “0” line. This means that a USD hedge in an Emerging Markets ETF is probably a good idea. But we need to bear in mind that, if my assumptions re the USD being neartermed bullish, you may see a relative underperformance in EEM (or related ETF’s) until a break of support on the USD occurs.

That’s it for today folks. I’ll work my way through the questions on this blog over the coming days. Stay tuned!