Home / Ask me anything: answers!

Ask me anything: answers!

I’d like to thank the readers for sending questions for today’s blog. Wow—great response!

I’m getting the impression that there is a lot of confusion out there lately. Probably for good reason, with markets swinging around so much over the past 18 months, and the worries surrounding valuations, politics, debt and length of the bull market. Now is truly the time to act as prudently as one can. Below are my answers to readers’ questions, which will hopefully offer some thoughts on finding order in chaos! 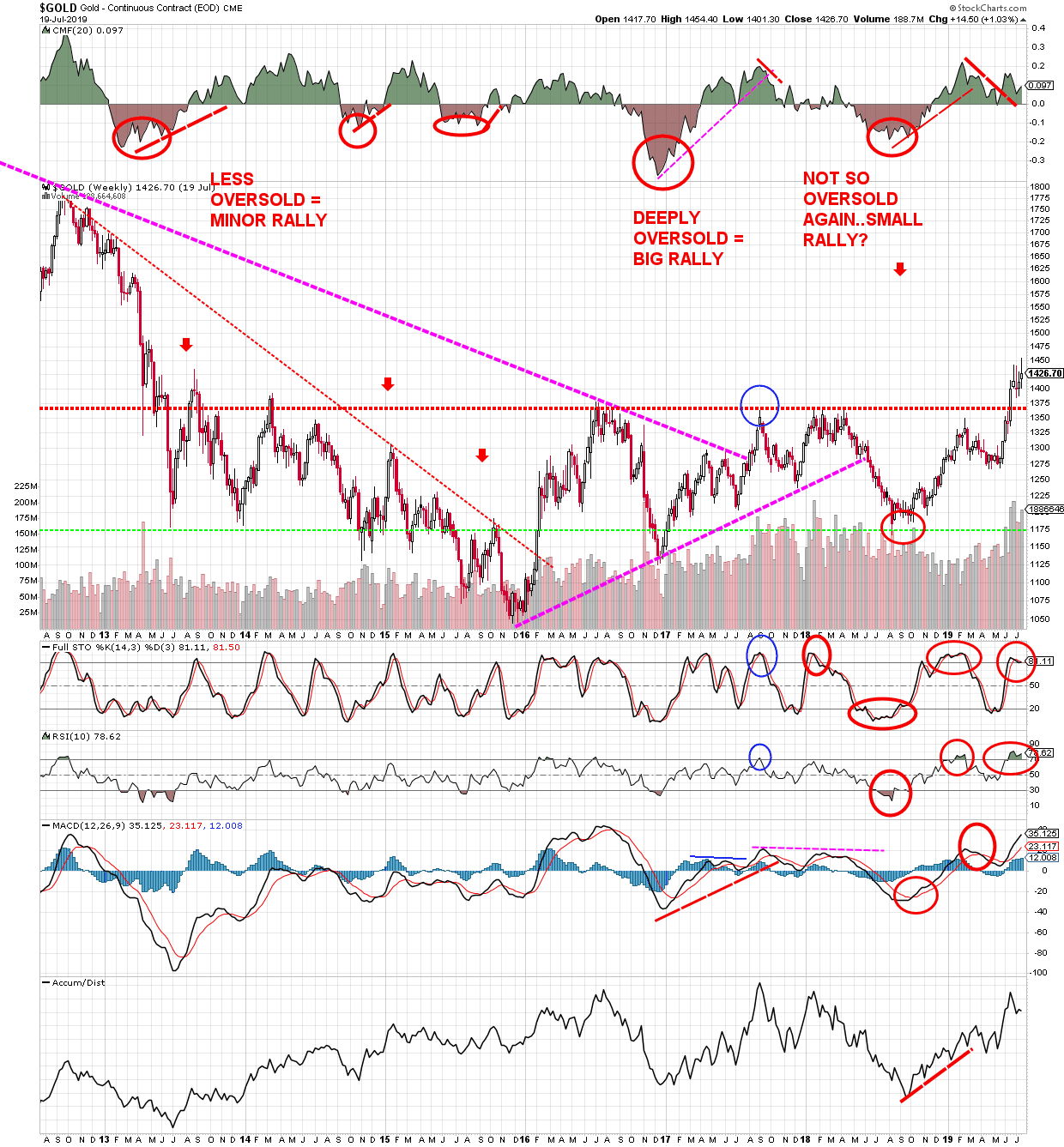 Ted, John and Many asked about gold and its outlook. I’ll condense their questions into one answer. My overall outlook for gold is bullish. But it, like silver, is pretty overbought. Note the overbought RSI and stochastics and the rounding look to the indicators on the weekly chart above. I’ve not owned gold, but I do have silver—although I did sell my silver out of the VTAGS (VT Aggressive Growth Strategy) last week. We still hold a half position of silver in the regular equity platform. I will add to it if it pulls back. I’m not in the producers yet—I’m simply interested in the commodity ETFs right now. As far as refining entry and exit points, I tend to use overbought/oversold signals from RSI, stochastics and Bollinger bands- but I use them only after looking at support /resistance on the charts. That trumps all. I will be looking to buy gold, and re-enter silver, on such a signal.

On another enquiry- Burton asked about silver – which I discussed above. 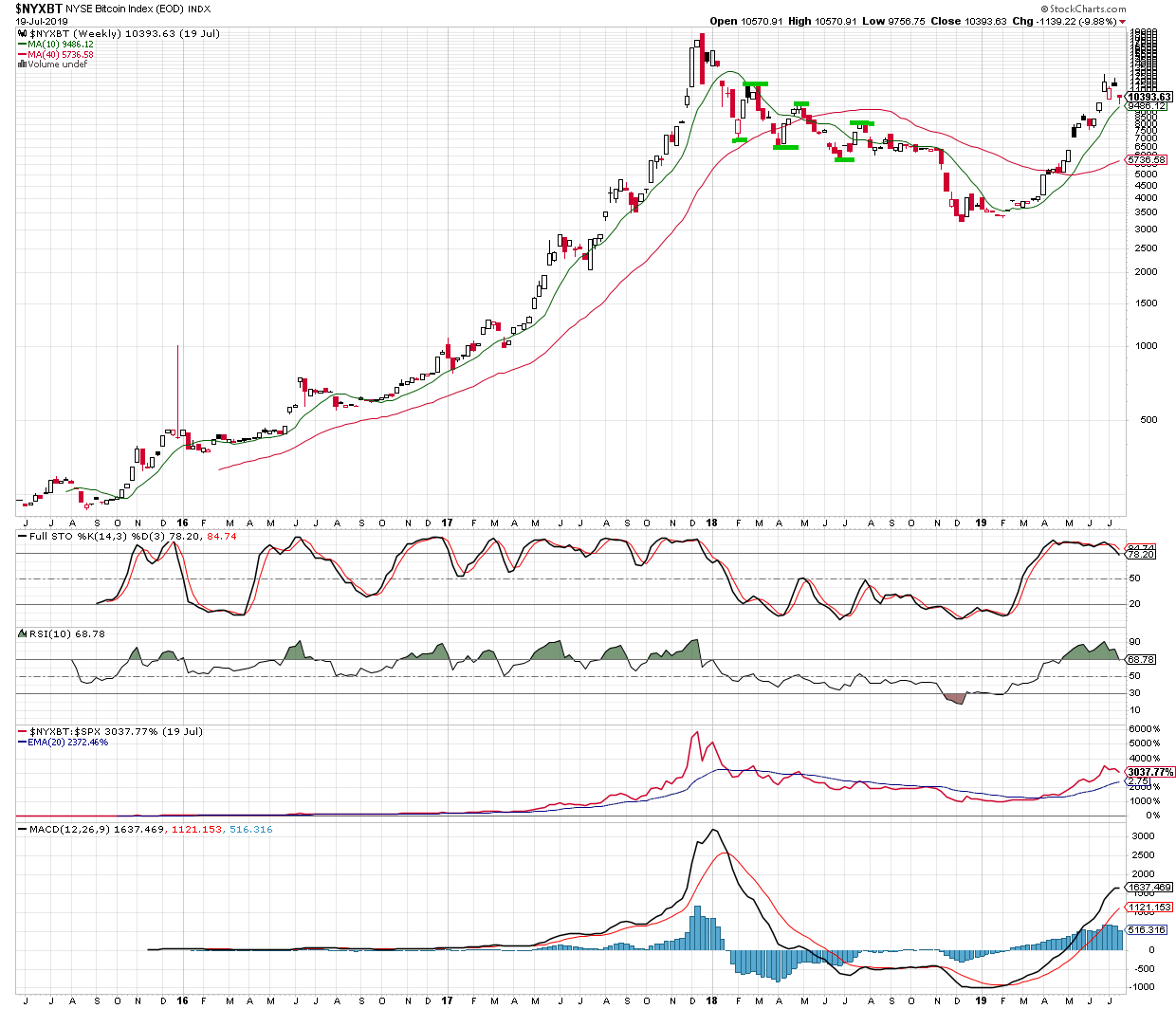 John asks about new developing sectors to buy or watch. I agree with his comments that early developing sectors like those in the crypto-coin or cannabis arenas are erratic, and difficult to get a handle on. Note how overbought bitcoin is right now (RSI, stochastics).

Cannabis is already a pretty wide-spreading product, has a fair bit of hype around it, so it is worthy of consideration for some people. These securities – like bitcoin and cannabis- are great for trading, perhaps less so for conservative investors. Using a system like my short termed timing system might be of use for them.  John also asked about 5G. Probably the best way to get involved, if you wish to avoid the Huawei situation, is through a S. Korea ETF. The SPDR version has Samsung in it as a major component—and they are big in that technology. 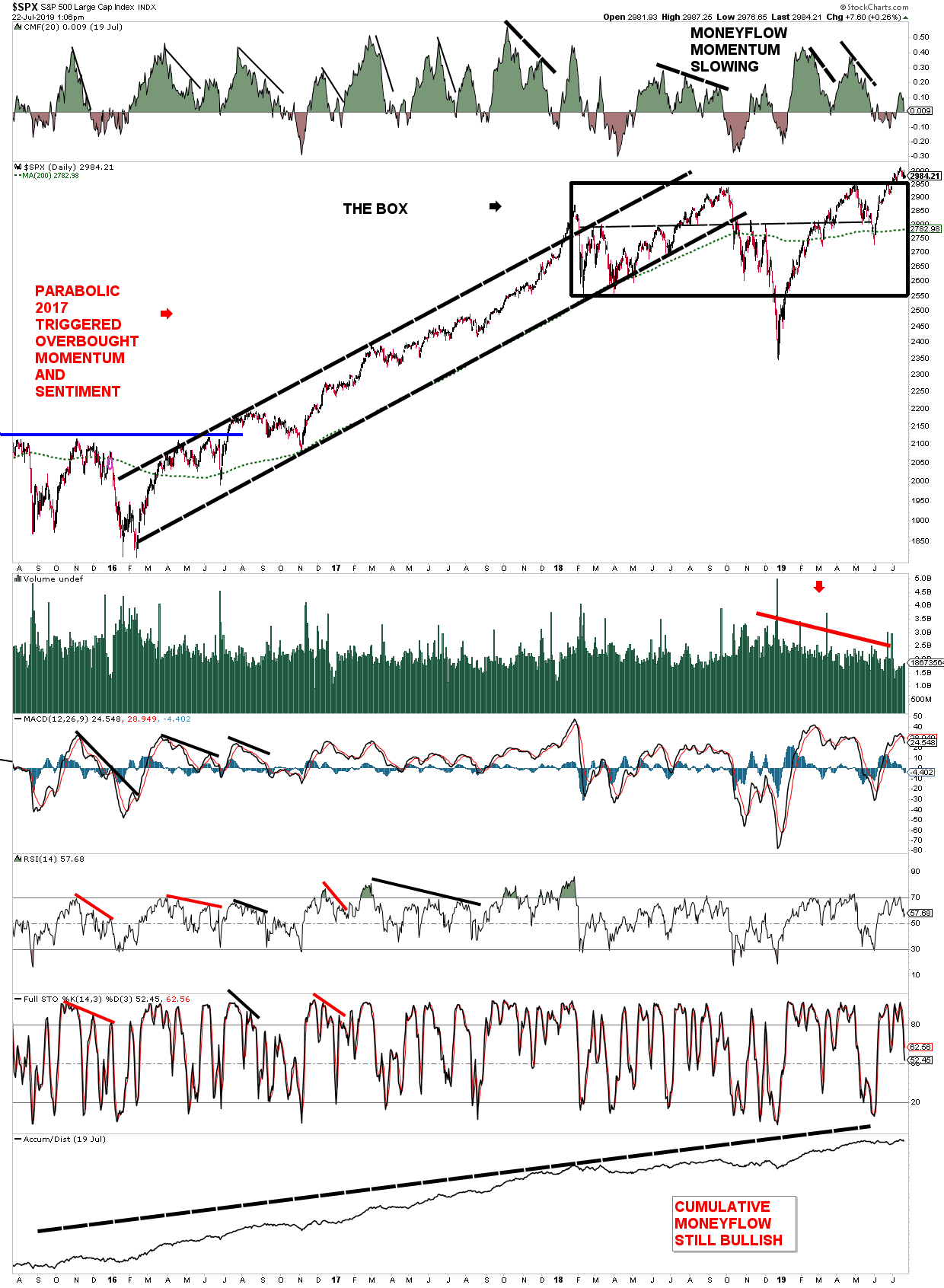 Gavin asks about investment mistakes I’ve made and how I’ve learned from them. Actually Gavin. I’m perfect. No mistakes. Honestly. Hopefully the wife doesn’t read this…

But seriously—I’ve made every mistake in the book. But I’d like to focus on one, and this is still something I have to get my head around.

Some of you know that I’ve been trading stocks for 30 years professionally, and personally for a couple of years prior to that. In 1999, I took it on the chin with some tech stocks, and I really didn’t want to make that mistake again. I learned that signs of irrationality can be identified through some indicators.  I learned to use sentiment and momentum to identify overbought/oversold conditions. I gained a bit of notoriety as being the guy who could call the pullbacks – and this was done mainly based on studies like the Put/Call ratio (sentiment), momentum (RSI, etc). Later I created my compilation known as the Bear-o-meter. This back-room data work helped me lessen the negativity of the oil crash and broad market meltdown in 2008 – and even helped in 2011 and with the oil/ gold peak identification in around that time (2011 for gold, 2014 for oil).

But…things seemed to change when Trump got elected. By 2017, I got massive signals to sell in the second half of the year- based on sentiment, momentum and all that stuff that goes into the Bear-o-meter. The signals didn’t work. Markets stayed overbought (RSI stayed over 70, VIX stayed below 12 per chart below, etc) for months on end. I pulled out, as I did in other years based on the signals. I went 40% cash in the spring of 2017.

The market continued up, and I massively underperformed. Yes, the market did eventually begin a boxed in volatile sideways period in 2018 per the above chart, proving the signals valid—but they were WAY too early! I made half of the market return because I refused to participate fully in the irrational mood of the market. The very thing that made me 2008’s hero turned me into 2017’s dog. 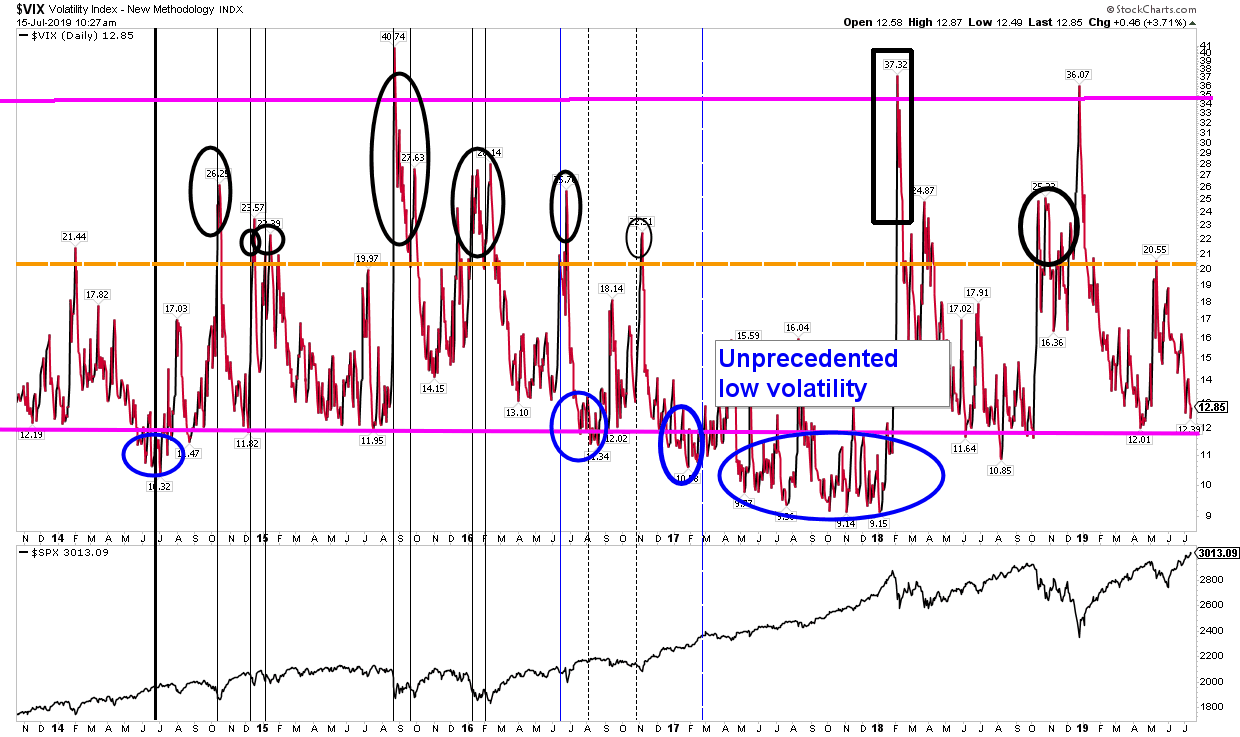 The lesson? I’ve adjusted my cash levels strategy to reflect a bit more trend analysis. If the trend is up, but the market is overextended, I will still hold cash based on those over extended signals. But, I’ll hold less cash than I would have in most of the past decade. Case in point- my recent Bear-o-meter signal is bearishly “0”, but the market broke to a new high. So I am only 16% cash. Previously, such a signal would have pushed me to hold 40% cash again. It’s a tough call, given how I really learned to trust sentiment signals to save my bacon. But, for now trend trumps all. If things change, I will adapt, at least to a sensible degree—without changing your strategy completely.. That’s probably the key lesson. Adapt, and remain flexible.

Robert asks about favorite ETF’s, and what I am looking at buying or selling going forward. The first answer is-I look at many ETF’s when trying to find the best security to cover a sector or commodity trade I am interested in. Honestly, I don’t have big favorites. But I often end up buying US iShares, SPDR’s for sectors. Commodities are all over the place – there are many providers with differing ways of tracking a commodity. I usually go for the most liquid one. I like currency hedged ETF’s sometimes, and BMO, Horizons and iShares offer them for US sectors traded on the TSX. Horizons is my go-to for inverse plays if I do one. As far as going forward—I can’t really say. I keep a watch list of every sector and currency and country I am interested in on stockcharts.com. From there, I scan them for pattern, price and signals for buys. If I own an ETF – I usually have some exit point planned based on resistance or a non-physical stop below some point of support.

Gerry asks if one should sell before or after a stock goes x-dividend. The answer is..unknown. Sometimes they fall after the x-div date- which is logical, given that buyers won’t be getting the dividend this time around if you buy after that date. However, if the stock is hot, it doesn’t matter. It will keep going.

Randy and “D” ask about preferred shares. I’d prefer (pardon the pun) to address the question of how they fit into a portfolio through my book SmartBounce. However, I can probably add a bit of input on Randy’s question, which may in turn add input to “D” on allocation. Perpetual pref’s usually have a fixed dividend. This makes them a little like a long bond. Thus, if yields rise, they are worth less, and vise-versa. A fixed then floating at a later date reverse that equation. Rising rates are good for that situation, but falling rates are bad. On top of all of this, a disadvantage to most Canadian pref’s is the low liquidity. They are hard to buy or sell. So, you should be prepared to “marry” the security if you buy one, as getting rid of it may be a challenge down the road. Again – pickup a copy of my book SmartBounce for the full story.

Armando asks my take on value vs. growth stocks in the future. Here’s the bottom line: markets go to safety at the first sign of a bear market. Watch for a rollover in tech stocks. If they fail, then we will see a rotation into “risk-off” assets, and possibly also into the value stocks. Technology, per the XLK chart below, is still leading. Until then, growth is king. Parm asked about US banks- which are growth stocks and somewhat reflective of the health of the economy. As you can see on the BMO ZUB ETF, they’ve been kind flat since last year’s decline. That could be a good thing – but they are not showing leadership yet.  Banks are flat …. but haven’t seen an absolute rollover yet. The recent sideways movements on that sector does make ya think, though!

Don asked if the current tendency for markets to react on news and events negate the value of fundamental or technical analysis. He asks if that is the case—is a buy/hold with simple rebalancing of ETF’s such as “Robo Advising” or passive rebalancing of ETF’s might be better. Finally, he asks about income strategies. I’ll cover them all here:

First – I would say that a bull market with all of its ripples will benefit a passive rebalancing strategy. After all, so long as things are going up, its all good for index returns with some sort of yearly rebalancing. However, as I note in the “mistake” question – once in a while the poop hits the fan. Robo advisors don’t compute this stuff. They wait it out with a rebalancing strategy—which can involve buying on the way down but not at the bottom. . If you are ok with a 50% drop like that of 2008/9, then a 3-year break over period – robo-advising is fine. However, that’s a long time to wait. So, you might see an active approach underperform in the good years but outperform in the bad years. The active approach may end up outperforming over a full cycle. But, more importantly, it more often outperforms from a volatility perspective. So, its really a question of your ability to deal with those big swings. And your age. If you are an older investor, you may not want a 50% drawdown and a 3 year wait to recover from it. For a pretty good explanation (if I do say myself) on when technicals matter vs. more passive strategies or minor active strategies like rebalancing, see this blog.

Regarding the income strategy question. How much an income strategy makes depends entirely on the “risk” within that platform. High dividend stocks are still stocks. If they go up, you make more. If they fall, you lose. So an income strategy that is about 50/50 stocks  to bonds will be less aggressive than one that is more weighted to dividend stocks. Our returns are, and are expected to be about 3.5%-4% on our mix after fees given our 50/50 mix. It would be higher if we were closer to a traditional income mutual fund, which usually holds a much higher dividend stock allocation. But, the trade-off is liquidity, and volatility. There is no right answer to this question of your returns, because it always comes to risk/return- which is dependent on the actual stock/bond mix.

Final question: how much capital do you need to invest with ValueTrend

John asks regarding an older investor, how much would he need to invest, what might be the right way to do so, and whether a Portfolio Manager is the way to do it. The answer is: ValueTrend accepts around $500k portfolios. An 84 year old might have an income objective.  If so, they would want to hold our income platform, which was discussed above. Or, they might just want to roll GIC’s. If they are looking to just leave it to the kids and want it to grow (assuming at least 5 years of projected life expectancy) , then equity might make sense.