I am not an Elliott Wave analyst. Sure, as part of the role of Technical Analyst, I do need to have an understanding of the concepts behind EWT. I find from a practical point of view, EWT is best used to get a feel for the market’s current stage or cycle. EWT assists me in understanding the market from a big picture, macro-view. Its less effective in determining targets  – at least for me it is. I find that the famous Fibonacci targets and retracements used by EWT purists are of little use for determining price objectives compared to viewing actual proven support/ resistance levels.

However, there are some very pragmatic aspects of EWT. In my new course on Technical Analysis, I touch on EWT and the pragmatic application of its principles. EWT suggests that the market moves in 5 main waves that make up the larger trend, followed by 3 counter waves. In between, you can get zig-zag patterns – but I tend to focus on the 5 & 3 pattern. Particularly when applied to a traditional Bull/Bear cycle.

Each of these 5 main waves and 3 counter waves (labeled A, B, C) has a behavioral aspect to them. By identifying the behavior of the crowd, we can get a feel for where we are in the market cycle. To put it in EWT language – the behavior of the crowd tells you which wave we are probably in. Below are the basic characteristics taken from two of the illustrations in my Technical Analysis course. The first shows the participation by various groups during each wave, and the second compares the smart vs. dumb money reactions during the progression of each wave: 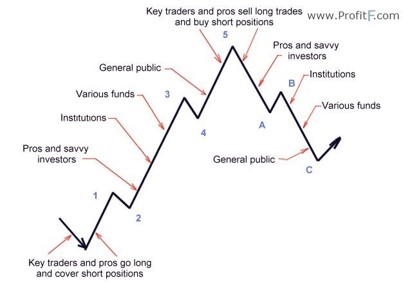 There are a few things I would like to illustrate in the current view of the market since the breakout in 2009. Please refer to the above illustration, and the notes that followed it. Then look at the chart of the SPX (monthly) below. Of note: please take this analysis for what it is. Its a thought exercise. Charts rule, and the following are more casual observations. Anyhow, on the chart below you will find:

If we have recently witnessed that final Wave 5 burst of speculation – then we should expect a decent pullback lead by smart money selling.

According to the SentimenTrader Smart/Dumb compilation, that may characterize the recent pullback. Note the trend (red arrow downtrend) after the COVID crash.  Smart money was leaving the market during their speculative frenzy. Note how the trend reversed to see Smart money buying–with strong conviction as markets got volatile starting in the fall of 2021. Note that the Smart/Dumb compilation has signaled a buy as Dumb money capitulated this week. Remember, smart money will move in and out of the market – taking advantage of capitulation and re-investing of the dumb money crowd.

I’d say there was a good chance that we just witnessed Wave A of the retracement process.  But then again, I may be wrong. The charts will tell us the truth as time progresses. I trade the charts, not my conceptualized  scenarios like this. So please take this EWT analysis for what it is. Its a thought exercise. 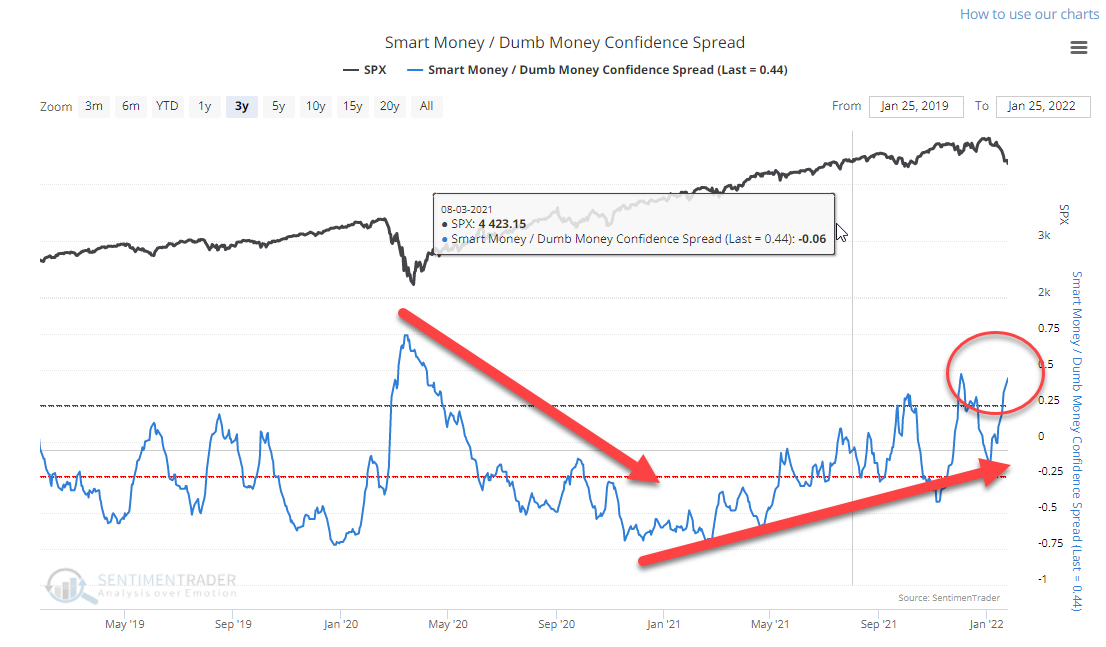 The next thing that should happen, if I am correct about the recent selloff being Wave A (and I very well may NOT be correct!) is for a counter trend move. The dip is bought, markets rally again. I bought this dip. I am playing it – following the smart money! Whatever the case, if markets retrace their loss to a maximum of their old highs – or close to them, (possible small overshoot) – this is labeled as Wave B.  See my description above. Once again the Smart money will leave the market if this happens. The indicator above will go back below the red horizontal line.

From there, we may enter into one of those “complex” EWT Zig-Zag patterns. In my world, that’s just a period of consolidation. Consolidation patterns are great ways to make money. Buy support, sell resistance. Repeat. Again, I’d encourage you to visit my Technical Analysis course to learn more about how to play that strategy.

If we don’t enter into such a Zig-Zag consolidation, then (if this scenario is correct – and it may not be!) we would simply see a final washout. That process is called Wave C. As my notes above suggest, it is where retail (Dumb) money sells in a panic. You do not want to be that guy or gal. You are smarter than that. You read this blog and took my course. You will profit by this angst – should it occur.

For now, I am playing the bump up. It may not happen. If 4300 breaks by more than 3 weeks, I will be forced to start selling (leg out).

But- lets assume Smart Money is right to be buying, and we get a bounce. We can profit by that. This might last into the spring. I usually take some profits in the spring anyhow, given seasonal tendencies. So we at ValueTrend will sell some stocks in the spring. However – If I get a bearish/risky Bear-o-meter reading at any time, I will reduce my equities. Right now, that is absolutely not the case. Quite the reverse, actually.  More importantly – If at any time, I witness a break in trend (lower than 4300 by 3 weeks, continued break of 200 day SMA) I will aggressively sell. This would imply that the Wave A decline has more to go before we see a Wave B counter-rally.

So there you have it. Armchair EWT. Take it for what it is.