Home / Are sovereign bonds about to rally?

Are sovereign bonds about to rally?

Global bond yields are remaining low after staying low during 2014. Currently, U.S. 10-year Treasury bonds yield only a little over 2%, German bunds less than 1%, and Japanese 10-year bonds less than 0.5% .

Similarly, some of the weakest markets in the world – Italy, Portugal and Spain are also at record low yield points. Even Greek bond yields remain low, despite their obvious credit risks.

Why are we seeing such low rates across the board? Almost all of the largest economies have seen their growth projections deteriorate, except the US. The International Monetary Fund’s forecast for global growth in 2015 is 3.2%, vs. 3.9% last year. Also, inflation projections (a major driver of bond yields) have come down, and may stay low due to the drop in oil prices. For this reason, central banks in Canada, the emerging markets, and the European Central Bank are likely to keep stimulating or maintaining low interest rates for the time being.

The US is the only market with significant potential for raising rates in the near term. Having said that, ACG Analytics (headed by Larry McDonald- a respected bond trader known for his accuracy and contrarian thinking) continues to believe that the Fed will not raise rates in September, and lift-off will be around December at the earliest or a later date.

Back to the technical side

When viewing the major bond index ETF’s such as the US Long Treasury (TLT), 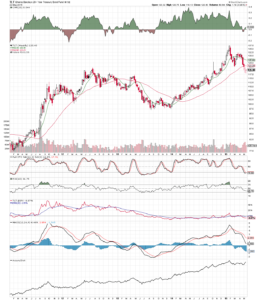 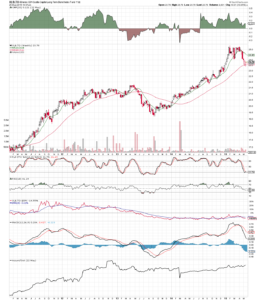 and the German Bunds (BUNL) – 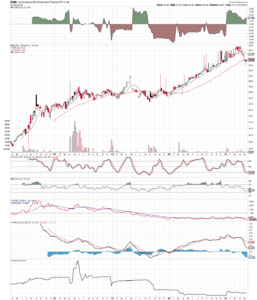 you  can see a breakdown in their longer termed trends. Click on the charts above for greater detail. Note that emerging markets bonds are not breaking down at this time, nor are junk bonds, per my prior blog on this subject. For this reason, I view the recent selloff on some of the major bond markets as signs to avoid the trade if you have a long or intermediate trading horizon. However, seasonality can be bullish for bonds at this time of the year, and the above fundamental factors may indeed push these ETF’s into a near termed rally from the current oversold conditions. Note the oversold oscillators on the charts provided. Please also note that the mid-longer termed oscillators RSI and MACD have not begun hooking up – while Stochastics in some cases are showing some signs of life.

It may be a bit early, but the world bond markets may be worth watching for a near termed rally. Wait for a hook on the indicators described before considering a trade.