I’ll start this blog off with a reference to Jason Goepfert’ s comments from his daily update to subscribers (www.sentimentrader.com).

It’s rare to see so many stocks at both new highs and new lows, which is one of the conditions for the ridiculed Hindenburg Omen. When we see many stocks at both extremes, it highlights a split market and has been considered a warning sign among market watchers for decades (see Norman Fosback’s Stock Market Logic). The S&P’s performance going forward was not good. Only once, March 2000, did it manage to skate through mostly unharmed during the next several months. That also happened to coincide with the final blow-off of the bull market, and the gains were subsequently erased and then some.”

I’ve noted in past blogs that the S&P500 (and DJIA, for that matter) has been trading range-bound. I’ve referenced a simple to follow short termed trading strategy using momentum oscillators and Bollinger Bands. This system has been, and continues to be, quite  accurate in picking peaks and troughs lately. Using the trading system, I covered the last peak and last trough in the market on my blog. Click here to read the last blog covering the last “buy” signal. 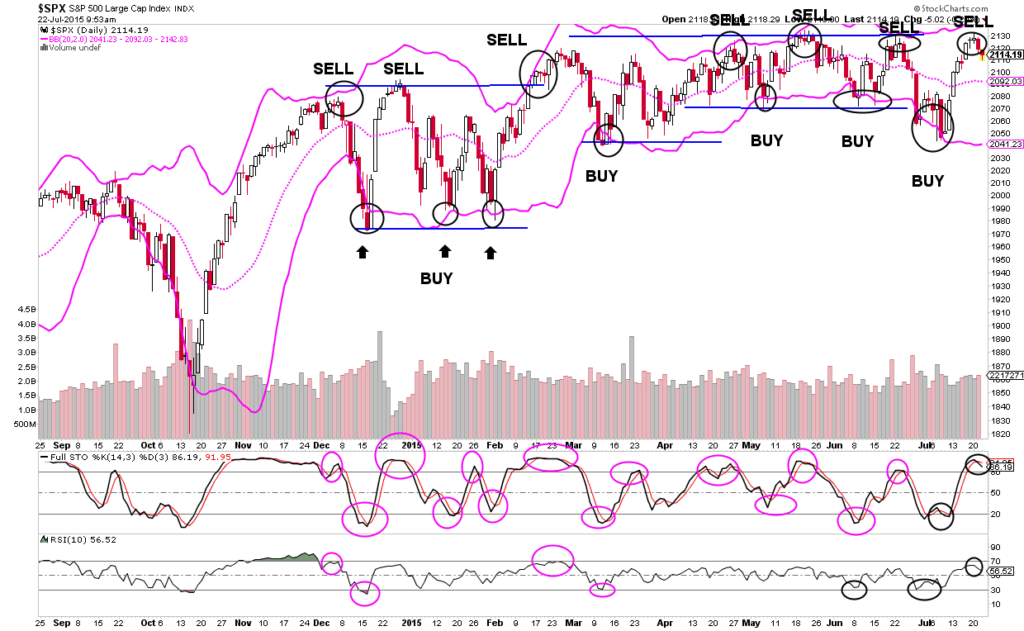 This week, the system signalled “sell”. Note that we’re also seeing expansion of the Bollinger Bands, which denotes a potential trend change—in other words, this sideways trading range may be coming to an end – and it doesn’t look like it’s going to break out to the upside!!!

In a couple of blogs in the past, I’ve referenced a Dow Divergence. My earlier blog this week covered that bearish breadth-orientated signal –here is the link.

Right now, we’re also seeing a few of the more common market breadth indicators decline –these indicators tell us the extent of rising vs. falling stocks on the broad markets. I look at lots of them, but my old standby is the Advance/Decline cumulative line. I smooth that line with a 10 day MA—as seen on the chart below, courtesy of www.freestockcharts.com. Note how the A/D line (blue line) moved sideways between May and June while the S&P500 (red line) rose. This divergence added another clue to a potential pending problem for the markets. It’s now declining. 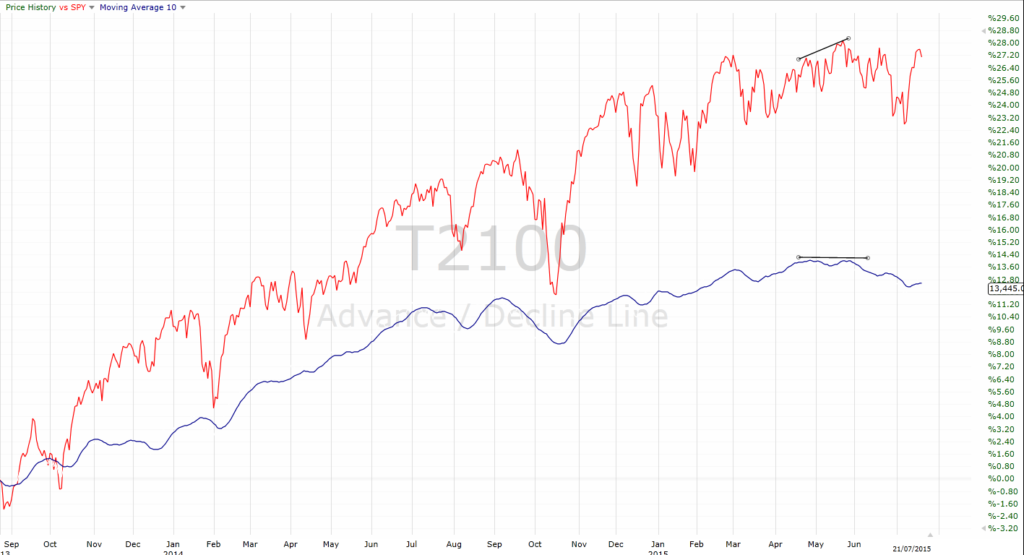 Overall, I am cautious about the near termed prospects for the markets. However, I remain convinced that a correction during this summer or fall will result in a marvellous buying opportunity within the secular bull market. At ValueTrend, we’re up to 50% cash in our equity model right now. While we expect to deploy 5-10% of that if our short termed system (above) signals a “buy”—either way, we intend to hold at least 40% cash for a few more months. You might want to consider doing the same.