Home / Another collage of insights, opinions, and ponderings

Another collage of insights, opinions, and ponderings

I’m not very confident in the complete accuracy of any analysis out there, including my own. How’s that for a confidence inspiring opening?

Fundamental indicators, for example,  do not account for a once in a hundred year pandemic. As Jason Goepfert of sentimentrader says “The outcome of this recession really boils down to a battle between pandemic (which you can’t predict) vs. government intervention. Next month we’ll see a lot of extreme economic data being released. Headlines and social media will be filled with “IT’S THE CRAZIEST SINCE XYZ YEAR!” hype. Comparisons between today vs. 1929, 2008, 1987, or other terrible years will go flying. But personally, I will shy away from making historical comparisons using fundamental data since this recession is not quite the same as other historical recessions.

On that note, let’s look at some various bits of research from people like sentimentrader, who I do think have at least an edge over most of us.

It’s interesting that markets bottomed in September 2001 after “terrorism” news flow dropped by 40 – 50%. In 2008-09, markets bottomed after “foreclosure” and “depression” news flow dropped by around 40%. Below is a chart from Bloomberg that sentimentrader posted today. If you use historic patterns on that newsflow, you can calculate that the number of news stories containing virus notations needs to drop from over 7000 (where it was about 2 weeks ago) to about 4000 stories per day  before we see a likely bottom. 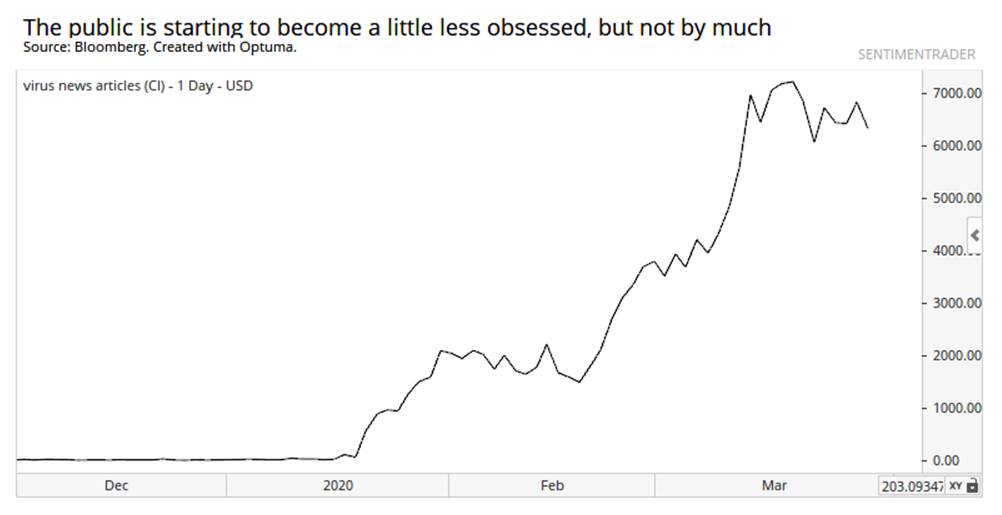 David Chapman noted in a research note for Enriched that there has only been one bear market that ended in 40 or less days. The current slide started on Feb. 12th of this year and so far has appeared to through the previous week on Monday March 23rd. Thats 40 days. If this was indeed “the bottom”, it would be an outlier. Even 2018’s selloff, which many call a “V” reversal, was not so simple. The SPX peaked in September 2018, fell 400 pts (13%) by November, rallied into early December, then fell another 250 pts to end with a 23% ultimate decline. Frankly, that crash took place within a relatively “safe” economic environment. Yet it still played out as a 2-stage decline.

Let’s look at a few charts from the past few years to spot the patterns over corrective and bear markets in less “safe” environments.

Starting with 2001, note the various markdowns, rallies, then following markdowns. This bear wasn’t a “one & done” bear. Early 2001 saw a rebound with a hammer formation that was a head fake. Another false rally took people out after the 9-11 terrorist attack in late 2001. Not until after 2 rallies, and 45% in total losses, punctuated with the July 2002 hammer, was the selloff over.

Finally, I am not an EWT (Elliott Wave Theorist). But, the 3-wave down principle probably does apply to the above charts. Feel free to draw your own and use fib numbers to help identify those turning spots. As a traditional chartist, I won’t bother trying to spot the 3 waves, but I will note that in the above examples, there were head-fakes.

For what it’s worth, perhaps, this rally since March 23rd is the “b” rally wave (head-fake) within the 3-wave sequence. That prognosis would make some sense based on the above 3 examples (the 2018 bear chart wasn’t posted). As such, we may get wave “c” final downturn as the earnings numbers begin in earnest in the second half of April. I noted that on my last blog. Or not. Remember, I don’t trust any opinion out there, including my own. As such, I remain open to all possibilities, and willing to change our plan as is needed. You should too.

A client sent me this technical analysis of the virus spread. Very interesting, and worth a look.