Home / An update on the loonie

An update on the loonie

The loonie vs. USD

As you can see on the C$ chart below, the loonie broke its 2008 support earlier this year. Despite the near termed rally on the currency vs. the USD, it’s clearly in a downtrend. Any questions? No? Thought so. Let’s move on

The USD vs. the rest of the world

Stockcharts.com provides a chart of the USD vs a basket of predominant world currencies. I’ve shown this chart, along with the loonie chart above, many times before. Nothing has changed since my last message. The USD is stalling at exactly where I suggested it would in a blog I posted more than a year ago. At this point, the USD has some minor downside pressure that could take it to 0.93 “world currency dollars”. That’s about 3 cents – or 4% below current levels.

USD weakness, no matter how temporary, does help push the CDN dollar up on a relative basis. However, we have a unique problem here in Canada. That is, our currency is pretty tied to the price of oil (aka the “petro-currency” problem). Let’s take a look.

Oil vs. the loonie

Here’s a cool chart (well, I think it’s cool. But I’m a nerd). The red line is the Canadian dollar vs. USD. The black line is WTI crude oil – priced in USD of course. The pane below shows the mathematical correlation of the two. The path of these two price charts is tracking quite positively. In particular, the price movements of the two have been near 100% correlated since November 2014 – the only exception being last March where the correlation very briefly went to neutral.  So—if you want to know how the loonie is heading, at least vs. the USD, follow oil. I recently commented on oil on this blog 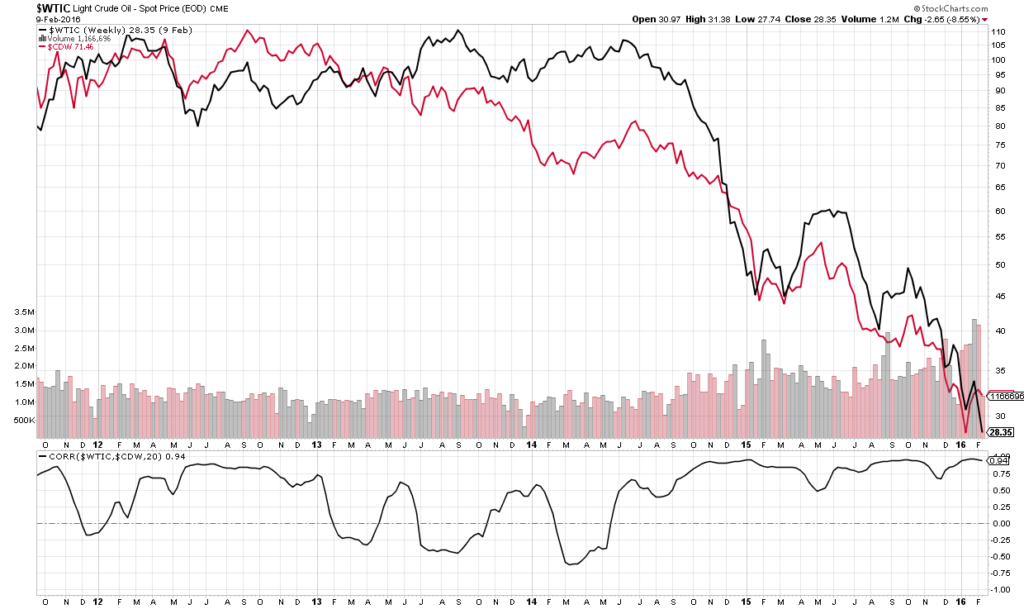 My bottom line prognosis for the loonie

The big trend for the loonie is bearish. The only potential for a rescue of its bearish path is oil at this time—and remains so until that relationship changes. Oil is basing, but hasn’t proven to break out yet. If the lows just below $28 can hold for oil, that provides further evidence for a base on oil.  The top of the potential base is $38. The loonie is going to fly if a breakout through $38/barrel occurs on WSI crude oil. If oil falls, you might expect the loonie to continue falling—if it bases, then the loonie might find some support. The USD by itself is neutral to short termed bearish, which provides some positive potential for stability in our dollar. But that by itself is not enough to support the Canadian dollar.

A quick note on the stock market

Jeff Saut at Raymond James notes that selling stampedes last at the most 30 days – and we’re 28 days into this one which suggests we might be close to reversal time. We’ll see.

Do you live or work near Oakville, Ontario?

Keith Richards is speaking in Oakville, Ontario for the Canadian Society of Technical Analysts