It’s astounding how resilient the markets have been lately–especially in light of the goings-on in Europe! Greek default potential and referendum? Piece of cake! Impending doom for Italy? No problem! China may not come to the rescue? No worries!

The S&P 500 has come close to or tested the breakout level (now support level) of 1220 after the above news events evoked panic amongst the masses. Interestingly, these panics have lasted only a day or two, and have been followed by equally wild rebounds. The chart below shows you the insane selloff and rebound patterns that have characterized the markets over the past 30 days. The continuous strength of the market to test and rebound off of support suggests to me that we are in for a solid rally over the coming months. To back the markets’ amazing resilience up, we have a neutral environment for  most sentiment indicators (bulls aren’t too bullish, bears aren’t too bearish!), neutral momentum oscillators (neither overbought or oversold), positive seasonal influences, and a reasonable number of positive earnings reports and economic indicators coming in at or better than expected. I remain short termed bullish (out to December or January) and longer termed bearish for the markets.

I was on BNN Market Call last Wednesday where I had a couple of viewers call and email about CP Rail’s prospects. I normally don’t like to blog about individual stocks, but given the significance of these positions in both institutional and retail investors holdings, I thought I’d make an exception today. I must disclose that I hold personal and client positions in CNR, and recommended it on the show as one of my top picks. Let’s take a look at the two charts to see why I like CNR over CP. As you will see on the chart below, CNR has reached a new high and is in an uptrend. Its relative strength to the markets (not shown) is positive. A bullish crossover by the 50 day MA through the 200 day MA occurred this month. It is somewhat overbought according to MACD, so it might be expected to pull back a bit, but the basics of its chart are bullish. 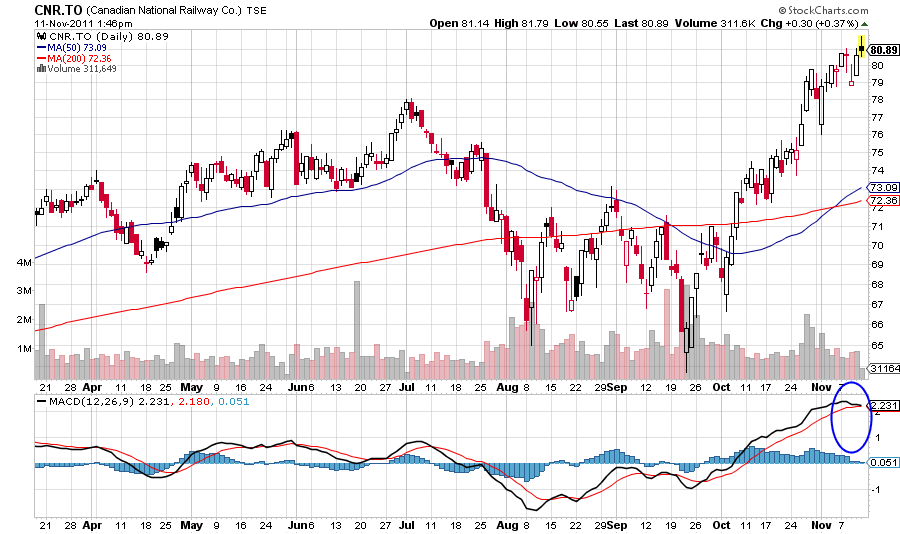 CP Rail, on the other hand, has not passed through its old highs. I’m using a weekly chart for CP to give you a better view of the overhead resistance at around $68. The moving averages haven’t crossed yet, and the stock is currently consolidating rather than moving higher in a meaningful way. CP has some upside potential to the high-$60’, but I’d rather own the one with no overhead resistance. Here’s the chart: