Home / Amateur hour is over

Amateur hour is over

My neighbor walks his dog with me sometimes. He’s a great guy, but very typical of most undisciplined investors. That is, he is long the market and gets frustrated when markets go bearish. He cries the blues and panics when losing money. Recently on a walk, he was bragging about the double digit gains he had been making in 2017. But he was nothing but complaints and moans during our walks in 2008 and 2011.

My friend has had a tendency to swap portfolio managers when he loses money in bad markets – yet instead of moving to active traders, he tends to move to other managers who follow buy/hold philosophies.  Effectively, this fellow sells low, then moves to another strategy that will ride the wave back up when the market revives.  The new manager also keep him invested during the next downturn. So my friend goes on to find the next manager during the next crash. Amateur investors tend to go in and out of markets in this way, making the “smart money /dumb money” sentiment indicator so accurate– I noted this indicator recently on this blog.

I will not take my neighbors portfolio over. I prefer to deal with less emotional investors.

With this in mind…..

Below is a longer termed chart of the S&P 500. It goes back to 1999, just before the tech bubble implosion. I note on the chart various formations, plus the larger scale policies and developments (some technical, some Federal Reserve driven, one political. Trump).

I’ve noted the bullish ones (e.g. easing and stimulation) in green font. I’ve noted the more bearish ones (e.g. the end of an easing program) in red font. You can see that such policies and developments do have an impact on market movements. Easy money helps the market, tighter rates hinder it – at least temporarily.

Right now, we are in the environment of rising rates. The market is usually OK in that environment, but not if it happens too fast. The recent talk is for a little more aggression in the Fed’s tightening. So, the markets have pulled back. Reality of the speed and impact of higher rates may be different than current perception – it may not be such a big problem for markets. But for now, the market is concerned. The tape is the tape—and I don’t argue with it.

The market has had a very easy ride of it since Trump got elected in late 2016. The so called “Trump  bump” began on hopes of favorable business tax policies etc. This a good reason to be bullish, whether you are annoyed by “The Donald’s” personality or not (I am). Business drives the economy. Help business, you help GDP grow. It shows up in the stock market—the S&P 500 has been on fire since 2009- all based on business friendly environment. It started with easy money, then transgressed into further support through Trumps’ policies. Hinder business and you hinder the economy (after all, business IS the economy). Help business, you help the economy. This ultimately reflects in the stock market.

Canada’s policies have been decidedly less accommodative to business. That’s not a political comment, it’s a fact – and it’s not helped our stock market. An article in the National Post recently explained how the two government policies (Canada vs. US) differ, and how the differences have affected their respective stock markets.

The chart below shows us that the TSX has been flat since 2009, while the SPX broke out in 2013 and has been on fire since. The chart shows a horrible scale so its not the best chart I have posted, but you can still see the drastic difference between the markets. TSX 300 is red, S&P 500 is black. The bottom pane is a correlation line. You can see the wild swings on that line. Our markets do NOT necessarily move in tandem with the US markets in any given moment. 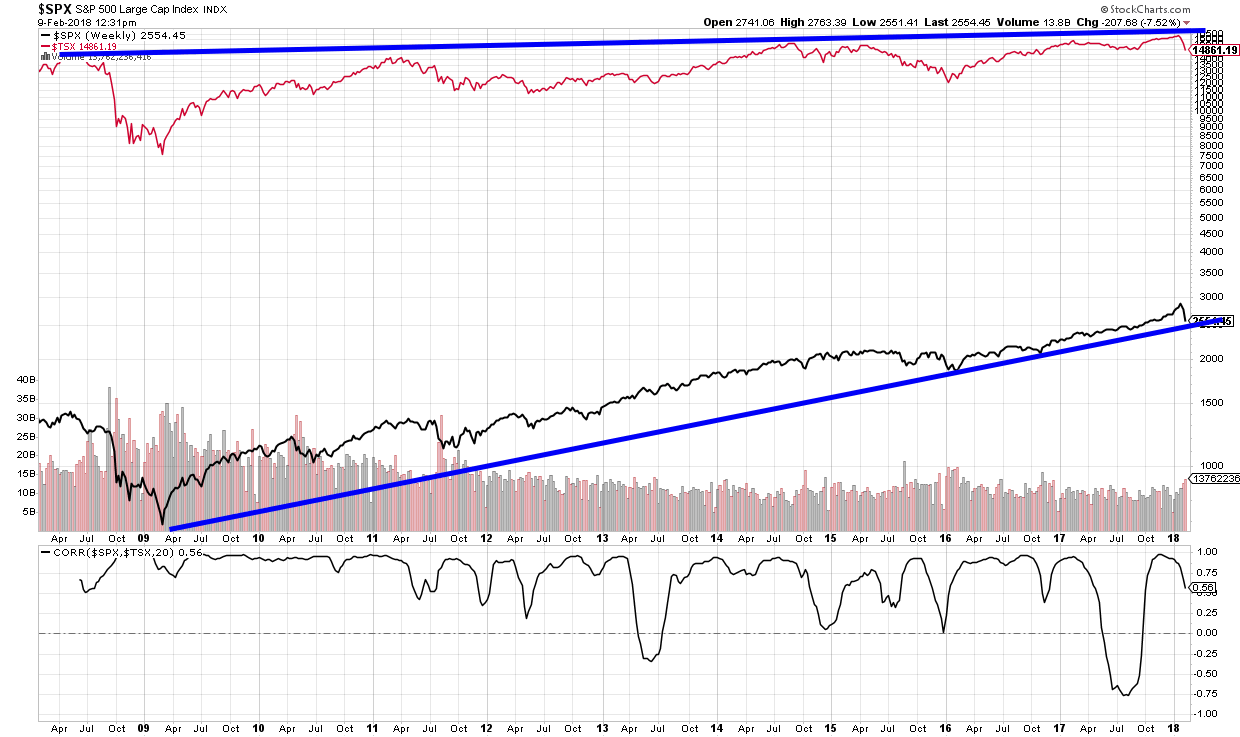 With the above thought in mind, I come back to a few facts as to why I feel that the US market will be back on track after this very needed correction finishes.

That happens to be where the 200 day SMA (black line on chart below) lies at this moment. We need only a hook from the oversold RSI and stochastics indicators at the bottom of the chart to signal a buy. And that can happen any time now. The chart below gives you some insight on where we are given those parameters. This chart shows the signals (circled) I used to predict the current selloff on this blog

The setup is approaching for a new buy signal. 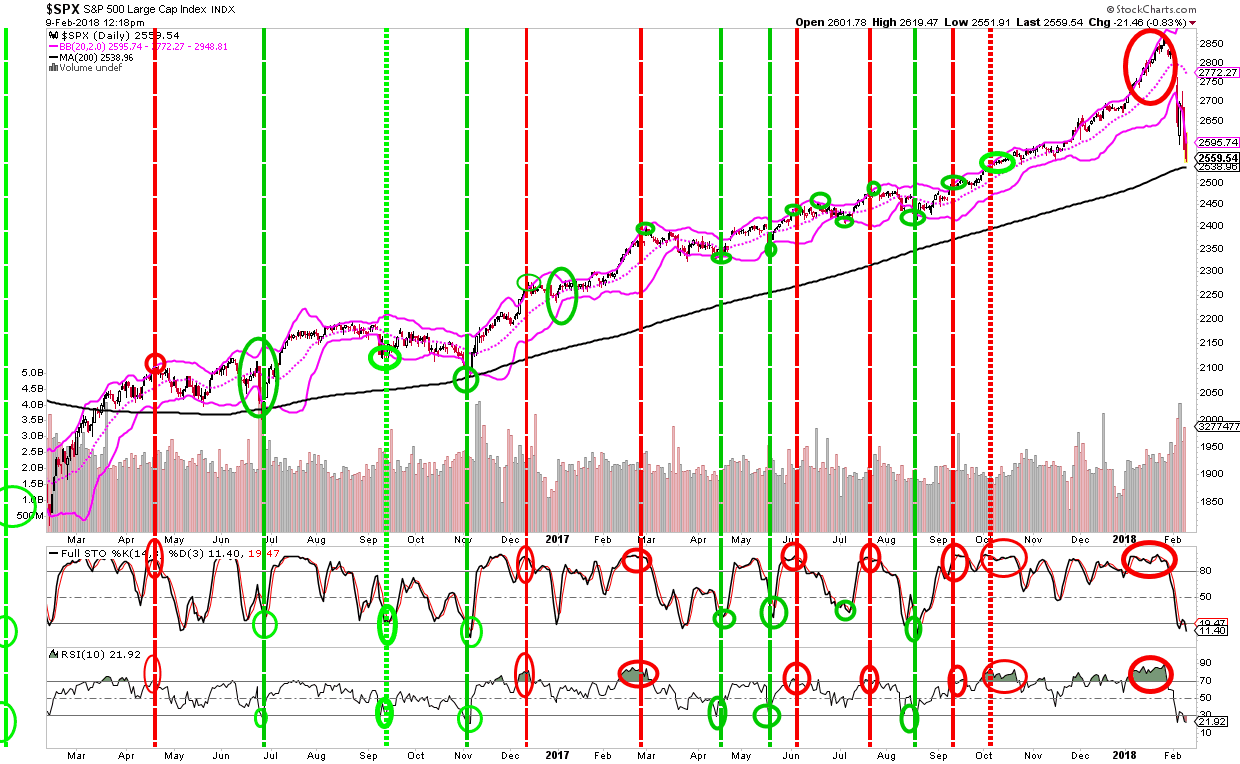 Let the amateurs panic. You and I are going to use this market correction as an opportunity to prosper from their emotions. I’ve already started legging in on very specific stocks at very specific prices with about 1/3rd of my cash. Further volatility will mean more opportunities.