The scouts have a motto: “Be prepared”. I try to ascribed to this philosophy – originally brought to the Boy Scouts in 1907 by Baden Powell.

As this blog is written, North American markets are selling off. We don’t know how deep the correction will go. I will only say that: I was prepared, and so were you if you have watched my BNN shows or followed this blog!  To reiterate my message: the excess moves of last year needed to be washed out by either a 10-20% correction – or a period of sideways volatility.

That era of correction/volatility began early this year (after the January highs).  ValueTrend moved into more than 20% cash in the spring. If you read my Bear-o-meter blog last week (Oct. 3rd), you know that I got a drastically bearish signal that day. The next day, markets began what has, so far, been about a 6.5% drawdown. Normally, the Bear-o- meter doesn’t signal moves that quickly, But, conditions were likely in place for the weeks preceding that signal, so I’ll take it for what it is. I’ll talk a little about that below. To reiterate why cash is king at times like this:

The ValueTrend Equity Platform will take advantage of this volatility in the most prudent manner possible. These are the moments that illustrate the value of Technical Analysis.

A brief look at the S&P

Since the trough from the last bull market in 2009, we have seen four counter-trend corrections greater than 10% in depth. Of those incidents, two were deep and long enough to keep the market below the 200 day SMA for about 3 months or more.

Bull markets, as I have noted in the past, typically last 7-17 years FROM THE BREAKOUT POINT (i.e. the old highs). The recent breakout point to start our count for the current bull was 2013. Thus, we are 5 years into the bull –less than the historic length for most bulls.

Each bull market ends with a parabolic move surrounding speculative markets. Last year’s move was  parabolic. But…it wasn’t led by lousy stocks. Yes, the FANG’s were moving like crazy –I mean, Amazon is great, but…is it THAT great….? Nonetheless, the FANGS are real companies with real earnings and real business models. They are overbought, arguably overvalued, overhyped. They need to correct, and the bond market trigger discussed on this blog might be the excuse for the current selloff on these (and other) stocks. But history shows us that stock market bears typically lag a bond bear. Here’s a link to my observations on that.

Moreover… big, bad, horrid bear markets are brought on by rampant stupidity via purchasing stocks with no earnings (the 1999 tech bubble), or severe stupidity in thematic investing and leverage (the 2007 subprime and oil bubble) or massively over extended stock valuations in can’t go wrong stocks like the “Nifty Fifty” stocks. FYI–these were the stocks that went wild, and proceeded the sideways/ multi-bear market period of the 1970’s. None of those conditions exist at this time.

So…how low can it go?

Well, if we are to believe that we have a few more years of the bull market before the real bear begins, and if we see corrective periods similar to the 4 noted on the chart above… I will suggest that we may see a correction that does not exceed 20% (or not by much). The market will dictate whether you should sell more than cash reserves you may already hold by a break of the SMA and a break of the last low on the weekly chart (mid 2500’s on the S&P 500). A drawdown from the (approx..) high of 2950 to the (approx.) last trough on the weekly chart of 2550 would be about 14%. I won’t call if that is to happen. But that is a reasonable first level of support, should the current break of the 40 week (200 day) SMA last much longer.

Meanwhile, my neartermed timing system is setting up for a buy signal—although we need to see the indicators hook up before calling it. 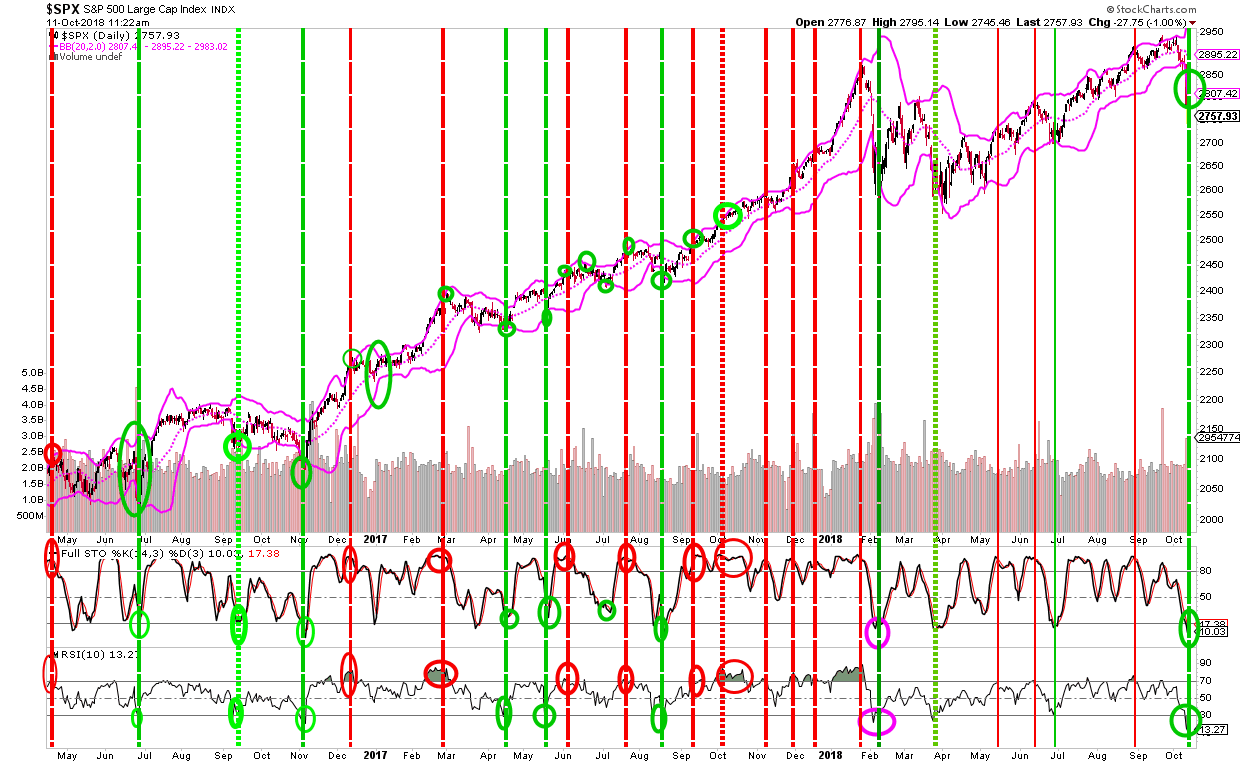