Home / A heads up on the budget, and a rant

A heads up on the budget, and a rant

Canada is # 55 in worldwide statistics for population of  fully vaccinated citizens. At less than 2% vaccinated – we are rated as “below the world average” according to the latest data from John Hopkins University of Medicine. Implications for investors – particularly surrounding our taxable income and investment profits, are discussed today.

To start, I must warn you that I am about to rant a bit here. For good reason. Justin Trudeau lovers, beware. Don’t read this if you feel that the Liberals are “your guys”. I don’t want to argue my point here, and  will not post comments as such. Write your own blog if you feel differently.  After the rant are thoughts on dealing with potential budget changes. Skip to that part if you love the PM. These are my opinions and not necessarily those of my staff. I do this blog for free and don’t post annoying flash-ads etc. Instead…The price of admission is that once in a while I blow some steam off.

As the rest of the world was preparing to import vaccines, Justin Trudeau prorogued Parliament last summer. Other governments stayed open- it was only too obvious that this was an attempt to make Canadians forget about his WE scandal, and to avoid answering parliamentary enquiry about his expenditures. Expenditures that extended far beyond COVID stimulation – when we needed the money the most. This blog covers just some of those expenditures. You will be shocked.

Other Governments, who stayed open during the crises, got on top of ordering the vaccines. President Trump secured a $200MM deposit with Pfizer last summer, while Israel and other nations were leaders the situation. Hey, we didn’t need to be #1…but # 55 and “below average”?  After all the propaganda spewed about Canada’s wonderful response during the initial stages of COVID, and the subsequent boasting by Canadians of our superiority to USA’s control measures….the tables have reversed. It was ironic that Canada discouraged travel to the USA (for example) this winter when, in fact, Canada was the more dangerous place to be. Propaganda had us believe otherwise. The truth is, well over 50% of all Americans are already vaccinated (21% fully vaccinated). They are seeing declining trends in the virus. Meanwhile, ours are increasing. Where’s the Canadian Government bravado, boasting about COVID protocol now?

Canada’s embarrassing vaccine shortage is forcing many people to be told to wait 3 months for their second shots in the 2-shot protocols – for example, my brother in law and a friend were both told that 3 months is their wait times for the second shot. This, when the Pfizer and Moderna recommend 3 & 4 weeks respectively, with a maximum of 6 weeks between if circumstances make the recommended protocol impossible. In other words, less shots – at the wrong interval – in Canada. At least, that’s according to this article.

As such, much of Canada is forced into lockdown thanks to our Prime Minister’s “decisions”. Canadians blame the lockdowns on the provincial governments. For example, Ontario, Alberta, Quebec premiers are facing some wrath due to the nonstop lockdowns. The fact is, the premiers are not to blame. The blame lies directly with Justin Trudeau for not keeping government open while other countries did. Proroguing government, hiding in his cottage, and not facing the music for his third ethics charge (yes, three of them).  This influenced his ability to be on top of the vaccines. Canadian job loses, small business closures and wealth disparity continues to get more polarized due to one person’s decision to put himself ahead of the country. This is creating higher debt, which in the long run will need to be paid off – our taxes will rise to pay for Trudeau’s decisions.  And more importantly – people are getting sick, or dying. If Trudeau had been on top of purchasing the vaccines, how many people would have been saved? The answer wasn’t to lock things down (close the door when the horse escapes the barn). The answer was to do the right thing at the right time like the grown-up country governments did, and get the vaccine rolling on time. Unforgiveable.

Ok- rant behind me – where do you and I as investors fit in given that we must pay the price for our PM’s hide & seek game (beyond living in the one of the worlds worst COVID – safe environments)?

As CERB cheque continue to go out, I am hearing more and more about our government embracing the idealism of Universal Basic Income. Free money for everyone.  Although unlikely to be enacted in the upcoming budget, I hear it is on the table for future budgets. Larry McDonald of Beartraps recently noted in a research report that due to the COVID support CQ’s in the USA, companies are finding it hard to fill entry level jobs. This, despite high unemployment. In other words, when the spread between a wage and a free paycheck from the government isn’t wide enough, who wants to work? How will this affect corporate profitability? How will the free money for all be paid for? Perhaps by taxpayers who actually work, just maybe?

More pressing is the proposal by the Federal Liberals (Ontario) regarding budget changes. Take a look at the list below. I am hearing from reliable sources that there is a very high probability of the capital gains tax going from 50% inclusive to 60% inclusive in the Federal budget on April 19th. Thereafter, the amount of gains fully taxed will continue to creep up every year. See the proposal listed below.

To me, this adds further incentive to trade vs buy and hold. I am not a tax advisor, and would steer you to talk to your own advisor. But, in my mind, I have always argued that if a portfolio doubles in 10 years, it is better to realize 1/10th of the gain through trading each year rather than buy and hold the same stocks and realize the entire 100% gain in 10 years. To me -his makes sense from a marginal tax rate (spreading gains may reduce your marginal rates) and a future taxation point of view (taxes rarely go down over time). Now we have a probable policy that should solidify my view on realizing gain incrementally rather than waiting for a future date. Rising taxes each year.

As for the inheritance tax, and other suggestions. Well, perhaps Former Trudeau voters will be recipients of many of these new taxes. Personally, I like the Max Bernier flat tax system. But that’s a discussion left for another day. For now- brace yourself, crew. Consider the potential of the list below, should any of these be suggestions be enacted, within your own financial planning: 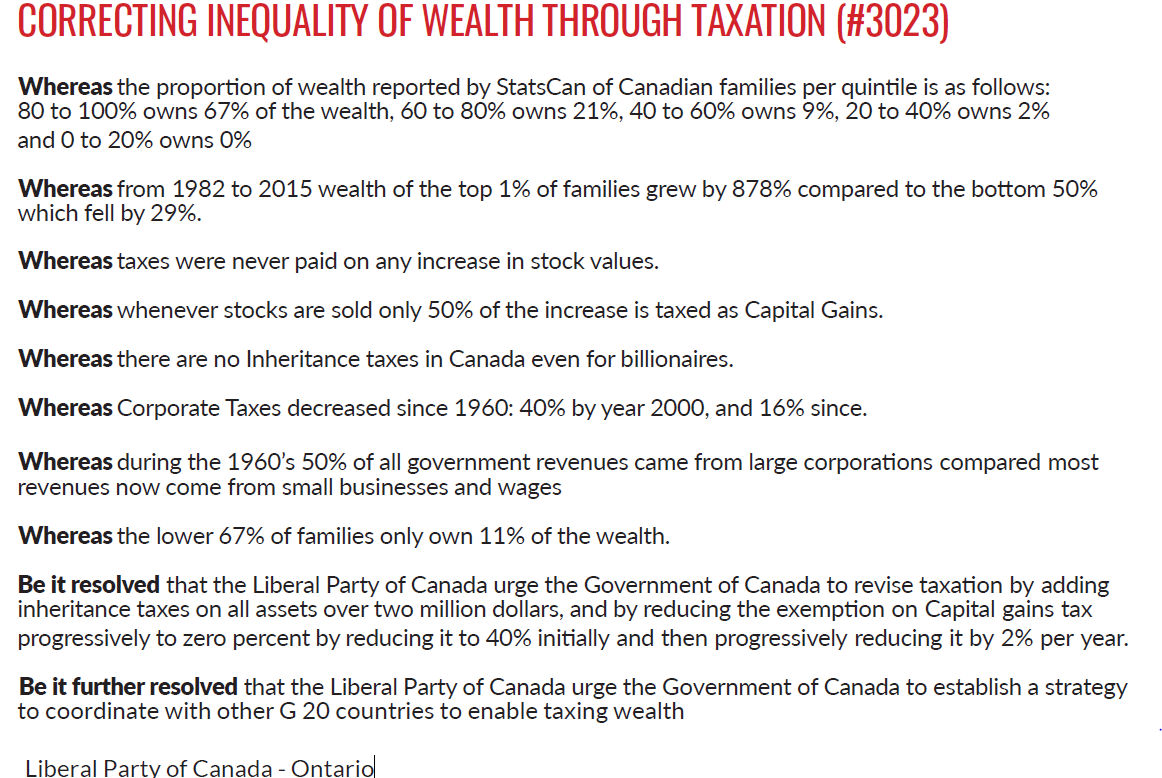