Today I’ll be rather to the point, as I want to go through some of my own thoughts, along with pass a few research comments over to you from a couple of smarter people than I am. On Thursday or Friday, I will post an updated Bear-o-meter report, per a readers suggestion. 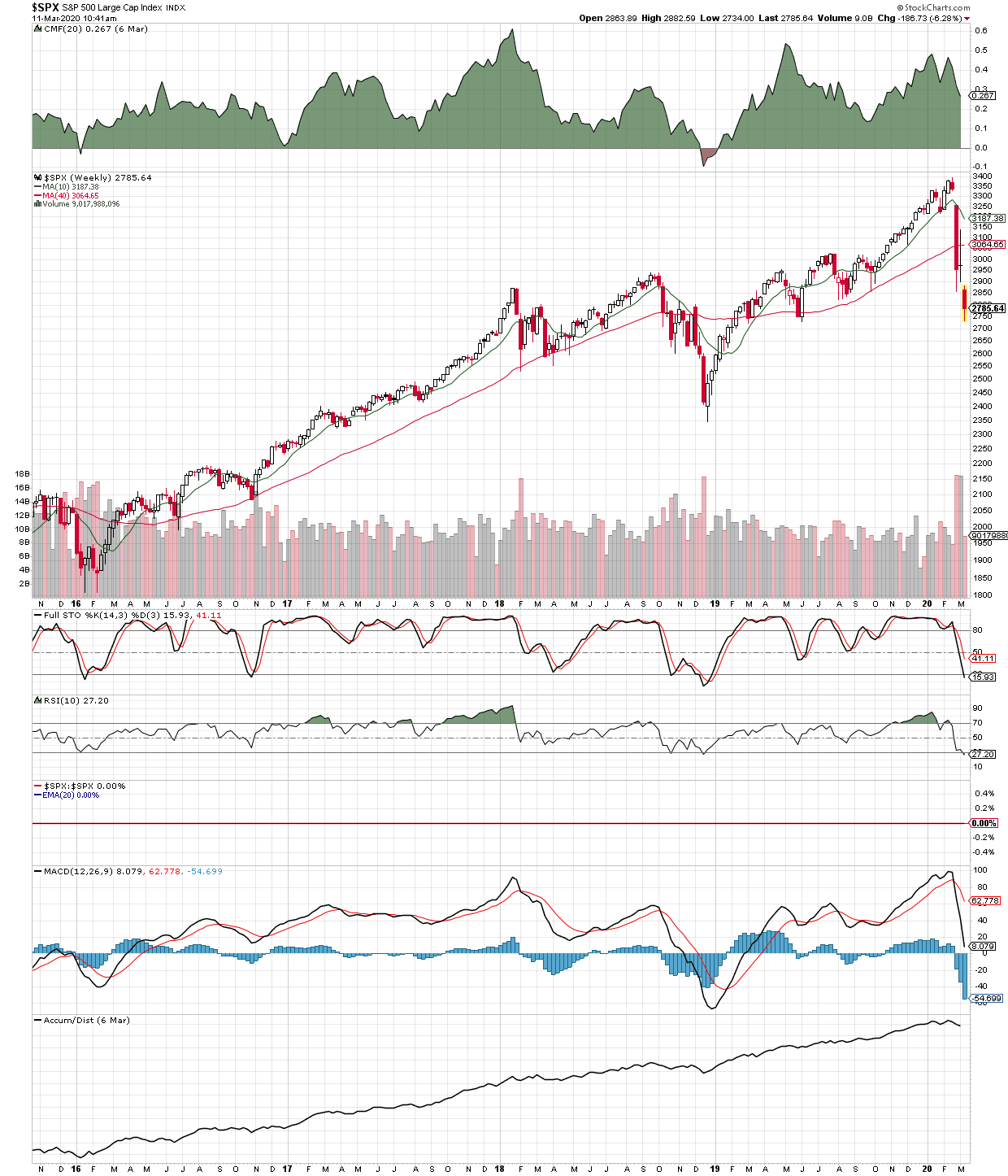 The S&P 500 looks to be nearing, but not at the end of its meltdown.  Recall that my view is for an eventual consolidation “box” per this blog.

On the above chart: Longer termed momentum indicator MACD needs to settle and roll up—its nowhere near that point yet., Even RSI and Stochastics are not rolling up yet. Having said that, they are just entering oversold territory. Perhaps there is a bit left in the selloff. Perhaps things will bounce around enough for a bullish hook setup. The point is, things are pretty oversold, and it’s a matter of time before a meaningful rally occurs. Note that next-support below 2850 is just over 2700. So far, that’s held. Sentimentrader notes: Such widespread selling was only matched twice: once during the 2008 financial crisis and once during the August 2011 global stock market crash. Both cases led to a rally over the next month.

Technical Analyst Associate and ValueTrend Intern Aleks Bozic drew a 40-period SMA on a monthly chart above (thus, a 40-month line, which equates to something like 3.25 years!) on the SPX. He notes that we can see the importance of the SPY holding or breaking this 40-month Moving Average in 2012, 2016, and 2018. Let’s see whether it holds now in 2020. As of right now we are still in an uptrend on the Monthly Chart. We haven’t broken the 40 monthly moving average. If we break, like what happened in 2001 and 2008, it might suggest that we are officially in a downtrend on the monthly charts.

Larry McDonald on why he likes Emerging Markets, Materials and yes, even energy!

After over 30 months of Brexit, Trade War and COVID19 risks – still too much capital is hiding out in the USA. Next 12 months, we expect a US dollar collapse with emerging markets (EWZ, EEM, ECH, EWY) offering large upside returns. Likewise, drawdowns in materials XME (-79%) and Energy XLE (-67%) are at high capitulation, screaming buy levels. In the months ahead, we expect a multi-trillion fiscal response from G20 countries. Sell the rallies in US equities and put money to work in EM, materials, and energy. Historic capitulation = opportunity.

Larry on China China Xinhua News: Wuhan has closed all of its 16 public facility-turned temporary hospitals as the number of COVID-19 patients continues to drop in the city

China cases slowing are a positive sign for the global economy that the virus’ spread will not continue at a parabolic rate globally. However, the United States has clearly not taken the same precautions at stemming the outbreak compared to other countries. In our view, this speaks to emerging markets, Europe, and China coming out of this slowdown before the US. Much like the was first into the financial crisis and first out.

The next Webinar features ValueTrend Fundamental Analyst Craig Aucoin, CFA. He will discuss how we tie fundamental factors in with technical factors in selecting stocks. Link to sign up for the webinar here.

Medcan virus expert points out the reality behind the Coronavirus mortality numbers.