Here are 5 commodities that many of us hold directly or indirectly through ETF’s or stocks. You might want to be aware of their patterns when reviewing current or potential trades in securities around this group.

Crude oil is not in its favorable seasonal period for entry until February. Despite the spike this week, the weekly chart suggests it’s not oversold enough to rally much more. You’ll note the nice looking bottom it is putting in – I maintain that WTI will begin to move into the $60-$62 zone as seasonal influences later in the winter kick in. For now, I am not in the trade, but do plan on entering in the coming few months. 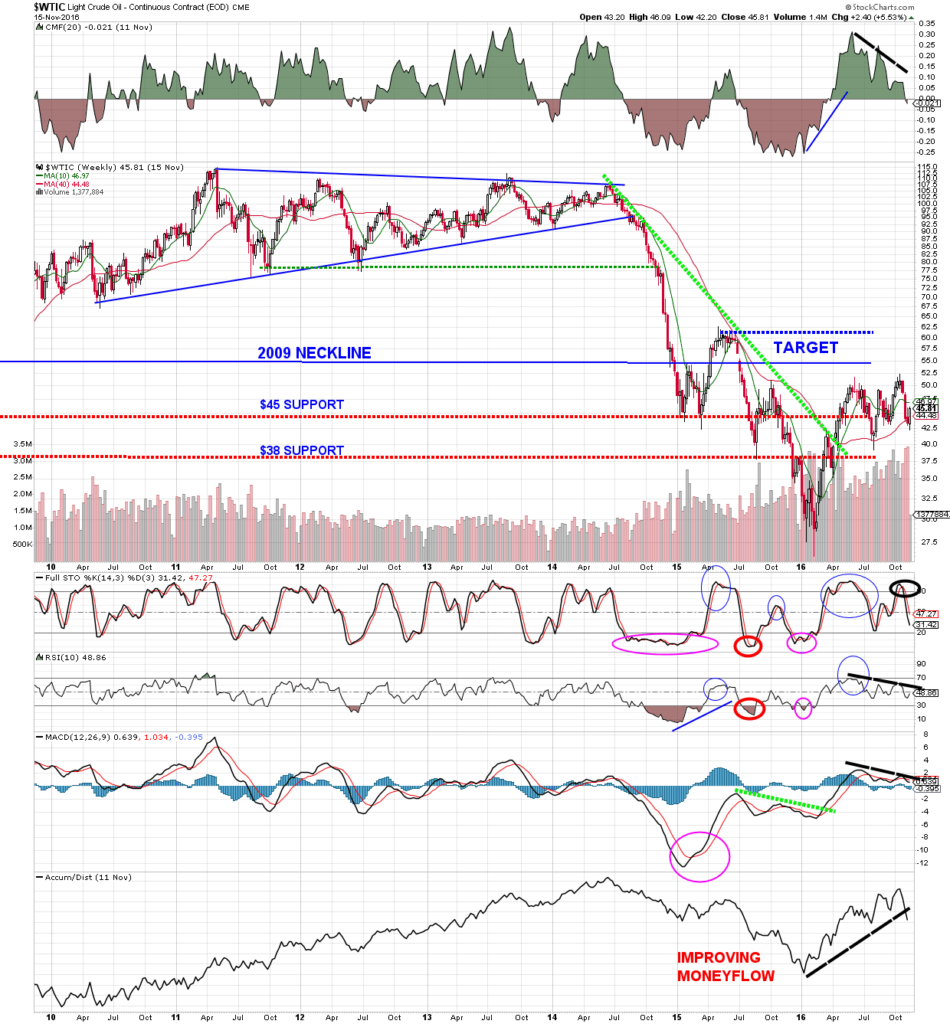 Nat gas tends to be strong from October until the end of the year, influenced aggressively by current weather patterns. Recently a warming trend in the central and east have been playing havoc with this commodity. After breaking its neckline from  a nice bottom formation, the formation failed. Back to the trading range neckline it went. All is not lost, but it looks less attractive. We had two positions in gas – one in UNG, and one in a stock. We exited the UNG with an unpleasant 20% loss, and continue to hold the stock – which is flat for us. We feel that if a gas turnaround is possible, the stock is the better risk given its lower volatility. 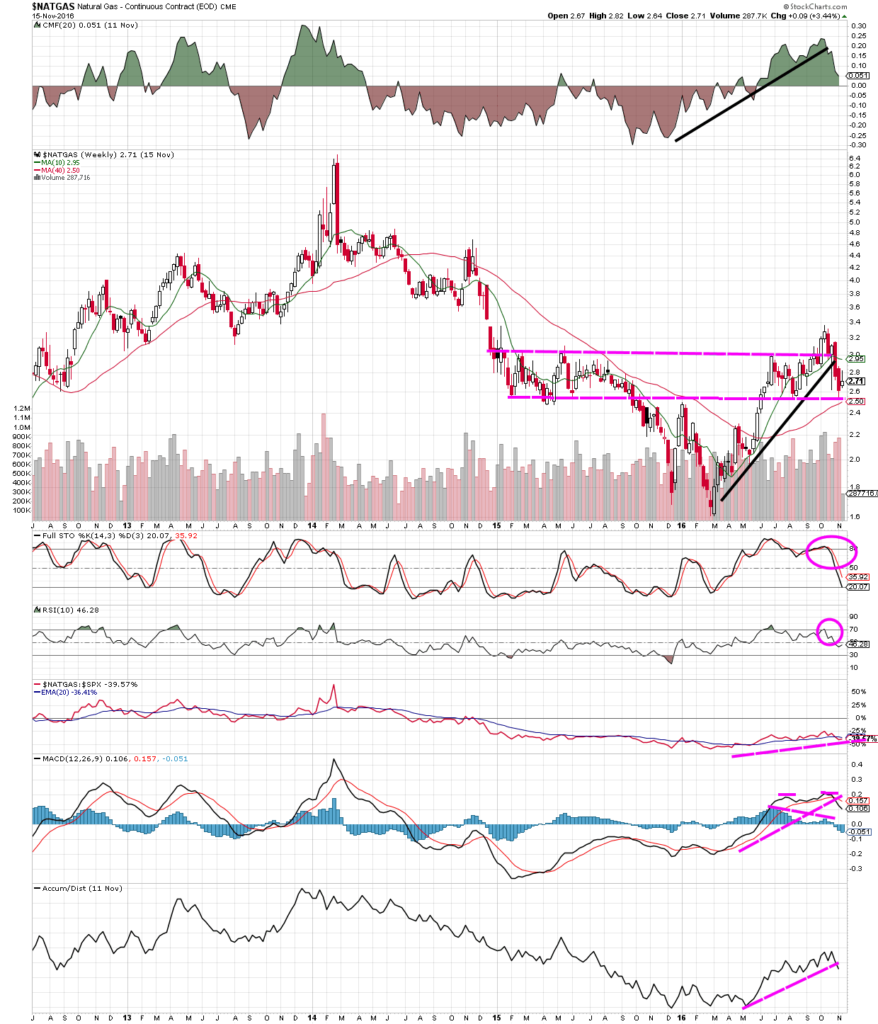 The materials sector can be strong from this time of the year until early January. Aided by the Trump victory, the sector is off to a good start. Copper, in particular, which typically doesn’t start its seasonal period until the New Year, has begun an early move on the Trump trade. It’s a little overbought at this stage (and selling off a bit as I write), but the downtrend looks like it’s been broken. The divergence in some of the momentum indicators gave some pre-election indication that it was ready to go. 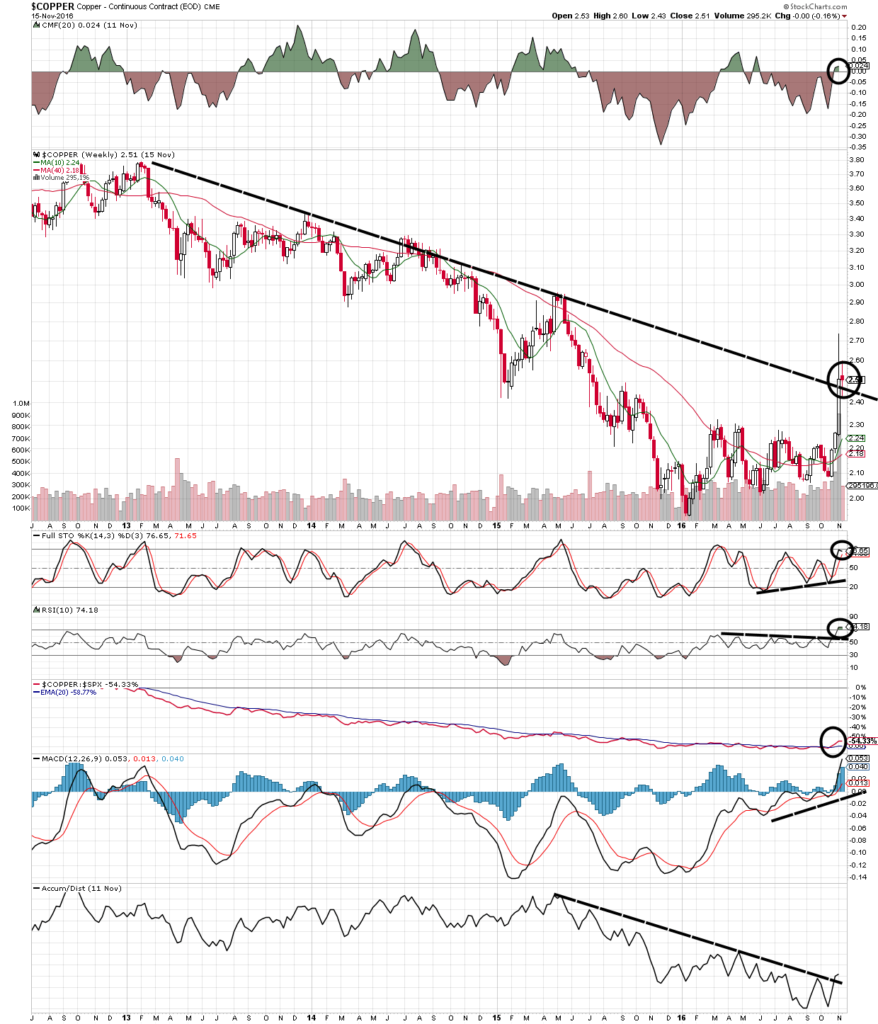 Silver typically moves well from November through to February. This year, after staging a nice breakout – possibly a cup & handle bottom – silver has regressed. While it may be worthwhile to wait a little longer to see if the seasonal influences pick up, the trade looks like it was a failed breakout. I hold a position in silver, and it’s likely to be sold on an oversold bounce.

Gold has a similar pattern, although a little more aggressive in its movements. Gold’s seasonal period of strength ended in October. The chart below shows a target I printed for gold in a prior blog – I left my original notation on the chart. Nailed this one! I’d avoid gold for the time being.

Rather than print the charts for all of the soft commodities, I figured I’d focus on ag’s – which is sort of an indirect and diversified play on them, plus a play unto itself. I didn’t do a full-blown study on this chart. You can see why I’m not yet interested in the sector if you understand the basics of trend analysis. Remember: Up is good. Flat is ok. Down is bad. The lows are not getting lower on the Ag chart right now, but they aren’t going higher either. At best, the chart suggests early, choppy potential basing. I’d wait before getting involved in this sector.