When I first began studying Technical Analysis in the early 1990’s, it was considered a form of witchcraft or voodoo. At that time, mutual fund popularity escalated.  The Investment firms I worked with at the time embraced their products wholeheartedly. The advent of the “DSC” (deferred sales charge) provided massive commissions to the investment Advisors/Planners who sold them. They, along with their investment firms. and the mutual fund companies themselves profited greatly. In order to fund these upfront 5% commissions paid to the Advisor (not to mention the trailing commissions), the fund would lock investors into a 6-7 year declining penalty. And then charge these unsophisticated investors an incredibly high management expense ratio – often 2.5% – 3%, plus built in expenses!.

There was much to protect against losing that gravy train of income for both the fund companies, and the investment firms who sold them through their network of salespeople. Technical Analysis, which proposed that there are ways to step into and out of markets in order to avoid risk and potentially increase returns was counter to a salesperson’s vested interest in selling you a locked-in product like a DSC fund. Thus, the era of “buy and hold” began. My first myth addresses one of the statistics that industry used to banter around to keep the gravy flowing:

One of the favourite tools of the mutual fund “buy & hold” camp was the “perils of missing the best performing days by selling your investments” myth. Since the beginning of 1998 to the end lof last year, for example, if you missed the 40 best performing days on the market you would have missed out on 114% of the gains vs. just buying and holding. Wow! Surely that means you MUST never sell out of the market!! WRONG!! What the buy and hold guys forget to point out is the fair comparison of missing out on the 40 worst days during the same period. If you had managed to do that..you would have made an EXTRA profit of 952% over buying and holding. Um, thats like 9 times the potential upside for selling out correctly vs. the potential for lost profits by selling the best performing days. Clearly, you would have to be clairvoyant to sidestep all of the bad trading days over the past 20 years. But..you would have to be equally unlucky to miss all of the good days! Come on guys– the statistics show us that if you have a half decent methodology of spotting overbought vs oversold market conditions, you are nine times better off to sidestep potentially risky situations — all things being equal.(chart data yahoo finance). 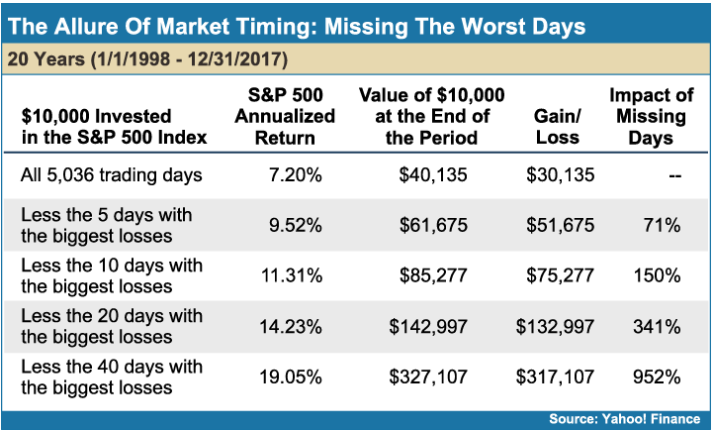 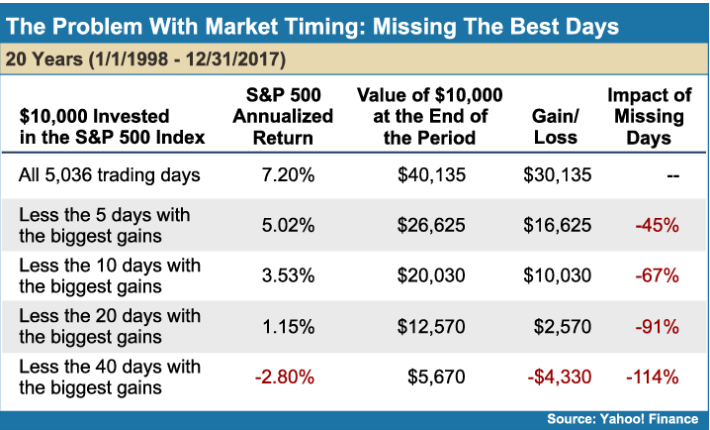 All successful trading strategies have their outliers: Mind-blowing outperformance one year, and wretched underperformance in another. A good strategy will deliver on its mandate more often than not, but not all of the time. For example, ValueTrend’s mandate is to “limit your risk, keep your money”. Our strategy attempts to provide an annual rate of return of about 7-8% after fees with about 7% or so deviation from that return in most markets. We tend to be pretty consistent in that goal.  Our lack of big downswings in bear markets, and lack of big upswings during exuberant markets helps.  Most of the time, we tend to keep the volatility (deviation of returns) tight. Sometimes, however, we underperform or outperform beyond our expected parameters. Those years happen occasionally, but they are not the norm.

Some manages or investors have a mandate of beating the market.They may have a more passive style, hoping to profit by buying undervalued stocks and eventually seeing their value materialize. Such managers tend to have much greater deviation in return. They can have big negative or positive performance swings. The trade off is that, if they are good value managers, they can outperform the market by discovering undervalued stocks very early in their investment cycle. These stocks can materialize into big winners later in the game. Warren Buffett and Peter Lynch come to mind when I think of this style.

Neither strategy (i.e. ValueTrend’s low-volatility strategy, or the value managers buy cheap and tolerate volatility) is “right”.  It’s really up to the investor to decide which strategy makes sense to them. In either case, though, you don’t get a straight performance line.

Lots of readers of this blog like to use technical analysis indicators. Be aware: you only need a few indicators to form a trading system. Some indicators cancel each other out due to their trading horizons. For example–stochastics and MACD are both momentum indicators, but stochastics should really only be used by shorter termed traders, or to finesse a trade. Its less of a longer termed decision making tool, whereas MACD is a far greater tool for mid-termed traders. Indicators should be chosen to represent trend, momentum, relative strength, money flow and / or volume. Too many indicators cause “analysis to paralysis”. It’s like pouring every spice in the cupboard into your soup. Yuk! If I may humbly suggest, please read my book Sideways to help you select amongst the appropriate indicators for your time horizon, and to help you formulate a logical trading strategy. It’ll help you keep it simple. 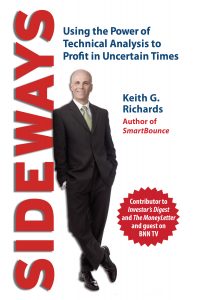 Actually, you just need to win bigger than you lose – not necessarily more often. I’ve read studies suggesting that the best traders in the world win only 30%- 70% of the time. This means that at the very best – they lose on 30% of their trades! The lesson: take your losses, move on. Find a logical system that bests the odds more often than not, and stick with it. I’ve often said that our clients pay us to follow a system, because they are too emotional to follow one for themselves. A system will save you from yourself by saving you from your emotions. Take your loses, move on. Remember, a losing stock owes you nothing!!