I usually like to quote other analysts and sources for a backdrop in these blogs, but today I am going to quote myself from my last blog, here. So far, my market call for the probability of a weak/flat market into the July 27th meeting followed by a nice pop on the Wednesday and on has been 100% accurate. Here is my quote:

“..stocks could be flat or sell off into Wednesday´s Fed meeting. Then, they have a decent potential to rally, especially assuming we get less than 100 bps of tightening.  Not a prediction. But a very decent potential of happening.” SPX target of 4170-ish.”

Today I would like to carry on that thought with some neartermed market views. One reader commented that he felt 4170 wouldnt be hit. I cannot disagree. My stance is that 4170 is a max target (unless a miracle happens and it is blow through). I will sell on the first sign of my predicted mini-rally fading. I dont really care if that happens at 4170 or…now.

In a nutshell, I trust this rally as much as I trust:

Below are some thoughts regarding why this rally may fade:

Reason 1: Seasonality combined with mid-term patterns and the 200 day SMA

SentimenTrader published a performance summary of the SPX during August and September (the seasonally weak/volatile period of the year) during years with mid term elections. That’s this year, FYI.

As you can see on their summary chart below, there have been 14 up August-September periods, and 11 down periods in such mid-term election years. The average return during the down years was a loss of 9%, vs a gain of 4.7% during the up years.

Lets take that further. This is not your average mid-term election year for the markets. In case some of you just woke up from a 7 month slumber: We are in a bear market. Shocking, I know. A bear market is characterized by lower peaks and troughs on a weekly chart and a price level below the 200 day/ 40 week SMA. That’s where we are now. Here’s the next set of data from SentimenTrader – assuming the market remained above or below its 200 day SMA for those two months:

Yikes! If history repeats, we could be in for a serious spanking on the markets in the coming two months.

The daily SPX chart below contains the indicators that can help guide us to very neartermed movements. Not a trend. It only helps predict a neartermed blip. When we have a Bollinger Band test (high or low) and a hook from an oversold OR overbought RSI and stochastics, you often have a neartermed price move. Right now, we have a very definitive upper BB test, a probable hook down on stochastics, and an RSI signal that is over the median but is NOT hooking down yet.

Any sign of weakness in the coming few days will complete the picture for a reversal. This, whether we reach my potential target of 4170, or not. Its all about what IS happening, not what SHOULD happen! 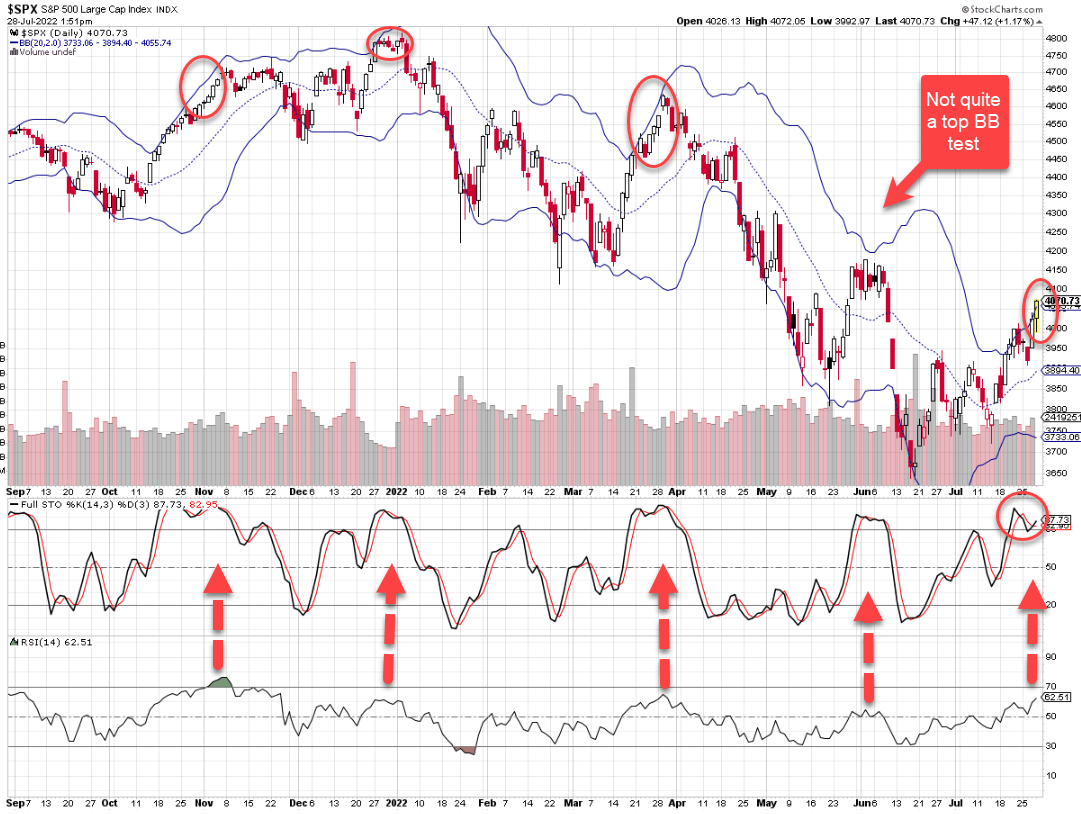 Craig and I were not the only ones who suspected a 75 bps rate hike on July 27th. So our predicting that was not a stretch.

However…Our predicting the market weakness into the meeting … and the strength after was somewhat unique to us.  Nobody else I know of was talking of that potential- not to say nobody else did. We viewed the 75 bps as a sign that – as I have described in other blogs — the Fed is aware of the potential of stagflation.  The 75 bps (vs 1.0%) is an admittance that they wont be hiking much more. The Fed just admitted – they cannot forcefully commit to future aggressive accommodation withdrawal – aka – you have seen the last 75bp hike this cycle, maybe for decades.

For most of this year – the Fed talked accommodation withdrawal – endless rate hikes out to Q1 2024. The Fed had been using “forward guidance” and its media pawns to tighten financial conditions hoping to suppress inflation. But, they over-cooked the goose. Both the Canadian liberals and the US liberals started far, far too late in:

Both governments played catchup on inflation.  In a panic, after denying inflation for too long. Then, they went too hard & too fast on tightening. This – while wastefully spending like a drunken sailors on frivolous left-wing appeasing expenditures. Canadian gender studies – really? Now, they recognize they are well  into the danger zone- too much money supply, too little action when it should have happened. So now, we/they are dealing with their own incompetence. Nearly certain recession risk or stagflation is forcing them to now open the door to easing soon!!!

Furthermore, we know the Fed doesn’t like hiking just before an election. And they sure want to reduce the unpleasant task of announcing an economic slowdown/ recession coming into the midterm elections. See my comments above, quoting research from SentimenTrader regarding the mid-terms. So they will be forced to live with something closer to long termed 3% or perhaps a bit higher , such as 4% inflation. This, while the economy slows. Stagflation!!

So- My next Fed/ BOC “prediction”: You’ll probably get a small-ish final hike in September (50 bps?), and the worry of more than that will casue some market volatility in the coming weeks. But, that rate hike may well be followed by easing possibly by the end of the year – or early 2023! This as I suggested in my very important “3-step” blog back in June. So far, that blog has been quite predictive. That policy reversal will likely be the signal for the end of the bear market. But it could start a sideways market… and that’s the subject of our upcoming research report.

So far, my thoughts presented on that blog have been pretty much 100% accurate. Now, the case for a pause in tightening after this hike is now stronger than ever, in our view.

So – The Fed and BOC can’t hike aggressively – per my thoughts above. That means persistent inflation with no likely return to 2% (their misguided target). I’m thinking double that (4%?). What happened last time the market witnessed persistent inflation? Well, that was between 1965- 1980. Albeit, CPI growth was much more aggressive than what we might see this time, its a good historical reference. Here’s the Bloomberg chart of CPI in that era 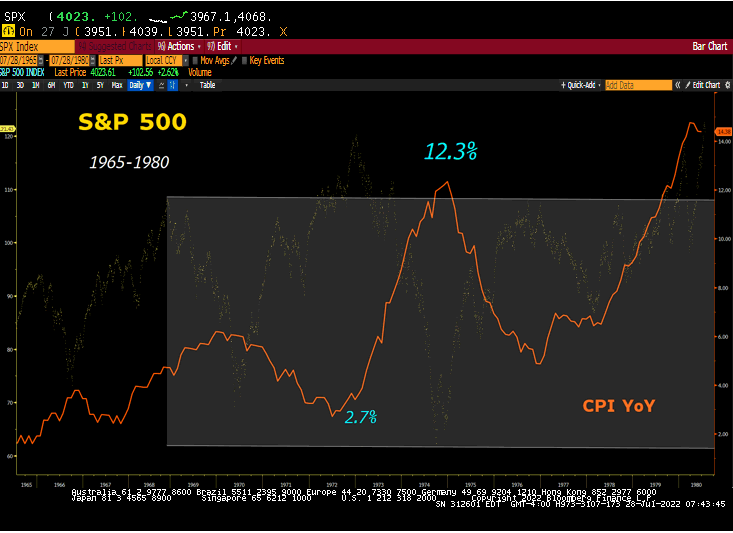 Here’s the DJIA with that era highlighted in a box. Notice the go-nowhere sideways market? This will be discussed in more detail in our upcoming research paper. If you subscribe to the VT update newsletter, you will get a copy soon. If you don’t subscribe, you should Click here to do so. 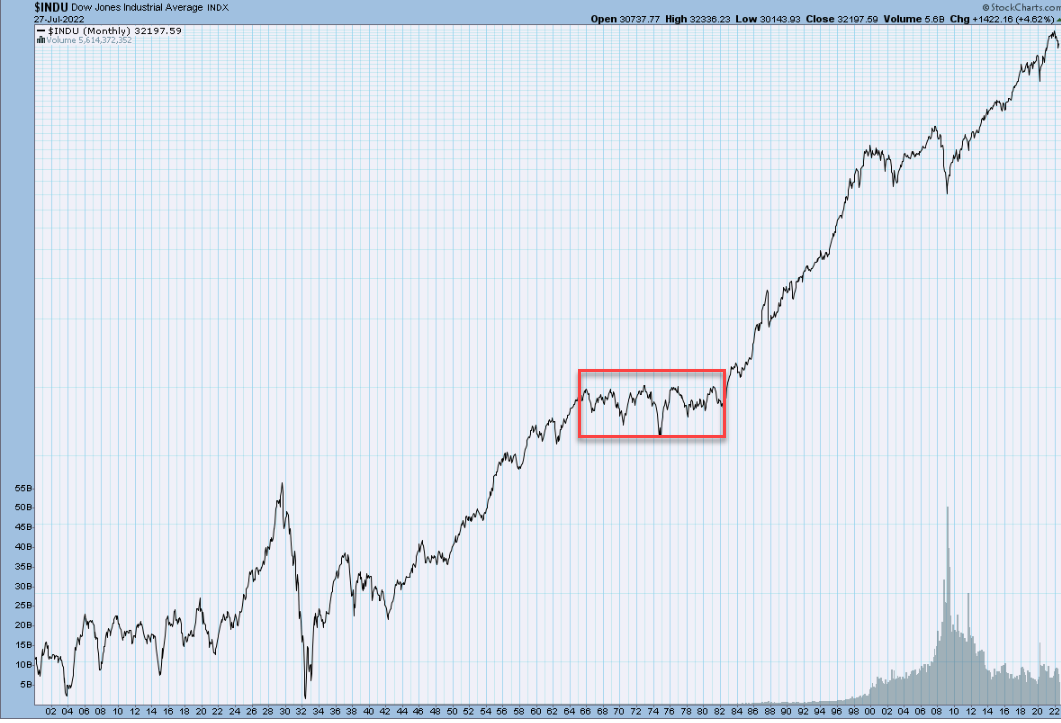 It might be noted that in the 1965-1980 sideways era, the 3 best sectors were Energy (by and far the best performer) followed by Industrials, and Materials. I’ve been talking a lot about the longer termed outlook for energy lately. See my upcoming video on the commodities space.

Also–I just published a video with some of the charts for the upcoming research paper. Click here to view it. If you don’t subscribe to the videos, you should. I have some very interesting interviews coming up in August with uber-smart guests. Click here to do so.

That’s it for today–prepare to receive our macro market research report next week if you are a newsletter subscriber. I’m looking forward to your input. As always, any questions on todays blog – post them below