I’ve mentioned in past blogs that the potential for a sharp rally beginning sometime between mid July and August is high. Briefly, my reasoning behind expecting a buying opportunity in that time period are:

With the above in mind, here are my favorite sectors, which I will discuss this Friday at 6pm on BNN’s MarketCall with Mark Bunting.

Seasonally speaking, this sector tends to move well between early August and the end of the year, according to Brooke Thackray’s guide. In fact, our friend Don Vialoux (www.dvtechtalk.com) made the SOIL ETF a top pick on BNN recently. I hate to look like an imitator, but I am intending to buy the same sector around the same time this year, so I’m making SOIL a top pick for my BNN show this Friday as well. The chart shows nice support at around $11.60, with a sell target at resistance of around $14.

Here’s one that the seasonal guys might argue with me on, (Canadian banks tend to move best after October)  but the chart looks ripe for a bounce for the Canadian banks. The sector looks to building a base, but wait for a breakout before buying. It may fail, and you don’t want to be in if that’s the case. Given the tendency for seasonal cycles to move forward a bit lately, I think this sector is a decent bet for at least few months, provided we get a breakout through $16.80 or so. The 3.7% yield doesn’t hurt either. Below is the chart for BMO equal weight banks ZEB ETF. It could reach $18 or higher sooner rather than later in a market rally.

I’ve been out of gold for a year now. Bullion has been forming a large right-angled triangle. This formation can be quite bullish, especially if the triangle breaks to the upside. Given bullions typical seasonal strength from July to October—I’m looking for a nice move in the coming weeks. I prefer playing bullion over gold stocks – it’s more of a pure play on a technical pattern. 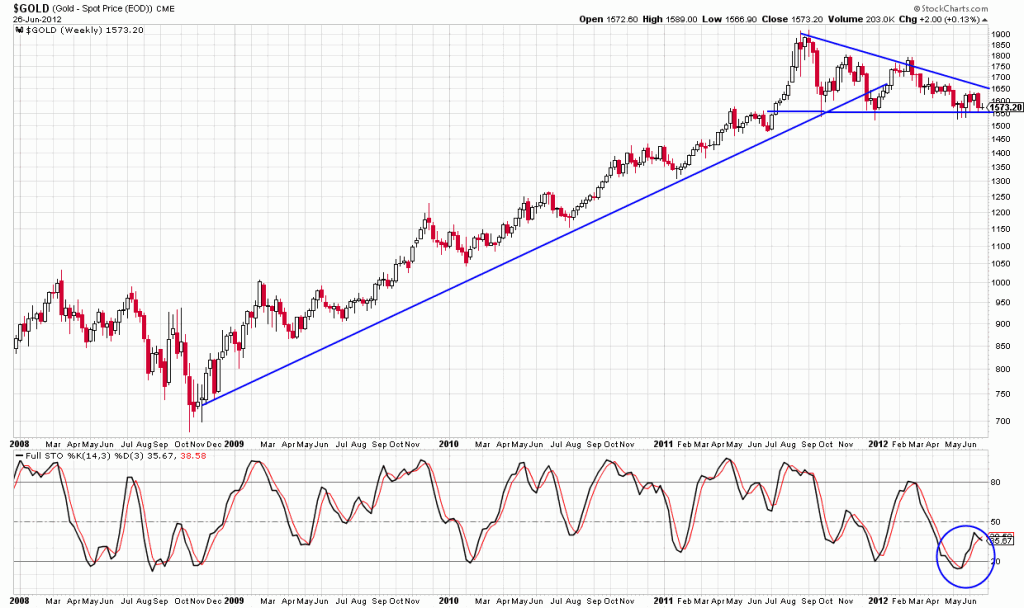