Over the past 2 entries, I have emphasized that the markets look a little overbought right now – especially the NASDAQ. As mentioned last week, the market can sometimes keep going for a while even when facing technically overbought signals, but eventually the indicators usually prove accurate. Today (Monday January 30th) may be the start of a short correction. Don’t look for a massive bear market just yet. The Fed’s message to keep interest rates low, and market participants belief in the potential for a QE3 program will keep things afloat for a while longer. I hold a 25% position in cash right now having sold much of my technology and higher beta positions. I’d expect to be spending that cash shortly upon a correction into S&P 500 1280 + or – 10 points. Here are some interesting charts to watch for what to buy, and what might be avoided.

Gold broke a three year uptrend last September, and a new downtrend was confirmed by a series of lower highs and lower lows during the last quarter of 2011. My downtrend line has been broken (see chart), which is bullish, but classic technical analysis suggests that gold will confirm the break its downtrend if and when it takes out resistance at 1750.  A few momentum indicators such as RSI and Stochastics suggest gold is overbought–it will be interesting to see if it breaks or fails at the $1750 level. What happens over the coming days may confirm or deny whether there will be bullish times ahead in the near-term for gold.

Financials are often strong from December to the spring, and the banks seem to be living up to that seasonal trend. The BMO equal weight bank ETF broke out through technical resistance at around $16.80-$17, and is now pulling back into that area in a classic retest pattern. This may be an ideal time to jump into this sector through individual bank stocks or an ETF. Disclosure: I bought the aforementioned BMO ETF last week in my professionally managed portfolio’s and personal holdings.

Another interesting looking chart, the TSX 300 seems to be breaking its downtrend. After being severely trounced last year, perhaps this trendline break signifies a better year for our homeland index. While the TSX, like most markets, is a little overbought at this time according to momentum indicators, it is interesting to see that it is currently challenging the 200 day MA and took out its last rally high. These developments suggest a break in the downtrend. The TSX may be a leading market for the coming months. 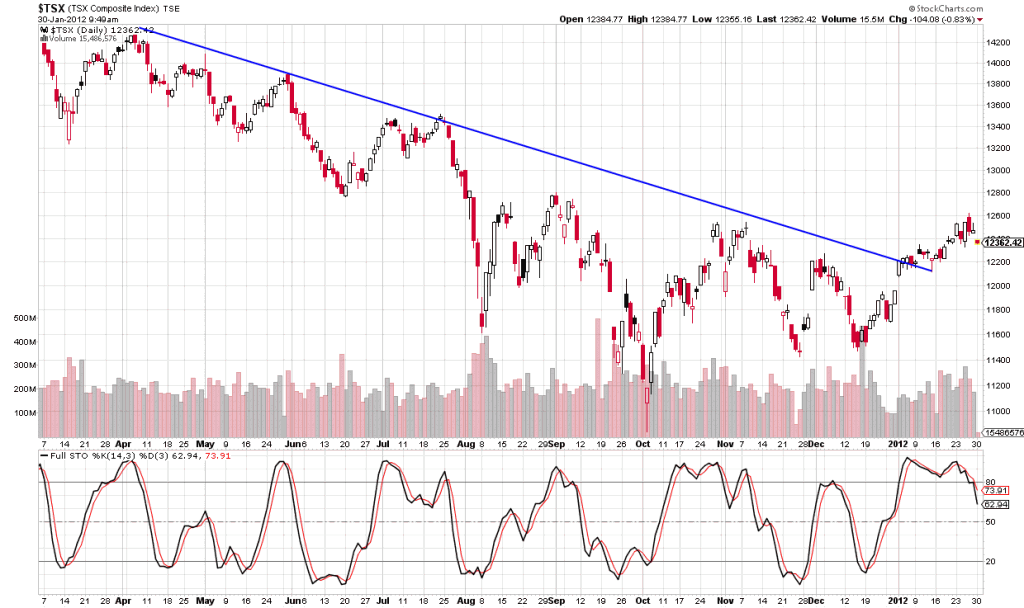