An interesting round-table discussion was held by BNN television featuring:

One interesting observation by Mr. Ellis on the panel was the potential for earnings to underperform current estimates due to spending cuts initiated recently under law by President Obama.

The current average estimate (consensus) for the S&P 500 is $113 for year end. However, Mr. Ellis suggests that earnings may in fact come in closer to the mid $90’s.

The mean average PE ratio for the S&P 500 has been 15.5 for the past 142 years (source: multpl.com). That might suggest a year-end target of 1472 for the S&P 500 (95 x 15.5). Take this for what it’s worth (multiples can expand or contract based on crowd behavior), but it is interesting to note that all three participants of our round table discussion have a similar outlook for the markets, despite our very different approaches to analysis and money management. In a nutshell, we are all wary of a likely pullback in the coming months. I’d highly recommend you watch the clip.

For more information on my current outlook, a detailed article was published by Investors Digest, which can be accessed free at this link: here.

A reader asked me to comment on the outlook for the Nasdaq on this weeks sector summary. The NAZ broke out past its 5 year highs and recent resistance point of just over 3200 – although the index is nowhere near its tech-bubble highs of 5000. 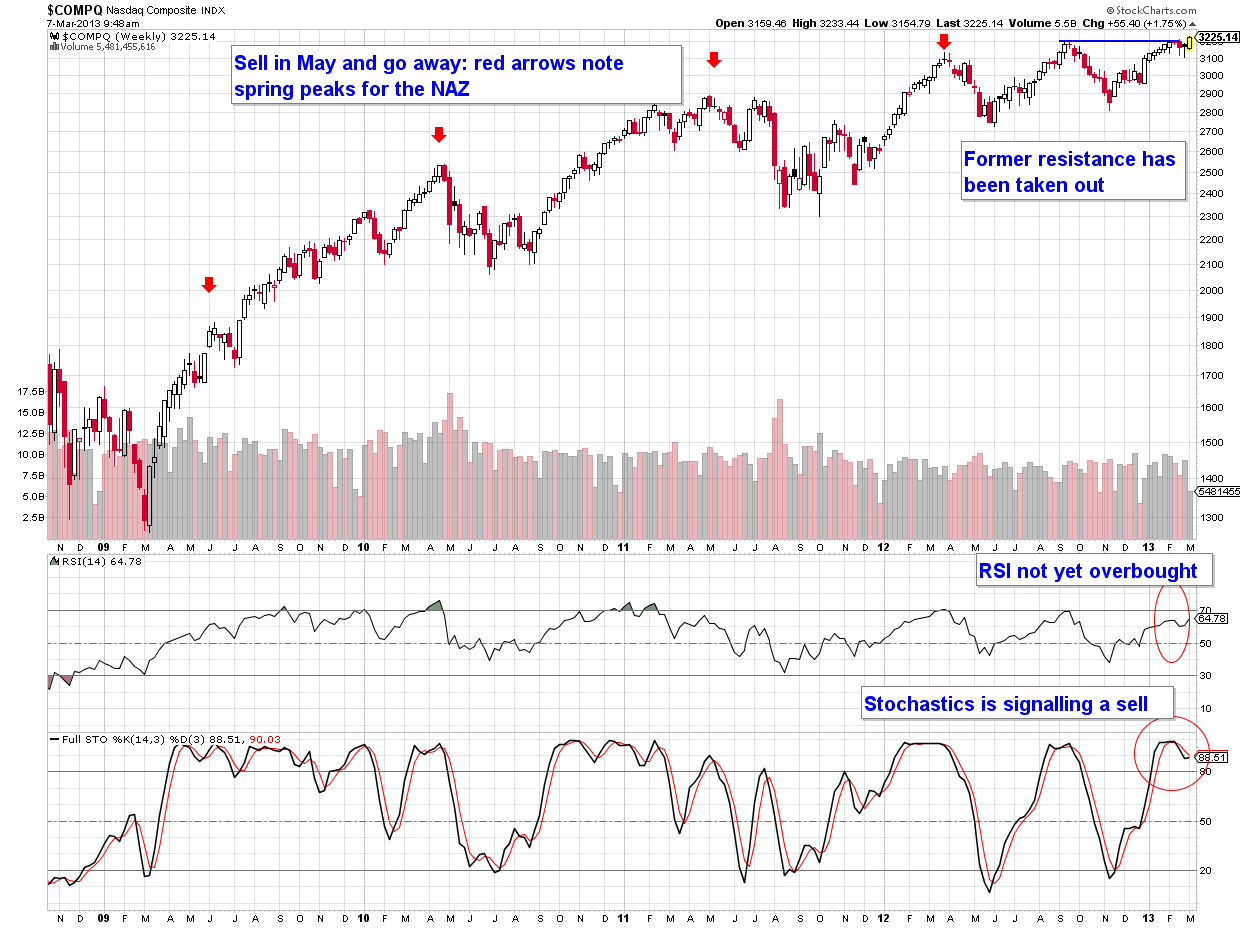 The NAZ is not currently overbought on the daily or weekly chart according to RSI, but it’s getting up there. Stochastics on the weekly chart does seem to be rounding over. No significant overhead resistance lies ahead for the Nasdaq, suggesting that the uptrend may last a while longer, assuming you want to ignore the stochastics signal. Watch RSI for overbought and rounding over – that would be a broader sell signal than the shorter-termed stochastics- and it’s had a few good calls in the past when that has happened–see my notations on the chart. The Nasdaq has been, along with the smaller capitalized stocks (IWM), a market leader during this phase of the bull market. Seasonal patterns have been favourable for many of the sectors represented in this index – although some, such as technology, are now past their normal seasonal strength period. The Nasdaq has a tendency to peak in the spring -see my arrows on the chart marking spring selloffs – several of which were coinciding with RSI signals over the past few years. While I would not be inclined to argue with the current trend, I am wary as to how much longer the party will last for the Nasdaq.