Here we go again. The SPX, despite its rally to new highs in late July of around 3025, has had more trouble breaking through 2950. It’s hit that level twice in the past. Looking at the chart below, you’ll see a failed attempt at or near 2950 back in October of 2018, and then again in May of this year. Despite what appears to be yet another failed attempt at breaking 2950, the market has not yet made up its mind that it wants to move into a bear trend. In fact, the chart tells us that we have indeed put in higher highs and higher lows since last years trendline break in December.

I’d like to address two things that are on every analytical investors mind right now. I’ll not go deep, but I want to point out a few facts that may allow us to maintain a level head. A level head means following the Advice of Howard Marks–who has advised us that we “cannot predict, we can protect”.  Howard likes to advise us to watch for signs of exuberance. He is a deep value guy. As technical people, we can watch for signs of topping and trend breakdown. That, and signs of sentiment breakdown.

I’ve been in the business since 1990. As such, I’ve not witnessed every inverted yield curve and resulting market. But…I can recall that when I came into the business, we had an inverted yield curve. In fact, the curve had gone inverted around the end of 1988. Yes, markets were a little rocky in the late 1980’s period leading up to the breakout in 1991. But most of that damage had occurred around the time of the period of inversion. In fact, 1991 lead us into the greatest bull market of all time. Later in the 1990’s, the curve inverted again on the back of the “Asian Contagion” and the near-default by Russia on their debt. This was, for my relatively naive self (I was only 8 years in the business at this point, and it had been all bull market good times to that point!) a little shocking. But really, the damage done to the markets was minimal. It wasn’t until an unrelated market bubble – the tech bubble of 2001, that the market suffered any true damage. But that’s another story.

For those interested, here is an article on Seeking Alpha that tracks the history and market moves after curve inversions.

I wrote about this back in October of last year. I called it earlier than most TA’s. Now, everyone is talking about it. Yes–expanding patterns can be a danger sign. If we reach the top and head down from the current expanindgin pattern – we could target the SPX to go into the low 2000’s. I recall the Dow Jones Industrial Average (black line is the Dow, red line is the SPX) was in an expanding pattern in the late 1980’s/ 1990 – see chart below. This did correctly predict the market correction. The inverted yield curve – discussed above– added to the case for a correction. Chart courtesy freestockcharts.com. 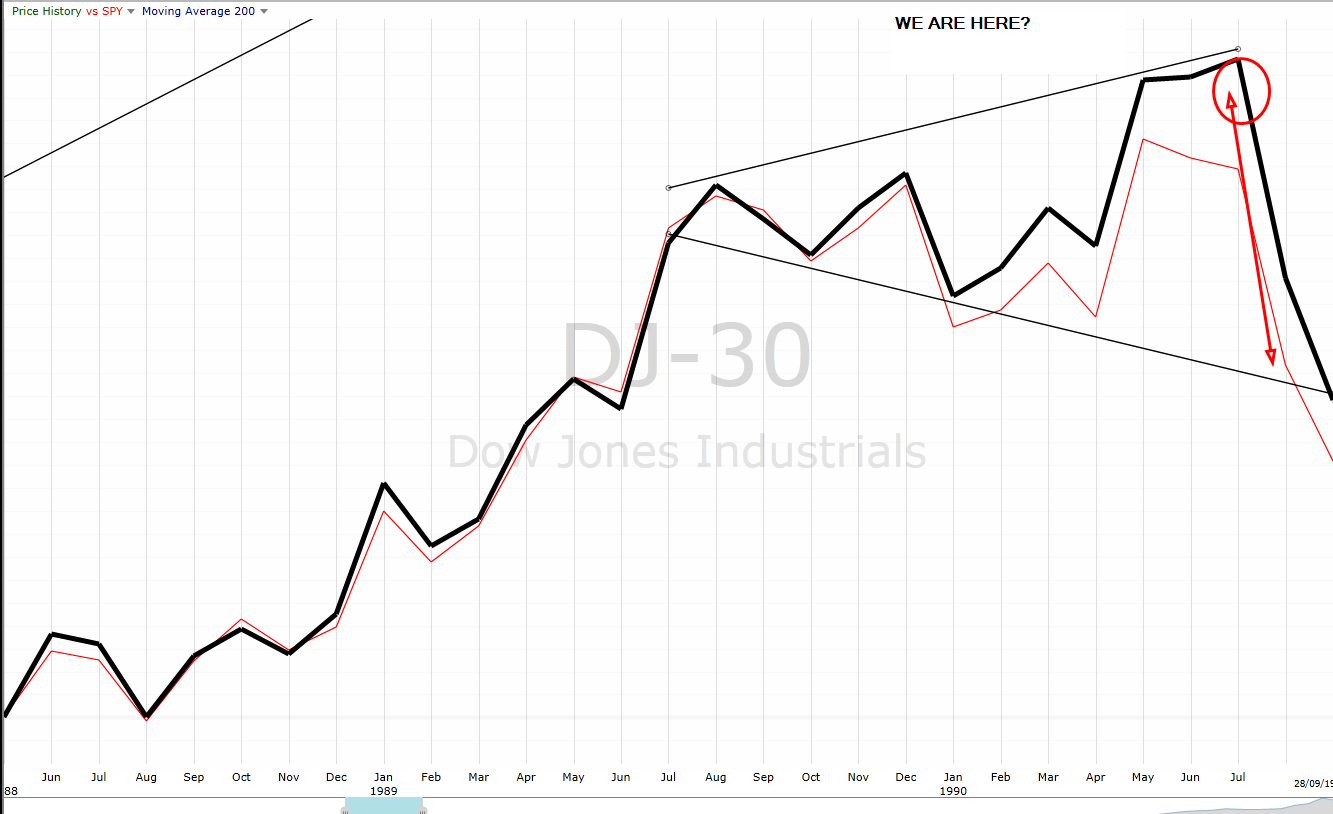 The megaphone again coincided with a bubble in 1999. See the Dow chart below – again, courtesy freestockcharts.com.

Are we in a  similar bubble right now? Get into your time machine and ask me this question in 2017 – I would have said yes there was a potential of a bubble (in fact, research my blogs from that year and you will read such a sentiment). The FANG’s and related tech stocks were outright silly. That silliness did lead us into the (so far) 20 month period of shart up/down swings. These swings have helped the FANG’s remove some of their excess.

Fast forward to today. The exuberance for these stocks has been largely washed out of the market – this, in the face of July’s new market high. That’s why we still have a climbing breadth line despite underperforming FANGs. Leadership changed – albeit to safety stocks. Some might find that of concern. But, a move into safe stocks beats the continuation of excessive returns on a select group of stocks. The difference is: one is a shift in sentiment to safety – but still remaining in stocks. The other is a buildup of an ever-inflating bubble. Believe me, bubbles are worse than a rotation of sectors. Surely you recall the 2008 excesses, even if you are too young to recall the 2001 excess. 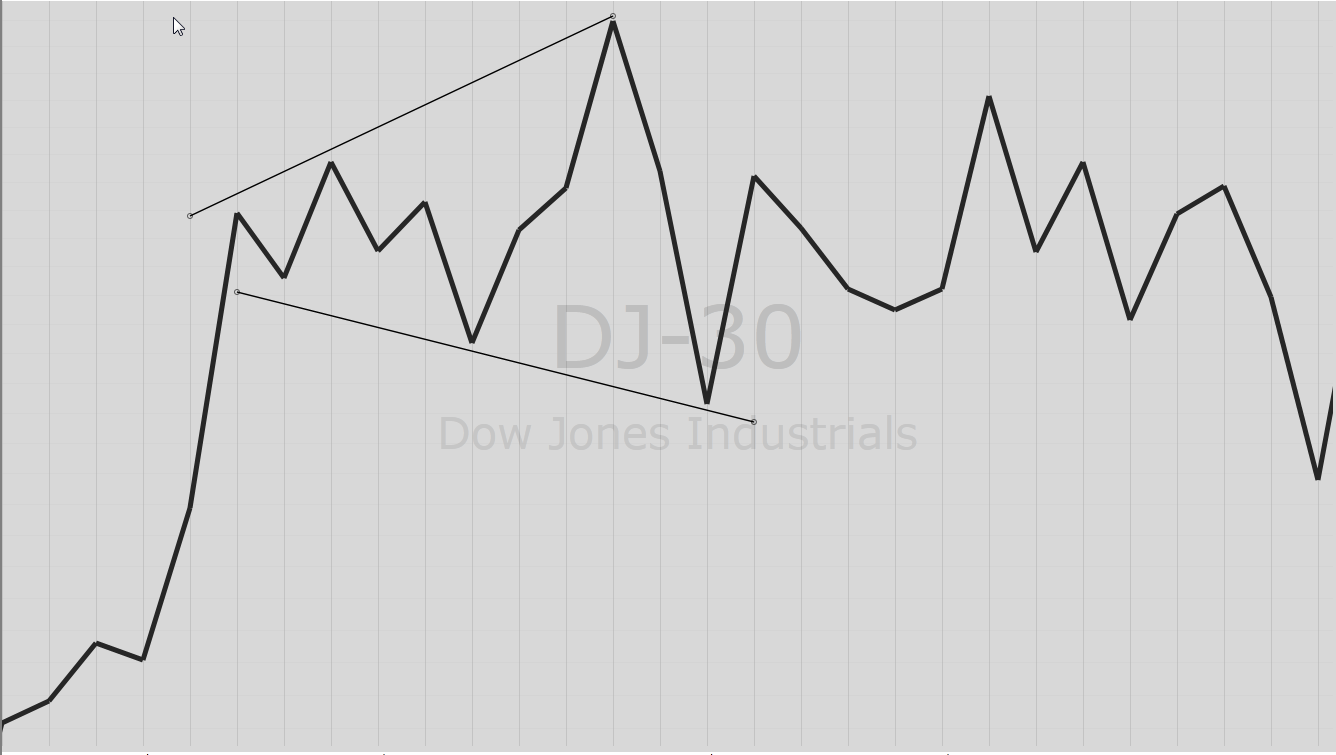 Still, we should keep an eye on the SPX for a break of its last significant low. That being about 2750 (see the chart at the top of this page). If that breaks…perhaps the expanding pattern will unfold to the downside. So far, not the case.

Don’t forget to register early for the MoneyShow. I’m presenting on September 20 at 4:15Pm on something a little different. I’ll talk about trading capitulation candidates–higher risk/return plays. I’m looking forward to this talk! Here is a link to register, and find out more about my talk. 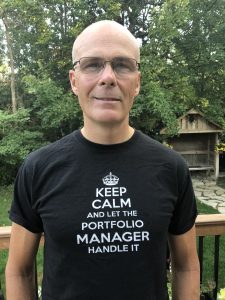