Home / 10 market observations you should be aware of

10 market observations you should be aware of

Bob Farrell, one of the pioneers of technical analysis, worked at Merrill Lynch for over 45 years. He died at age 86 in 2021, but he remains quoted as an icon in the field. Today, I revisit his famous “Ten Market Rules to Remember”, and apply them to current charts. I found that, no surprise, Mr. Farrell’s rules are as relevant today as when he retired from Merrill Lynch 20 years ago. Well, most of them (see rule #4). Read on for this great man’s words of wisdom, and my humble interpretation in today’s markets!

Rule1: Markets tend to return to the mean over time

The long termed view of the SPX shows us that the “mean” average (purple dashed line) is still below price. The trend channel outlines the extremes of the SPX since 1920. Bob’s rule of markets returning to the mean (purple line) over time, and often running along that line, would have predicted the current bear market as an inevitability. The chart suggests more downside to go before the mean line is reached. 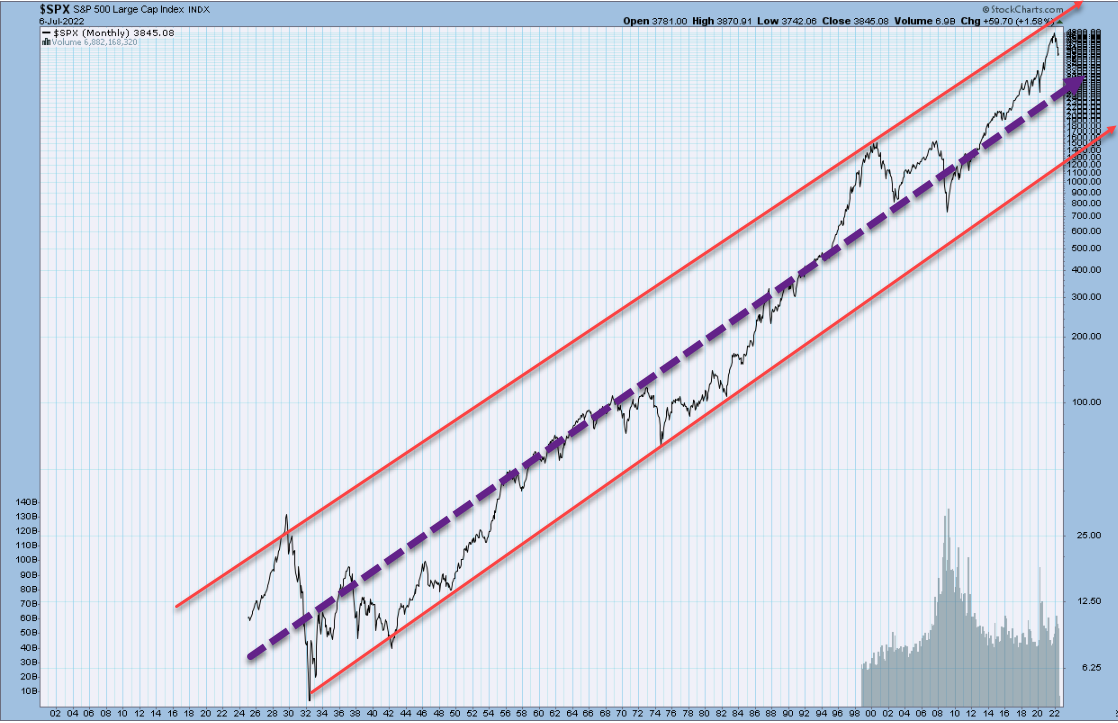 Rule 2: Excesses in one direction will lead to an opposite excess in the other direction

Excess in one direction, often called “parabolic moves”,  is often identified by momentum indicators such as RSI, Stochastics, ROC etc. Another view is to look for an aggressive move off of any established trendline. Such a move is often reversed. Parabolic moves can also be identified by my personal rule (hopefully I will be remembered by a few contributions to TA, this being one of them) of price’s relationship to the 200 day Simple Moving Average. That is, a move of more than 10% over or below the SMA means things will inevitably reverse. The greater the % over, or under 10% off the 200 day SMA, the more likely a reversal.

Below is a chart with a 6- month (long termed) Rate of Change (ROC) in the bottom panel. I’ve drawn green lines to outline established trendlines. I noted in my Technical Analysis Course that such coinciding parabolic moves off of the trendline – coinciding with peaking ROC levels – usually indicate a pullback is coming. This is a chart I posted on the blog last winter – and it proved correct. 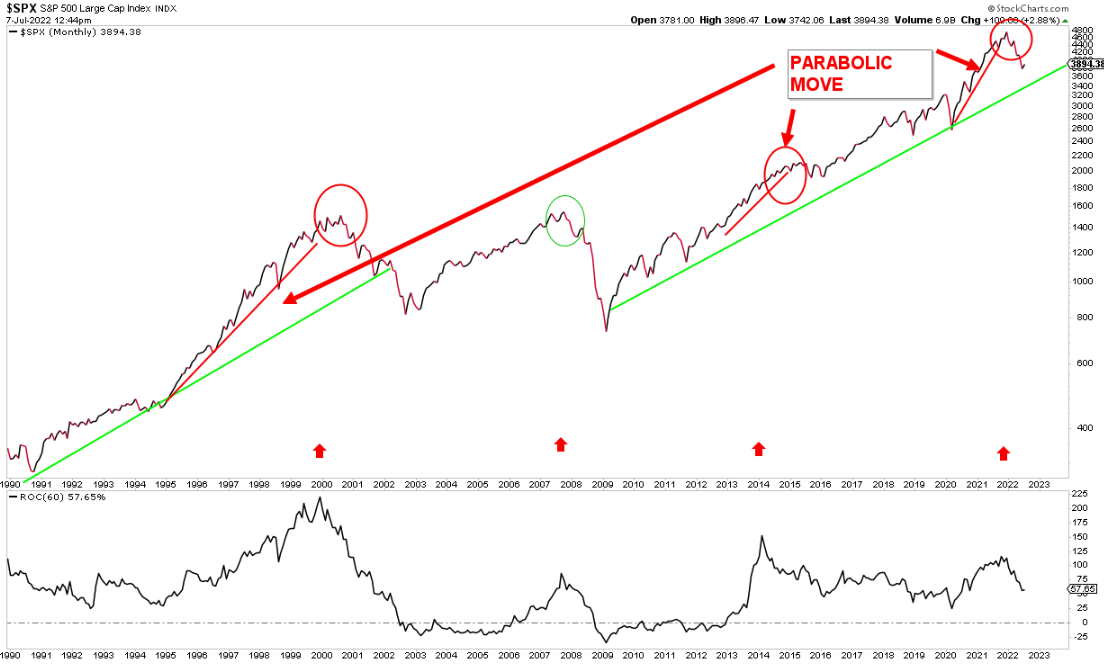 Rule 3: There are no new eras — excesses are never permanent

Bob’s rule #3 was another way of echoing the Great Sir John Templeton’s words: 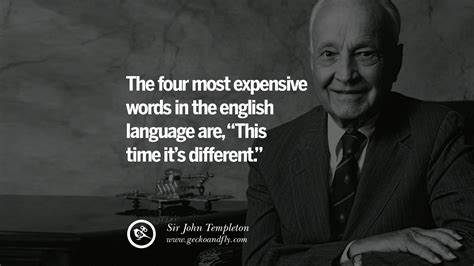 I wrote a blog on May 16th comparing the current bear market to those of 2001 and 2008. Its worth reading if you haven’t. The patterns are so similar, its eerie. This time is not different. There is no new era. Ultimately, this cycle will fulfil its destiny (Star Wars fanatic here, gotta quote the Sith Lord once in a while). We will return to a bull trend – even if it doesn’t last as long as the recent run. If you understand that there is no new era, and this time isn’t different, you can trade the commonalities. Patterns repeat. Take advantage of them.

Rule 4: Exponential rapidly rising or falling markets usually go further than you think, but they do not correct by going sideways

Actually, gotta disagree with Bob on this one. Stocks and markets correct their excess (up or down) in many ways, including sideways consolidations. In fact, a reader just inspired me to re-write a blog on long termed sideways markets – something I have written about in my books, and on blogs several times over the past 20 years. Anyhow, sideways moves often correct excess movements on markets and stocks. Here is only one example (AMZN). Note the parabolic moves just prior to the sideways periods. Interestingly, we’ve just seen a parabolic downside move on the stock. It looks like its setting up for another sideways consolidation, don’t you think? This might tie into my belief that when the current bear ends, it will be tech stocks that make the first move up.

Rule 5: The public buys the most at the top and the least at the bottom

Well, you KNOW I’m going to agree with this! As you know, I wrote the book on contrarian investing! Contrarian is my middle name.

Here’s the AAII bears-only index. The AAII is the public/ non professional investor. Red arrows show too few bears, a bad omen. Black arrows show too many bears, a good omen. Bearish near the bottoms, bullish at the tops. Just as Bob said. We’re in that “too bearish” zone now. But we need chart confirmation before we get too excited. 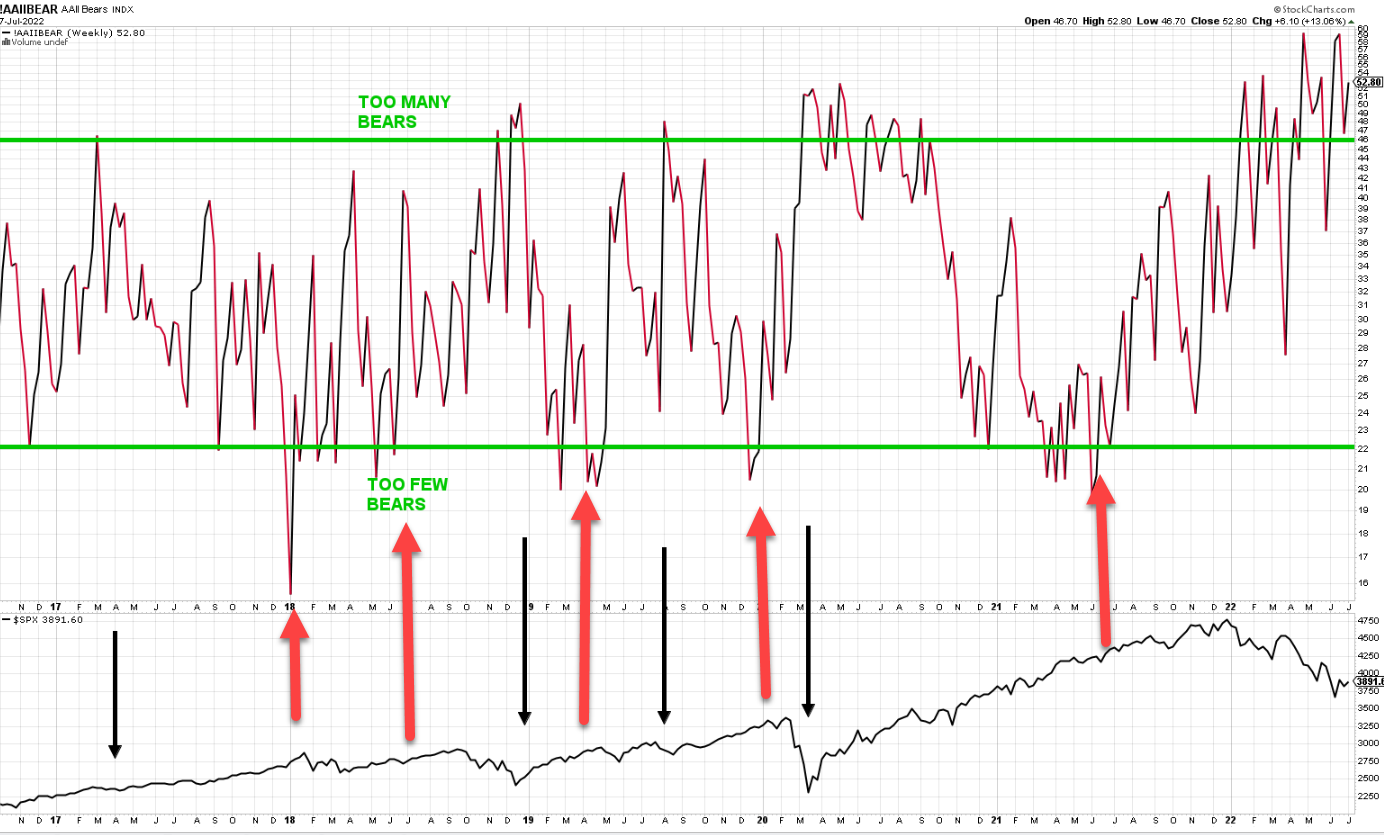 Rule 6: Fear and greed are stronger than long-term resolve

Yeah, that’s why this stuff happens to nice people who buy the SPX and other securities. Does anyone honestly think these big moves came from earnings revisions???

Rule 7: Markets are strongest when they are broad and weakest when they narrow to a handful of blue chip names

That’s called breadth. Below is the % of stocks in the SPX that were trading above their 50 day SMA’s. Notice how that percentage was falling in 2021 EVEN THOUGH THE SPX WAS RISING STEADILY !!! That’s because the market was rising on mainly one thing: growth stocks. Post COVID, stay inside, buy online, etc.  I blogged on that ALOT in 2021. As Bob said, that “handful” of rising stocks doing all the work just ain’t healthy.

A is the first leg, B is the second leg, C is the final drawn-out leg.

Good news, we are likely in the final drawdown! Bad news. It isn’t over yet. Until the trend rectifies, that is.

Rule 9: When all the experts and forecasts agree – something else is going to happen

Absolutely agree with this one!

Lets look at two groups of experts. First: The NAAIM (National Association of Investment Managers) shows us what the investment experts are doing – by looking at their % exposure to the stock market (vs cash). They were heavily in cash as the market went down (a good thing) in 2008 – but stayed out and missed the bottom in 2009. They went to cash right at the moment of the 2011 summer correction. Bad timing. Same thing with the short termed 2015 correction, missing out on a buying opportunity.

To their credit, Investment Managers were heavily exposed to the market in Trump’s first year when he offered favorable market and business policies to drive the markets. And they had high exposure last year during the bull market. They played the recent bear by then reducing exposure as the market entered the bear. So they aren’t so wrong all the time.

Bob was likely talking about the media when he used the term “experts”. Media writers like to pretend they are experts. My view: If they were experts, they wouldn’t be writing articles for a fraction of the salary that an effective Investment Manager can make. So to me, these media people are the “experts” we want to watch for contrarian indications of market direction. They are the dumb-money in the “expert” classification.

Sentimentrader has done studies showing how headline news that’s very bullish or bearish coincides with market tops and bottoms respectively. Their website posts a “Daily News Sentiment Index”. This is a measure of economic sentiment based on computer analysis of economics-related news articles. The index constructs sentiment scores for economics-related news articles from 16 major U.S. newspapers compiled by the news aggregator service. Below, you will note that the headlines (low line) coincides nicely with major market bottoms, as I marked with boxes. Wrong, at the wrong time.

Of note – we are not at a “too bearish news headline” moment yet. Its getting there, but it would appear we are not yet at a coinciding market bottom/ bearish news setup. When we view this study, you can see why I prefer to use quantitative data, like this one, rather than hazard a guess that the news is “too bearish” or investors are “too pessimistic”. We need to know proven, tested, indicators that signal a probable market change.  The data on the chart below is one example of quantifying this process. Bob wouldn’t have had these tools for much of his career, but his concepts can be proven correct with modern data analysis.